At an event today in Beijing, Xiaomi revealed its latest flagship phone, the Mi 6. Like the Mi 5s it’s replacing, the Mi 6 comes with a 5.15-inch 1080p IPS LCD display and benefits from Xiaomi’s attention to design. The Mi 6 will be sold exclusively in China initially, but will find its way to select global markets at a later date.

Style is just as important to Xiaomi as performance, so it’s no surprise it spent most of the event talking about the Mi 6’s updated design and materials. This generation moves back to edge-to-edge glass on the front and back like the older Mi 5, but the frame is now stainless steel rather than aluminum, which should give it a solid, rigid feel. The sides of the glass back are curved like previous models, but Xiaomi has taken the next step with the Mi 6 by curving the top and bottom edges to match. The curved edges flow smoothly into the polished, rounded metal frame, giving the phone a smooth in-hand feel. The Mi 6 does not use a curved display, but the 2.5D front glass compliments the rounded sides and back. 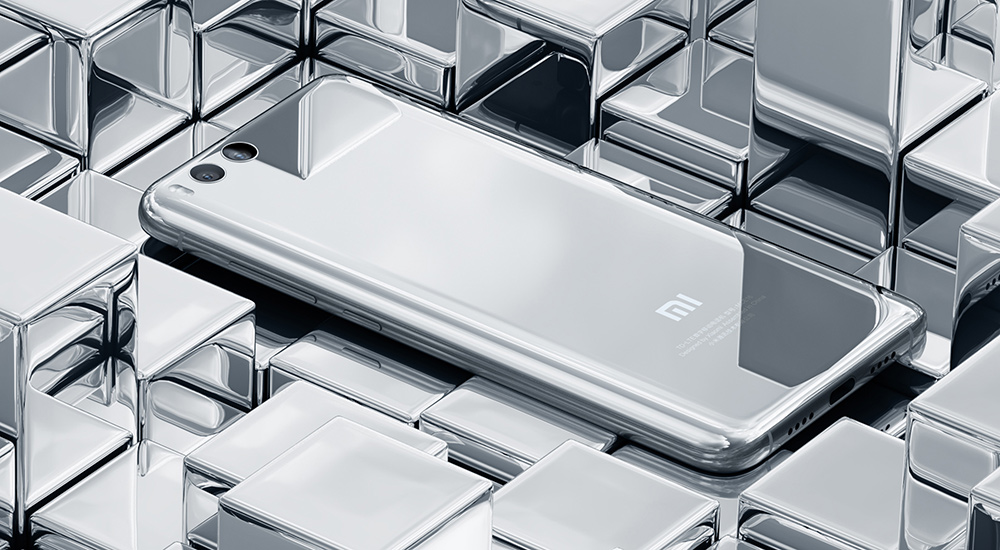 The standard Mi 6 comes in three different colors: Black with matching black front and sides, White with a white front and silver sides, and Blue with a blue front and gold sides. There are also two special edition models; the Silver color still uses a glass back, but the black model with 18K gold accents comes with a ceramic back. All of the colors are polished and highly reflective (and fingerprint magnets) similar to the HTC U Ultra, which is particularly obvious with the Blue and Silver colors that look like shiny chrome. Matching reflective colors are used on the front too, giving the Mi 6 a cohesive design. 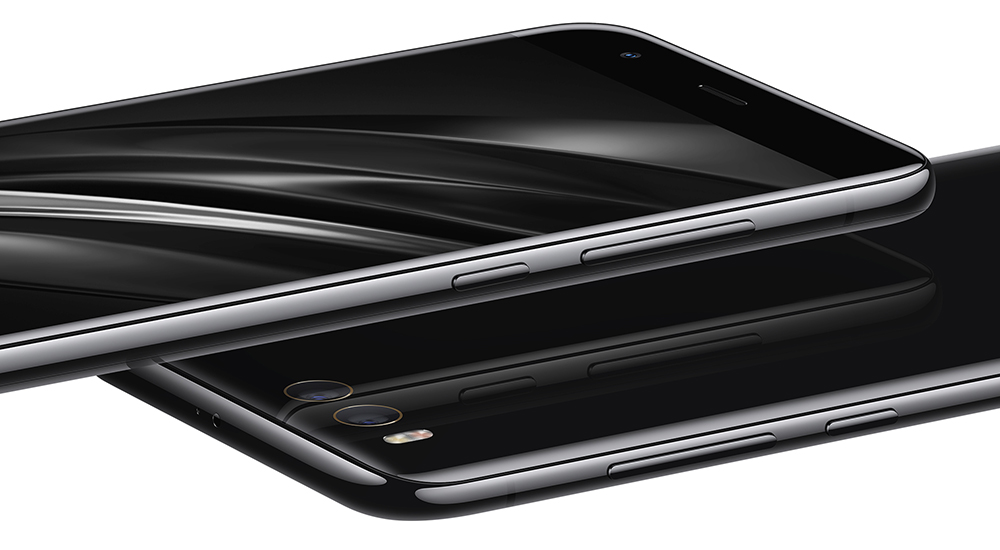 The power button is on the right side just below the single-piece volume rocker, which lines up perfectly with the dual NanoSIM tray on the left side. The USB Type-C port on the bottom supports Qualcomm’s Quick Charge 3.0 fast charging technology and is flanked by a symmetrical series of holes that hide a microphone and a downward-firing speaker. Like the HTC 10, the Mi 6 also uses the earpiece speaker to complement the primary speaker in a pseudo-stereo arrangement. There appears to be an IrLED blaster on the top edge, but you will not find a 3.5mm headphone jack; the Mi 6 joins the growing list of phones omitting the analog port.

The front of the splash resistant but not IP68 rated Mi 6 has relatively large bezels at the top and bottom. The lower bezel has a recessed, non-clickable, pill-shaped fingerprint sensor mounted below the cover glass similar to Huawei’s P10. Xiaomi opted for a balanced look by making the upper bezel the same size as the lower. This design choice also provided enough space to mount the dual rear camera module above the display rather than behind it, allowing Xiaomi to reduce thickness by 0.8 mm to 7.45 mm and increase battery capacity by 5% to 3350 mAh relative to the Mi 5s. The battery boost gives the Mi 6 an advantage over the Huawei P10 (3200 mAh) along with the HTC 10 and Samsung’s Galaxy S7 and S8, all of which come with 3000 mAh batteries and similar sized displays.

The Mi 6’s 5.15-inch 1080p IPS LCD panel reaches a peak brightness of 600 nits, the same as the Mi 5s, according to Xiaomi. It’s not clear, however, if the Mi 6 is also using 16 LEDs in the backlight assembly like the Mi 5s to boost brightness and improve power efficiency, or if it’s using 12 to 14 LEDs like most edge-lit IPS displays of this size. With 4096 brightness levels, instead of the usual 256, display brightness can be adjusted more accurately all the way down to just 1 nit. The extended color gamut panel will show vivid, saturated colors, but Xiaomi generally includes an sRGB mode for people who prefer more accurate colors too.

Packed inside the Mi 6 is Qualcomm’s latest Snapdragon 835 SoC, whose octa-core big.LITTLE CPU configuration uses four semi-custom ARM Cortex-A73 performance cores and four semi-custom Cortex-A53 efficiency cores. In our early testing, it showed a small performance advantage over the Snapdragon 821 SoC in the Mi 5s and Mi 5s Plus when running some common workloads and browser JavaScript benchmarks. There’s also an updated Adreno 540 GPU that delivers around 25% better peak performance on average than the Adreno 530 in the original Mi 5.

The Mi 6 is one of the first phones to use LPDDR4x RAM, which saves power by using a lower operating voltage than the more common LPDDR4. It pairs the Snapdragon 835 with 6GB of RAM and either 64GB or 128GB of UFS NAND, although there’s no microSD support for supplementing internal storage. 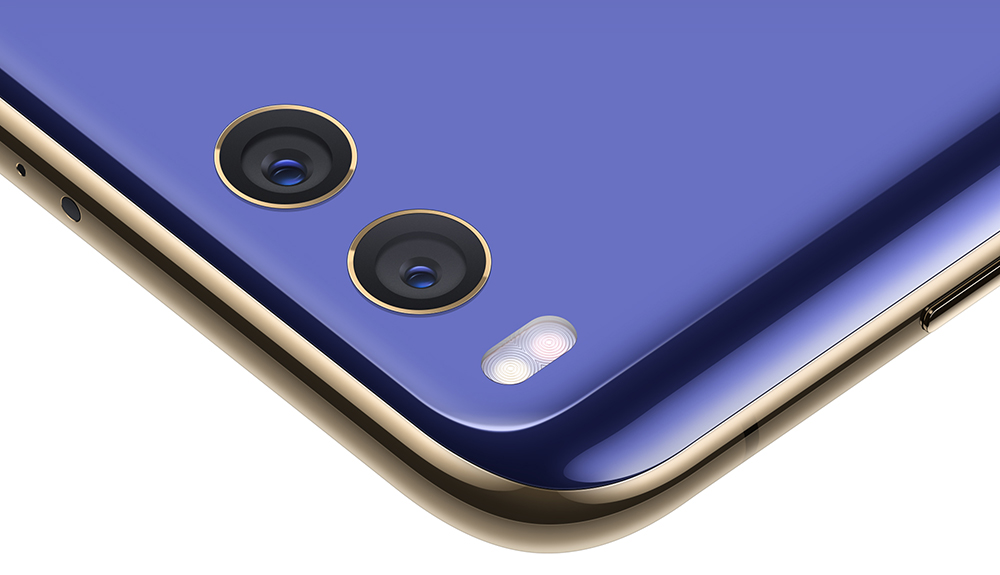 All of the camera hardware is new. Xiaomi did not say much about the 8MP front-facing camera—which improves resolution by a factor of two relative to the 4MP sensor used by the Mi 5 family—but it did offer some details about the new dual rear camera. Unlike the Mi 5s Plus, whose dual rear camera module included both a color and a black-and-white sensor used in tandem to improve image quality, the Mi 6 gives each of its 12MP color sensors a lens with a different focal length to provide different levels of magnification, similar to how the iPhone 7 Plus uses its dual cameras. The primary camera uses a wide-angle lens with a 27mm equivalent focal length, which captures a larger field of view where objects appear smaller than what you see with your naked eye. The secondary camera uses a different 12MP sensor and a 52mm equivalent focal length lens that provides a 2x optical “zoom” where objects appear roughly the same size as they do when viewing them with your eyes. This is not a true zoom lens, however, because any zoom level between 1x and 2x or greater than 2x is still using digital zoom. The two cameras can also be used to create a depth-of-field bokeh effect that blurs the background of photos.

The primary rear camera supports PDAF for faster autofocus performance and comes with the 4-axis OIS system previously seen on the Mi 5, which should improve low-light image quality. An f/1.8 lens, which allows more light to enter the camera, and larger-than-average pixels should also help improve image quality. The secondary camera’s “zoom” lens is slower at f/2.6—a byproduct of its longer focal length—and does not appear to have OIS, which may limit its usefulness in lower-light conditions. 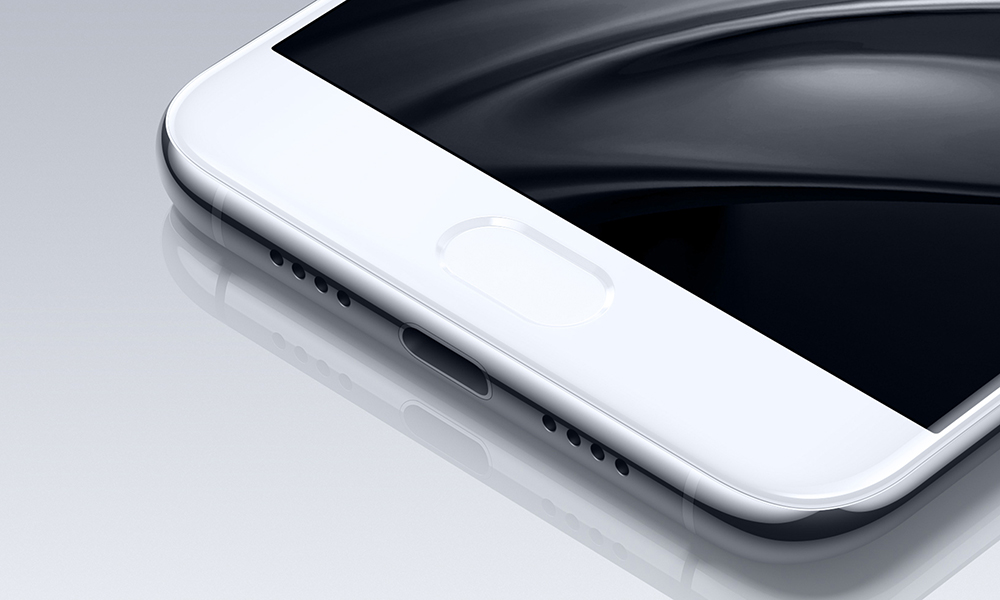 The Mi 6 will be available in China on April 28 at Mi.com and Mi Home stores. The versions with 64GB of storage will cost ¥2499, while the 128GB models will cost ¥2899. The special ceramic edition with 18K gold accents around the rear cameras will cost ¥2999. The larger Mi 6 Plus that was rumored to be launching alongside the Mi 6 did not materialize, however. It’s possible it will be announced in the near future when Xiaomi is ready to expand sales of the Mi 6 to additional markets.