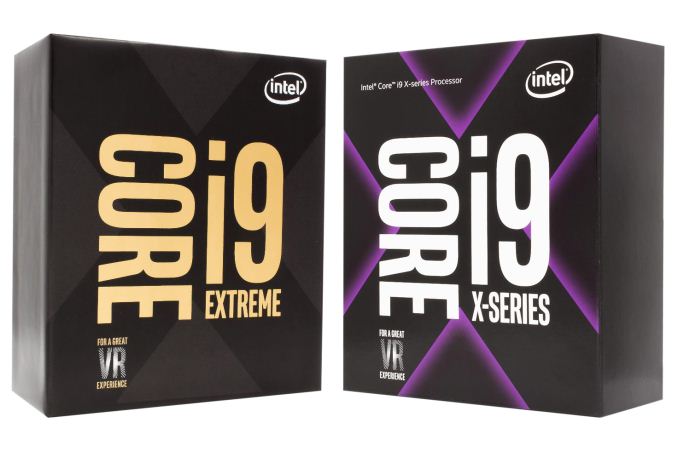 There are days in this profession in which I am surprised. The longer I stay in the technology industry, they become further and further apart. There are several reasons to be surprised: someone comes out of the blue with a revolutionary product and the ecosystem/infrastructure to back it up, or a company goes above and beyond a recent mediocre pace to take on the incumbents (with or without significant financial backing). One reason is confusion, as to why such a product would ever be thought of, and another is seeing how one company reacts to another.

We’ve been expecting the next high-end desktop version of Skylake for almost 18 months now, and fully expected it to be an iterative update over Broadwell-E: a couple more cores, a few more dollars, a new socket, and done. Intel has surprised us with at least two of the reasons above: Skylake-X will increase the core count of Intel’s HEDT platform from 10 to 18.

The Skylake-X announcement is a lot to unpack, and there are several elements to the equation. Let’s start with familiar territory: the first half of the processor launch. 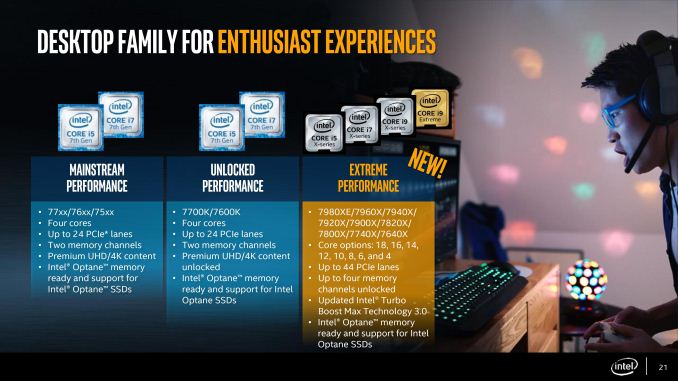 The last generation, Broadwell-E, offered four processors: two six-core parts, an eight-core part, and a top-tier 10-core processor. The main difference between the two six-core parts was the PCIe lane count, and aside from the hike in pricing for the top-end SKU, these were iterative updates over Haswell-E: two more cores for the top processor.

This strategy from Intel is derived from what they call internally as their ‘LCC’ core, standing for ‘low core count’. The enterprise line from Intel has three designs for their silicon – a low core count, a high core count, and an extreme core count: LCC, HCC, and XCC respectively. All the processors in the enterprise line are typically made from these three silicon maps: a 10-core LCC silicon die, for example, can have two cores disabled to be an 8-core. Or a 22-core XCC die can have all but four cores disabled, but still retain access to all the L3 cache, to have an XCC processor that has a massive cache structure. For the consumer HEDT platform, such as Haswell-E and Broadwell-E, the processors made public were all derived from the LCC silicon.

The bottom processor is the Core i7-7800X, running at 3.5 GHz with a 4.0 GHz turbo. This design will not feature Intel’s new ‘favored core’ Turbo 3.0 technology (more on that below), but will have six cores, support quad-channel memory at DDR4-2400, come in at a TDP of 140W, have 28 PCIe lanes, and retail for around $400. This processor will be the entry level model, for any user who needs the benefit of quad-channel memory but perhaps doesn’t need a two-digit number of cores or has a more limited budget.

Next up is the Core i7-7820X, which hits a potential sweet spot in the LCC design. This is an eight-core processor, with the highest LCC base clock of 3.6 GHz and the joint-highest turbo settings: 4.3 GHz for regular turbo and 4.5 GHz for favored core. Unlike the previous processor, this CPU gets support for DDR4-2666 memory.

However in another break from Intel’s regular strategy, this CPU will only support 28 PCIe lanes. Normally only the lowest CPU of the HEDT stack would be adjusted in this way, but Intel is using the PCIe lane allocation as another differentiator as a user considers which processor in the stack to go for. This CPU also runs in at 140W, and comes in at $600. At this price, we would expect it to be competing directly against AMD’s Ryzen 7 1800X, which will be the equivalent of a generation behind in IPC but $100 cheaper.

The third processor is also a change for Intel. Here is the first processor bearing the new Core i9 family. Previously we had Core i3, i5 and i7 for several generations. This time out, Intel deems it necessary to add another layer of differentiation in the naming, so the Core i9 naming scheme was the obvious choice. If we look at what the Core i9 name brings to the table, the obvious improvement is PCIe lanes: Core i7 processors will have 28 PCIe lanes, while Core i9 processors will have 44 PCIe lanes. This makes configuring an X299 motherboard a little difficult: see our piece on X299 to read up on why. 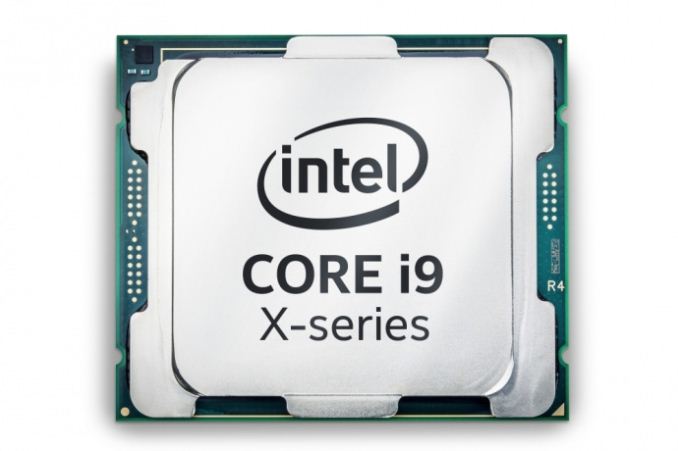 One brain cell to twitch when reading this specification is the price. For Ivy Bridge-E, the top SKU was $999 for six-cores. For Haswell-E, the top SKU was $999 for eight-cores. For Broadwell-E, we expected the top SKU for 10-cores to be $999, but Intel pushed the price up to $1721, due to the way the enterprise processors were priced. For Skylake-X, the new pricing scheme is somewhat scrapped again. This 10-core part is now $999, which is what we expected the Broadwell-E based Core i7-6950X to be. This isn’t the top SKU, but the pricing comes back down to reasonable levels.

Meanwhile for the initial launch of Skylake-X, it is worth noting that this 10-core CPU, the Core i9-7900X, will be the first one available to purch. More on that later.

Still covering the LCC core designs, the final processor in this stack is the Core i9-7920X. This processor will be coming out later in the year, likely during the summer, but it will be a 12-core processor on the same LGA2066 socket for $1199 (retail ~$1279), being part of the $100/core mantra. We are told that Intel is still validating the frequencies of this CPU to find a good balance of performance and power, although we understand that it might be 165W rather than 140W, as Intel’s pre-briefing explained that the whole X299 motherboard set should be ready to support 165W processors.

In the enterprise space, or at least in previous generations, Intel has always had that processor that consumed more power than the rest. This was usually called the ‘workstation’ processor, designed to be in a single or dual socket design but with a pumped up frequency and price to match. In order for Intel to provide this 12-core processor to customers, as the top end of the LCC silicon, it has to be performant, power efficient, and come in at reasonable yields. There’s a chance that not all the factors are in place yet, especially if they come out with a 12-core part that is clocked high and could potentially absorb some of their enterprise sales.

Given the expected timing and launch for this processor, as mentioned we were expecting mid-summer, that would have normally put the crosshairs into Intel’s annual IDF conference in mid-August, although that conference has now been canned. There are a few gaming events around that time to which Intel may decide to align the launch to.