It’s kind of funny that the current cover is still called the Type Cover, since the Touch Cover hasn’t been offered for several years now. Regardless, the latest Type Cover to be offered alongside the Surface Pro is a new version of the Signature model. The first Signature Type Cover was added to the Surface lineup shortly after the Surface Pro 4 was released, and it added a touch of luxury with an Alcantara fabric covering the keyboard. 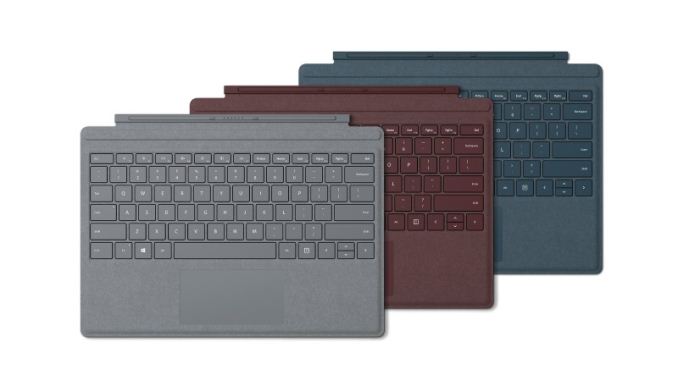 The new Signature Type Cover will be offered in three colors, with Platinum, Burgundy, and Cobalt Blue options. It keeps the same design as the previous models, with 1.3 mm of key travel, and edge-to-edge island keys, so there’s not a lot of discuss there, but luckily the previous generation was already excellent. 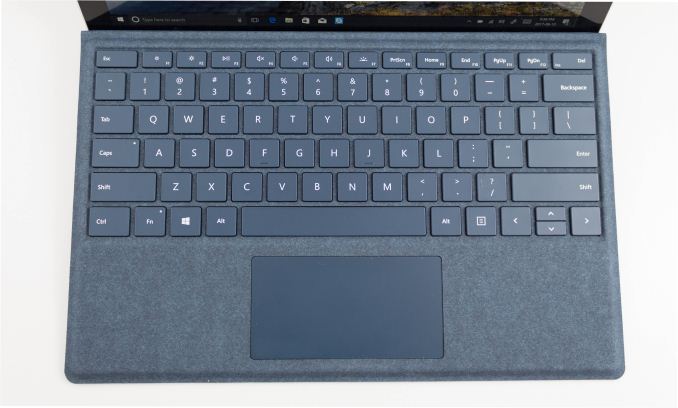 The new Alcantara fabric is also covered with a polyurethane coating to improve durability. There’s certainly going to be some concern about how the fabric cover will hold up after several years of use and abuse, so the new coating should help alleviate some of that concern. The coating should also should help with liquid spills, and cleanup can be done with warm water and a mild detergent if needed. It feels like there’s almost no doubt that over time, the fabric will get a bit beat up, but it really does offer a nice feel when carrying the Surface Pro, or typing.

Microsoft has been actively pushing the pen and inking experience in Windows for several years, so it makes a lot of sense that they would offer it in their own hardware products. They’ve continually improved the pen and ink on Surface for the last several years, and with the new Surface Pro, there is once again a new, improved pen.

That’s always been the easy specification to quote for a pen, but there is a lot more to a pen experience than the levels of sensitivity. For pen fans, they’ll be happy to know that Microsoft has not overlooked those other factors with the latest generation. 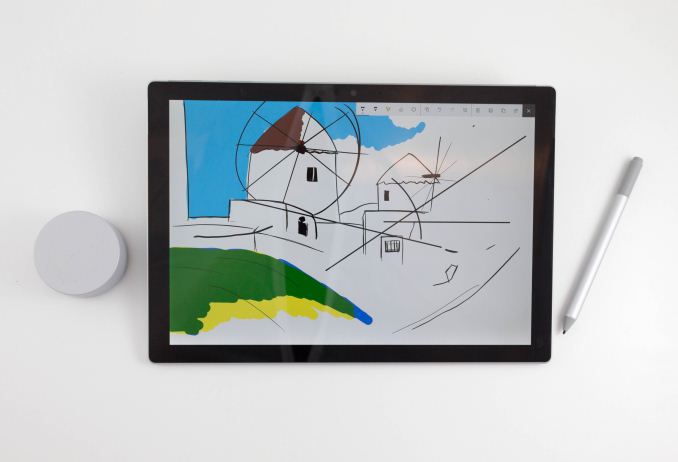 One of the best features of the pen launched with the Surface Pro 4 was the tip feel. Unlike older pens, it offered a bit of traction on the display, and really made it feel more like it was actually drawing on the display. Like the previous pen, the new one also features replaceable tips, giving a choice of wider or thinner pen tips. The new pen keeps that same display friction too, which really makes it feel connected to the display.

Pen latency is arguably one of the most important aspects of a good digital inking experience, and it’s often one that gets less emphasis than other stats like pressure levels, but here the new pen improves again over the previous model, with just 21 ms of latency. Microsoft has a custom display controller to sense the pen, and with the lower latency, the latest generation is easily the best performing pen on Surface yet. One easy test to try is to draw circles on the screen quickly. The Surface Pro 4 would always have the ink lagging slightly behind where the pen was if the speed was moving quickly enough, but the new Surface Pro doesn’t have this issue at all. The ink appears to stay right under the pen.

Another unheralded feature is the amount of pressure required to start drawing, and the new Pen improves this dramatically. The outgoing version required 20 grams of force to be detected, but the new pen is just 9 grams, allowing much lighter drawing and shading options.

Finally, the one piece of the pen puzzle that Microsoft had really been lagging on was tilt support, and with the new pen, that is now available as well.

The pen is still powered by a AAAA battery, rather than being rechargeable, and battery life is expected to be around a year. The new pen also drops the pocket clip, but keeps the ability to stick to the Pro with magnets for transport. It would be nice to see a more solid mechanical device to hold the pen to the Surface, since the magnets are strong but still allow the pen to be dislodged in a bag. But for now, keep a close eye on the pen.

The final change from the Surface Pro 4 is that the pen is no longer included with the Pro. That’s because not all customers were using the pen, and it seems pretty plain that this was done in part to allow Microsoft to cut the cost of the device a bit, as we saw with the price-reduced Surface Pro 4 from earlier this year. Meanwhile for those users who do buy the new Surface Pen, it's available in colors to match the Signature Type Cover.