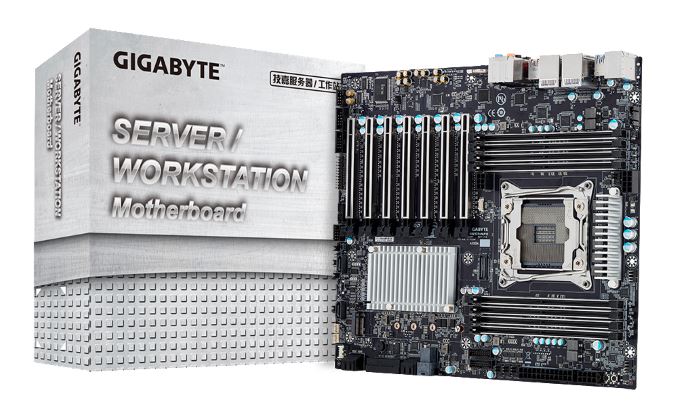 With Intel’s latest release of the Xeon-W processor line, they have bridged the gap between consumer and enterprise platforms once again making cross-compatibility easier. The Xeon Skylake-W CPU addresses these issues and is more or less, a Xeon version of the current Skylake-X processors with all the pro features enabled. Traits such as extended memory support, vPro, Intel’s AMT and the standard enterprise Reliability, Availability, and Serviceability (RAS) features are turned on and ready to go. This new set of processors, despite using the same LGA2066 socket as Skyake-X, will require a new chipset C422 and will not work in X299.

To that end, one of the first boards being released using this chipset was at Computex this year, where GIGABYTE Server showed off a motherboard named C422-WS. The name has changed on that board with today announcing the MW51-HP0. GIGABYTE Server's goal is to bring the Intel Skylake-SP architecture and single-socket platform for workstations to the prosumers and SOHO (Small Office, Home Office) segments that want Intel professional performance. GIGABYTE Server states that this new motherboard offers a "wealth of I/O options, including multiple PCIe lanes to support graphics, storage, and USB options, as well as direct SATA and USB ports." 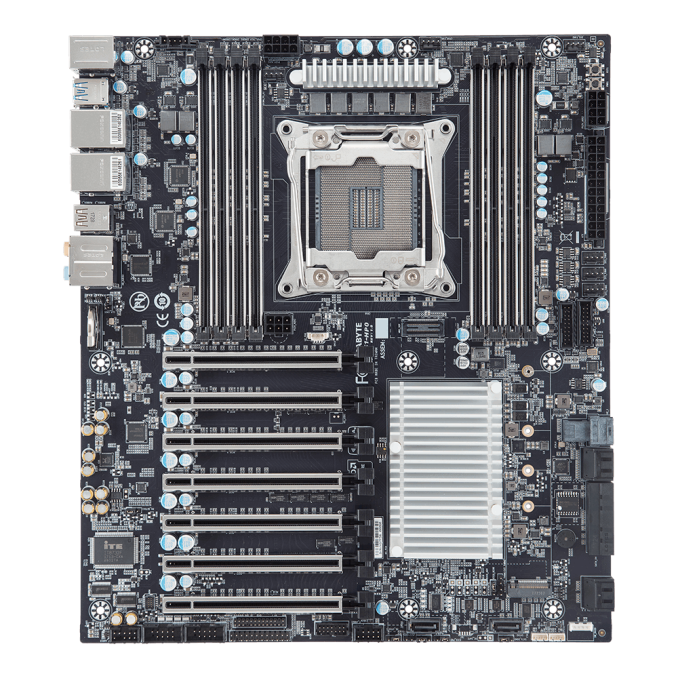 Using Xeon-W CPUs, there are a total of 48 PCIe 3.0 lanes from the CPU to divide up (Skylake-X totaled 44 lanes) or the main PCIe slots, and another 24 PCIe 3.0 lanes from the chipset for add-in functionality. This enables a lot of flexibility in using PCIe based devices. Looking at the block diagram below, the seven PCIe slots have four dedicated PCIe 3.0 x16 slots along with three x8 slots. This would normally give a total of 64 lanes, however the MW1-HP0 uses a PEX8747 PCIe switch chip to multiplex one of the x16 lanes into two main x16 slots, allowing for a total of 64 PCIe lanes. This setup groups six of the seven PCIe slots together in pairs that share bandwidth - stick a card in a PCIe x8 slot, and the slot below it also drops down to x8. As a result, the MW51-HP0 is able to hold four dual slot PCIe cards, or a total of seven single slot PCIe expansion cards. 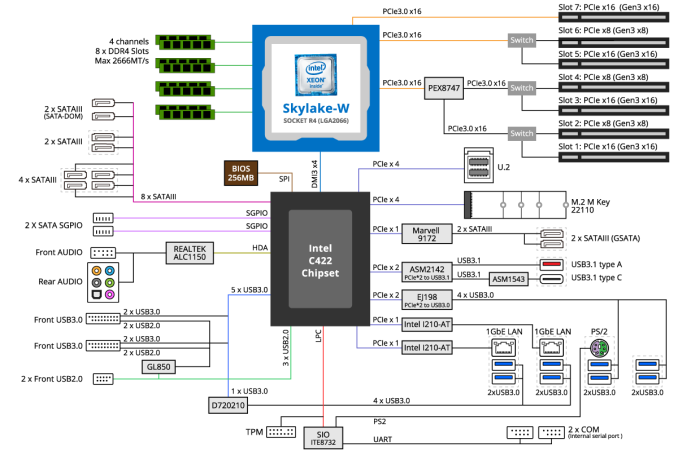 On the Rear I/O, users will find a PS/2 port, eight USB3.0 ports, two USB3.1 ports (one Type-A and one Type-C), the two Intel I210 based Gigabit Ethernet ports, and the audio stack running off the Realtek ALC1150 CODEC.

For storage purposes, the board is equipped with a total of 10 SATA ports. Eight come directly from the chipset, with two of those being SATA-DOM capable (also 2x SATA DOM SGPIO connectors), while the other two are driven by a Marvell 9172 Controller. Onboard, there is one M.2 slot and one U.2 slot both using PCIe x4 bandwidth from the chipset for high-speed boot purposes. The MW51-HP0 supports Intel software based RAID (0/1/10/5) for the SATA ports. If a user needs RAID NVMe drives, the board does come with a VROC module for PCIe RAID management. Place the module in the VROC port to unlock PCIe RAID options. 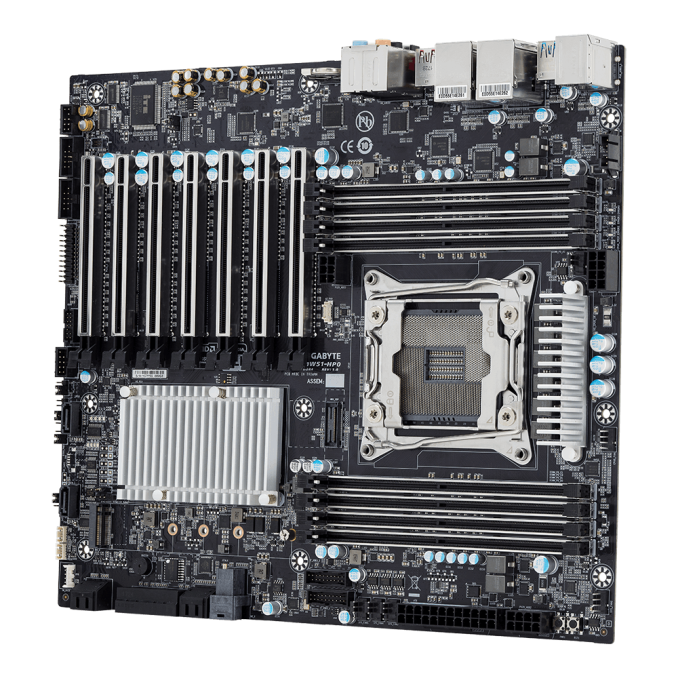 The MW51-HP0 has eight DIMM slots on the board supporting up to 512GB of DDR4 memory using 64GB LRDIMMs (256GB using 32GB RDIMM) in a quad channel configuration. Speeds up to 2666 MT/s can be used.

Pricing nor availability was listed at the time of publication, however we do expect to see this I/O laden, single-socket high-end workstation motherboard on the market soon.

A Quick Recap on Xeon-W