Insights into DDR5 Sub-timings and Latencies 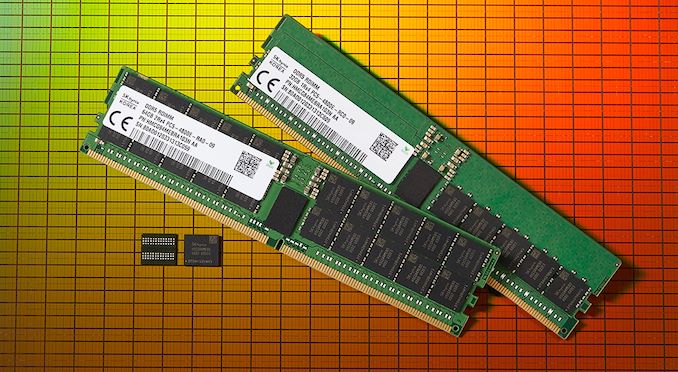 Today we posted a news article about SK hynix’s new DDR5 memory modules for customers – 64 GB registered modules running at DDR5-4800, aimed at the preview systems that the big hyperscalers start playing with 12-18 months before anyone else gets access to them. It is interesting to note that SK Hynix did not publish any sub-timing information about these modules, and as we look through the announcements made by the major memory manufacturers, one common theme has been a lack of detail about sub-timings. Today can present information across the full range of DDR5 specifications.

When discussing memory, there are a few metrics to consider:

When building a platform, a number of these factors all come into play – a system that implements oil and gas simulations might require terabytes of memory, regardless of power, of for smaller installations price might be the major concern. For specialist applications, persistent memory might be a focus, or a combination of bandwidth/latency will be key to driving performance.

In order for all these companies that build memory and systems to work together, a set of standards are developed by a consortium of all interested parties – this is called JEDEC. JEDEC creates the standards to ensure support for all compliant systems.

Users who are familiar with JEDEC specifications will note that consumer grade memory is often specified faster than what JEDEC lists – this is a feature in which processors that can support faster memory, when paired with memory qualified to be faster than JEDEC, can be paired together. This is why we see memory kits all the way up to DDR4-5000 in the market today that only work with a few select systems.

These are typically reported as CAS-tRCD-tRP with tRAS sometimes added on. This means that in JEDEC’s DDR4 specification, the base DDR4-3200 metric allows for a 24-24-24 set of sub-timings. For latency calculations, we need both the data rate (3200 MT/s) and the CAS (24 clocks) to calculate the CAS in terms of nanoseconds, the real world latency (in this case, 15 nanoseconds).

Pivoting to DDR5, JEDEC has enabled standards ranging from DDR5-3200 to DDR5-6400. It also has placeholders up to DDR5-8000, however the specifics of those standards are still a work in progress. At the end of DDR3, and through DDR4, JEDEC introduced additional sub-timing specifications for each data rate - for each of the data rates, JEDEC has specified an ‘A’ fast standard, a ‘B’ common standard, and a ‘C’ looser standard – technically the looser standard is more applicable to higher capacity modules. It means that each data rate can cast a wide range of performance based on the quality of the silicon used.

Starting with the lowest data rate, the DDR5-3200A standard supports 22-22-22 sub-timings. At a theoretical peak of 25.6 GB/s bandwidth per channel, this equates to a single access latency of 13.75 nanoseconds.

Here is the full list, from DDR5-3200 to DDR5-6400, including some of the extra standards not yet finalized.

You may remember our report in May 2018, where Cadence and Micron showed off some DDR5-4400 memory in a test platform. We were able to determine from the photographs provided that this system was running at a CAS Latency of 42 clocks. Since then, the JEDEC standard has come down in that speed bracket to support 32-40 clocks, indicating the evolution of the platform.

The table above is a bit cumbersome, so here's the same table showing only the 'A' fastest specifications for each data rate. This likely applies for any installation of the equivalent of 1 module per channel.

In terms of single access latency, we are ultimately not going to be any faster than we were by the end of the DDR3 era. DDR3-1866 at CL13 was already at 13.93 nanoseconds. This means that despite the increasing CAS latency values in clocks (going to CL46 at DDR5-6400), the actual single access latency is still roughly the same in real world time units.

It is interesting to note that the DDR5 specification has provision in the hardware registers for CAS Latencies from CL22 up to CL66. This might be interpolated to mean that even with a sufficiently binned DDR5 memory module, or with overclocking, CL22 might be the lowest possible for the hardware. We know that DDR5 now moves the voltage regulation for the memory onto the module, so that will be an additional area for memory manufacturers to differentiate themselves, especially when targeting the enthusiast market.

For users looking for an insight into how DRAM actually works, then I would like to direct you to our 2010 article entitled 'Everything You Always Wanted To Know About Memory (But Were Afraid To Ask)'. It's a great technical article that I still refer back to, and I still scratch my head over!