At CES 2021, Phison gave us the usual updates on their SSD controller roadmap. The most significant new products coming this year are a pair of USB flash drive controllers for high-end portable SSDs, designed to compete against current solutions that combine a USB to NVMe bridge chip with a standard NVMe SSD controller. Phison is also planning to introduce a new entry-level DRAMless NVMe SSD controller later this year. 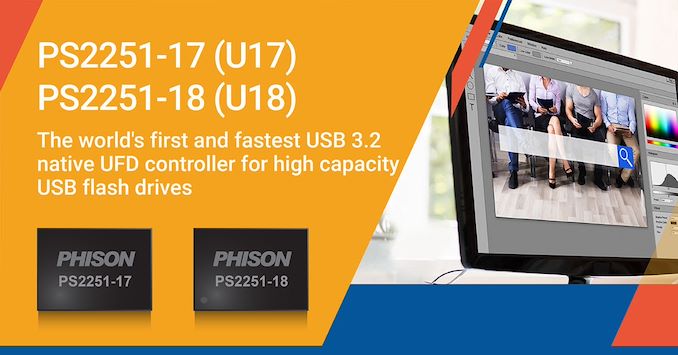 For portable SSDs, Phison is introducing the U17 and U18 controllers. The U17 uses a USB 3.2 Gen 2x1 (10Gb/s) host interface and a two-channel NAND interface running at up to 1200 MT/s. The U18 doubles these: USB 3.2 Gen2x2 (20Gb/s) and a four-channel NAND interface. The performance specs may look lackluster compared to Phison's NVMe SSD controllers, but they are pretty close to saturating what their respective USB host interfaces can handle, and performance will be competitive with NVMe+USB bridge based portable SSDs. However, the U17 and U18 will have a significant power efficiency advantage, lower cost and smaller PCB footprint than existing portable SSDs. Phison will also be providing TCG Opal encryption support on the U18, enabling a level of security they say is impossible to achieve with NVMe+USB bridge solutions.

Phison expects to finish qualification of the U17 and U18 controllers later this month. We're hoping to get a performance preview shortly thereafter by testing their reference designs, and retail products should be showing up within the next several months.

For NVMe SSDs, the only new controller Phison is talking about this year is the E21T, their latest DRAMless NVMe controller. This is a follow-up to the E19T controller, which has seen very little use in retail consumer SSDs but has actually been outselling their high-end E16 PCIe 4.0 controller due to strong demand from OEMs (especially from an unnamed customer with a very popular gaming product). With the E21T, Phison is finally moving this product segment from 28nm to 12nm fabrication, which allows for performance and power improvements of about 25% compared to the E19T. The basic architecture hasn't changed much for the E21T: it's still a 4-channel controller managed by a single ARM core plus Phison's proprietary coprocessors. Performance has increased significantly, with peak throughput now rivaling the high-end E16 controller (though real-world performance on heavy workloads may still be slower due to the downsides of a DRAMless controller design).

Phison is planning to start sampling the E21T to customers around June of this year with mass production ramping up in Q4—around when we should start seeing PCIe 4.0 SSDs catching on with notebook OEMs. Most of the drives using the E21T will probably pair it with QLC NAND, and Phison has performance projections for what we can expect when using Micron's 176L QLC.

It's likely that many of the product lines currently using the E16 controller with QLC NAND will switch over to using the E21T in future generations, since the DRAMless E21T will be a cheaper overall solution. However, the 4TB limitation will be an issue for the handful of companies that have already started shipping 8TB QLC SSDs. Those 8TB M.2 SSDs currently use the E12 controller and its PCIe 4.0 successors are not available in a reduced-size package like the E12S variant. So 8TB PCIe 4.0 SSDs will probably have to push the limits of NAND packaging by stacking 16 dies per package in order to leave enough PCB space for an E16 or E18 controller plus DRAM.

For high-end NVMe SSDs, Phison's E18 finally started shipping in late 2020. Phison is pretty proud of this controller, and makes much of the fact that they're the only ones so far hitting at least 7GB/s for both reads and writes. Phison plans for the E18 to be their last flagship PCIe 4.0 controller; they're already looking forward to PCIe 5.0, and the E18 will remain their top of the line controller for probably another two years. This doesn't mean Phison is entirely done with the E18. They're still working on firmware tuning, especially around thermal management and trying to squeeze out a little bit more performance at low queue depths. There will also be continuing firmware updates to support newer generations of 3D NAND flash memory. Current E18 drives are using Micron 96L TLC, but Micron has started production of their 176L NAND. Phison expects to finish qualification with that NAND in March, so a second round of E18 drives should start arriving in April with 10-15% performance improvements.

Phison's older E13T controller is also still around as a low-cost and low-power solution for entry-level NVMe applications. It's particularly popular as a controller integrated into BGA SSDs, where it helps displace eMMC storage is devices like Chromebooks, tablets, and maybe even some smartphones.

Interested in more of the latest industry news? Check out our CES 2021 trade show landing page!