The 2X we received came in packaging that obviously isn't final, but that isn't what's important at this point. Included is a microHDMI type D to full size HDMI type A cable about 6 feet in length, USB power adapter with type C AC plug, microUSB cable, and of course the smartphone itself with included battery. There's no microSD card provided, but that's admittedly somewhat mitigated by the presence of 8 GB of internal storage which looks just like an SD card to Android. 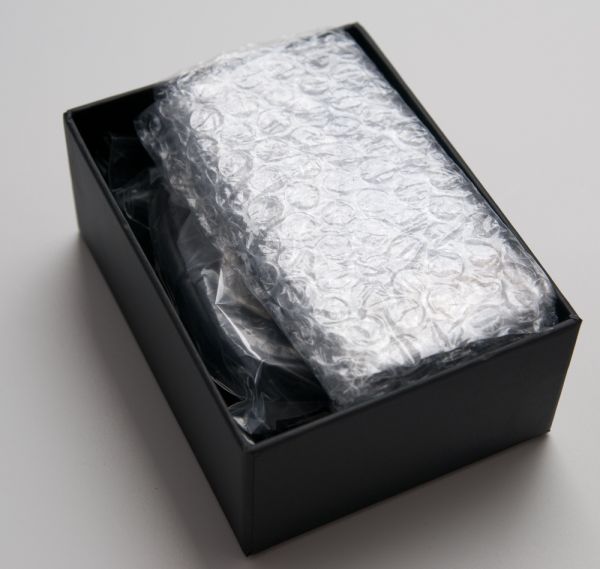 Hardware feel is just how we left it at CES. The 2X's back is a brown soft touch material with a metallic strip running along the center. The "with Google" text is engraved into the strip, which has a gentle slope leading to the camera bulge. 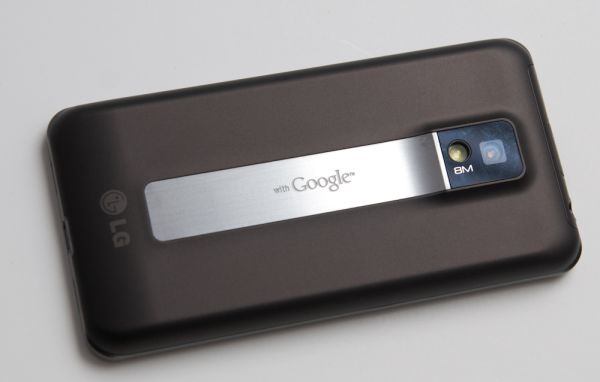 The camera area is raised a few mm above the rest of the device—it's reminiscent of the Droid X's camera bulge but not nearly as dramatic. The 2X's battery cover is removed by jamming your thumb in a slot at the bottom and tearing it off—plastic snaps around the edge hold it in place. 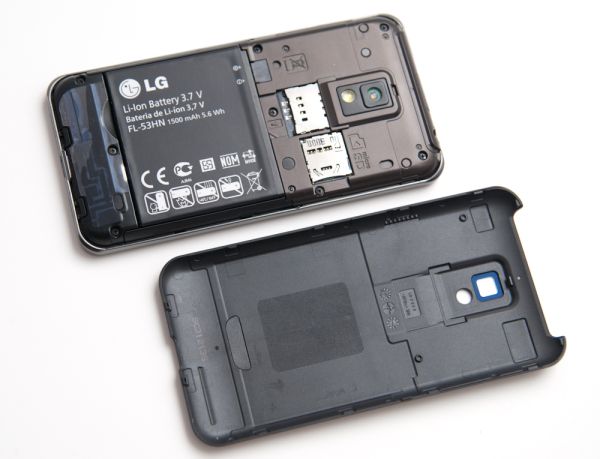 The 2X puts the battery cover in-between the last vertex of the camera and object space, one of the things we've complained about the Nexus One and other devices doing which basically provides an additional two more surfaces for fingerprints and grime to happen and add glare. The odd part is that the LED flash port on the battery cover is literally just a hole—this is a perfect place for dirt and pocket lint to get under and inside the battery cover.

With the battery cover off you can see the 2X's 5.6 watt-hour battery, SIM slot, and microSD card slot. The microSD position means that you can take the SD card out with the device turned on, and the slot is of the click-to-eject sort. There's no obvious port for a rear microphone, so there's likely no dual-microphone noise rejection for calling on the 2X.

The 2X is ringed by a silvery metallic plastic, in fact all of the 2X exterior is plastic. The right side of the 2X is home to the volume up and down buttons, which are discrete, clicky, and otherwise perfect.

At the bottom is the microUSB port, and two meshed ports which are reminiscent of the iPhone's design language. The left port is the microphone, right side is the speaker port. 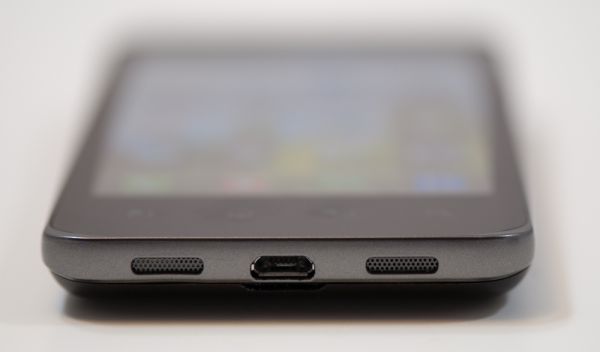 Up top is the power and lock button, in-between is the microHDMI port for HDMI mirroring. There's a snap-off door held on by another piece of plastic which lets the door come off and swivel without totally detaching. To the right is the 1/8" headset jack. The rear of the jack is at a bit of an angle, so some of the connector shows through, but it's not a big deal and the jack works fine.

The front of the 2X is one continuous glass surface. The left and right sides of the display are curved gently in one axis, but nonetheless a noticeable amount. The majority of the display surface used for actual display and interaction is actually flat. Only at the extreme edges is there curvature. It's a bit reminiscent of the Dell Venue Pro, but nowhere near as extreme or pronounced.

The curvature, while attractive, has a downside. That downside is that the surface of the display is essentially defined by the two ridges formed right at the curvy parts—already vertical scratches have been accumulating right at those places. Obviously this is only a problem if you set the phone front-down. 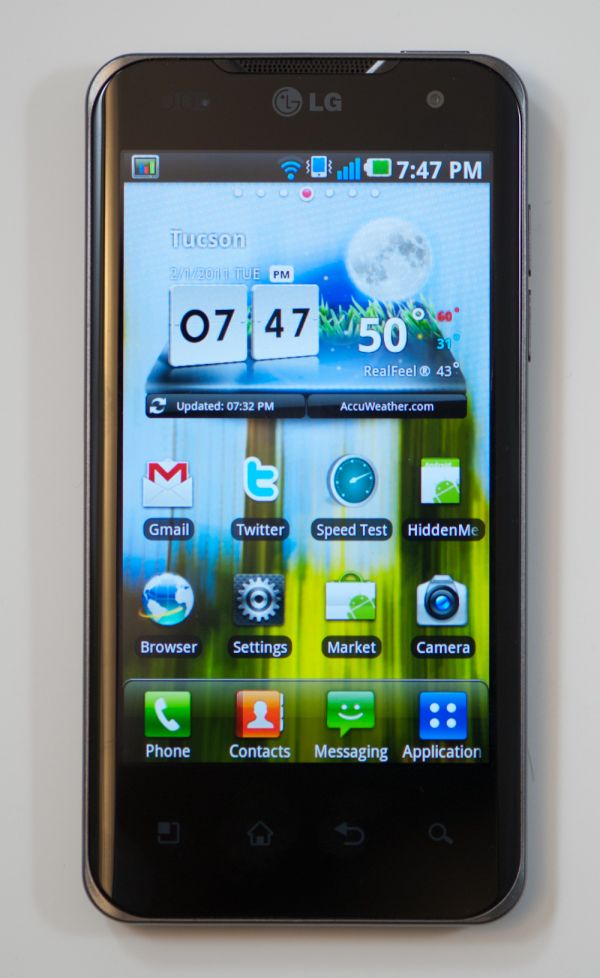 The 2X's front facing camera is up at the top right. On the left, faintly visible are the two proximity sensor and ambient light sensors. At the top extreme is the main earpiece.

There are no status LEDs on the front of the device or tucked away under the speaker grille on the front like the EVO. 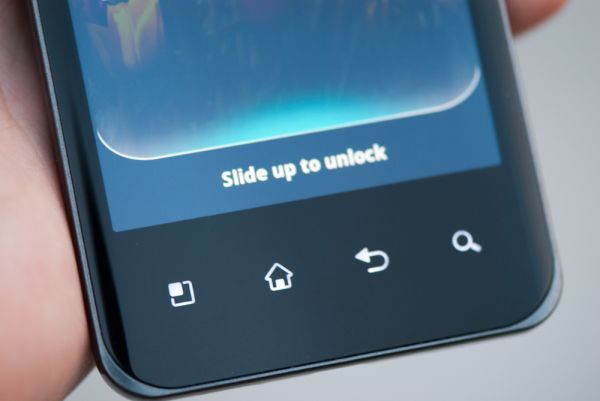 Unlike the Korean version, the P990 model has all capacitive buttons below the display. They're in the same order as the Galaxy S Fascinate, but a different order from everything else except other LG phones. They're all backlit, and there's no light leakage around the icons. There's a generous amount of space above and below the buttons, almost too much extra space. Either LG is leaving room for a carrier logo silkscreen, or else just making things easier for people with gigantic fingers. 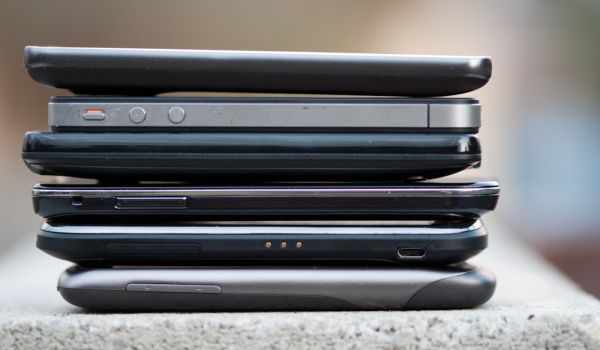 The 2X is dimensioned appropriately for the class of 4-inch screened displays it fits in. Thickness is just shy of 11 mm, which is essentially identical to the Nexus S we just reviewed. It's still thicker than the iPhone 4, but not dramatically so. The camera bulge is really what contributes to thickness—the vast majority of the 2X is a millimeter thinner. Weight is specced at 139 grams, we measured it at a slightly heavier 144 grams. It isn't unnervingly light like the Galaxy S series of phones (sans the Epic) were, but rather just right. In-hand feel is actually excellent—I found that the phone naturally sat in the hand so that my index finger rested on the curved ridge just below the camera, balance also was just fine in the palm.

The 2X's build is quite good, there's no flexing or creaking, no rattling when SMSes come in and the phone vibrates, either. It doesn't feel fragile, but it still lacks that hand-on-metal solidness that phones like the Nexus One misgive.