I suppose it's fitting that I should be the one to write our PlayBook review. Before Android and the iPhone, there were two mobile platforms/devices that I was hugely fond of: the Palm V and my BlackBerry. In fact, it wasn't until the iPhone that I finally let go of my last BlackBerry - moving on from the email era into the smartphone age.

Today's BlackBerry is of course very different than the devices I used in college. And the PlayBook is unlike anything RIM has ever done. 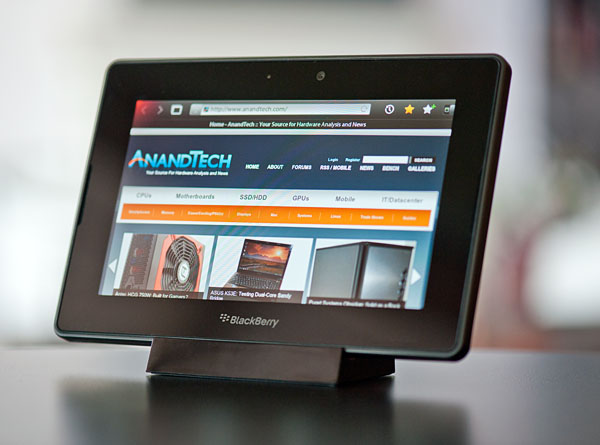 I don't believe any tablet maker has perfected the formula just yet. I made that abundantly clear in our review of the iPad 2. While you can't argue that Apple is the forerunner in the smartphone based tablet space, over the long term I still believe this is anyone's game. Remember, the leaders in the early days of the PC industry weren't the ones who ultimately dominated the mature market.

What follows is our review of RIM's first attempt at building a tablet. The PlayBook is far from perfect, but there's a foundation here that can be built upon if RIM has a good roadmap and good execution. And if you're a BlackBerry user, there's a lot of synergy to exploit.

If we view the primary difference between the first and second generation of smartphone based tablets as being ergonomics and performance, the PlayBook falls squarely in between the two.

At 10mm thick the PlayBook (7-inch display) is more iPad 1 (9.7-inch) or Xoom (10.1-inch) than iPad 2 or Galaxy Tab 8.9, but what RIM lacks in thinness it makes up for in overall size. The PlayBook is an almost-pocketable tablet. Bigger than the 5-inch Streak and even bigger than the 7-inch Galaxy Tab, the PlayBook isn't a pain to port around. The PlayBook is small enough to snugly fit inside the outer pocket of a long men's winter coat or a lady's purse. While I definitely don't carry my iPad everywhere, if it were more functional I could see carrying the PlayBook with me more often than any other tablet. 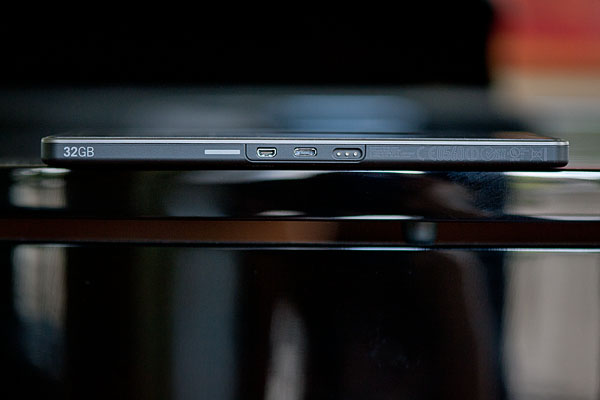 The PlayBook's styling is modest, even for BlackBerry standards. The front has a single BlackBerry logo along the bottom bezel and a visible camera lens but that's it. Around back you've got RIM's logo, a larger lens for the rear-facing 5MP camera sensor and a sea of black. 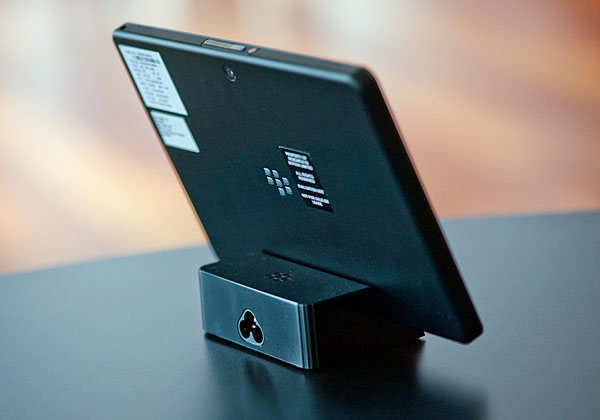 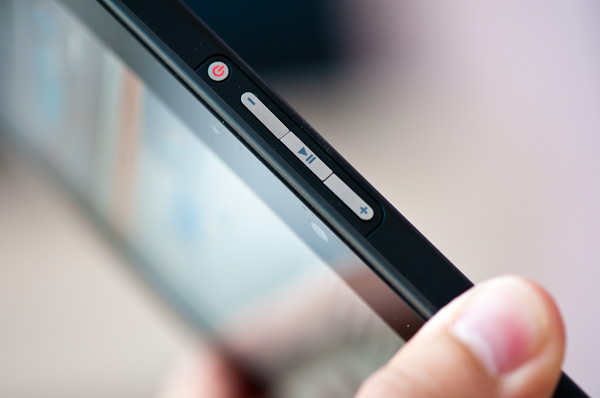 Press and hold the power button and you'll be greeted with a PC-like choice to either power off the PlayBook or restart it. I'm not sure how frequently RIM expects you to do the latter, but when testing it's a nice feature to have.

The volume up/down buttons work as expected, although the volume level itself doesn't seem to be very linear. There's a single 1/8" headphone jack up top, near a port for the PlayBook's microphone.

The PlayBook features a pair of pretty loud stereo speakers on the front of the device. Being used to the iPad's single speaker, the PlayBook's two speakers are nice. 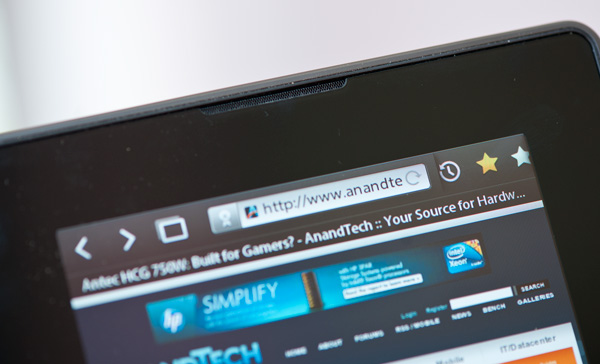 Charging is always an issue on these USB devices. You can take Apple's approach and charge over USB, which unfortunately can take a while to fill up a tablet's battery. You also run into issues with older computers that don't support the USB Charging spec, resulting in charging-only-while-sleeping like the iPad. Then there's Motorola's approach with the Xoom where you don't charge over USB but have a dedicated port for an AC adapter. Charging times are significantly reduced but now you need to carry around an extra adapter with you wherever you go. RIM arrived at what's quite possibly the best solution. The PlayBook will charge over USB and it also features a higher amperage quick-charge port for use with some of its accessories.

The battery is of course not removable and there's no USB port or SD card reader.

The PlayBook is only slightly larger than Samsung's 7-inch Galaxy Tab and maintains the same 7-inch screen size (albeit with a functional border around the screen). Given my complaints about current tablets not being incredibly portable compared to a smartphone, you'd think that I'd love the PlayBook's form factor. To be honest, for portability, I do.

While I'm almost never tempted to bring the iPad with me when I'm going around town, the PlayBook is a far easier sell. It's almost pocketable (and actually pocketable if I'm wearing a big jacket) and isn't too heavy. 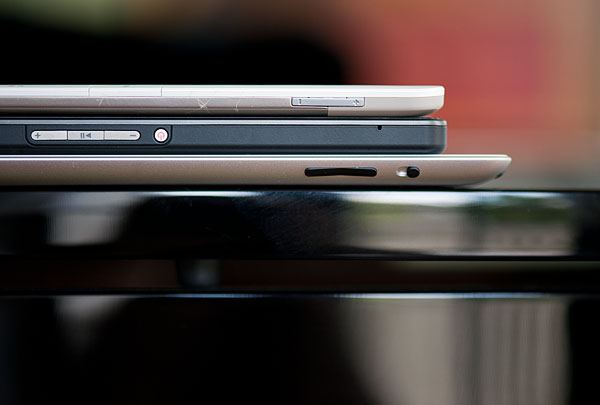 Even when I'm not out and about, the PlayBook is quite usable as a content consumption device. In portrait mode fonts are a bit too small for me to read comfortably on the couch but in landscape it works well as a reddit browsing machine.

It's in the couch-lounging usage model that the PlayBook does fall short of the iPad or Xoom. But in terms of portability the PlayBook is clearly a much better balance of functionality and mobility. If you read between the lines you'll come to the same conclusion I have: neither the PlayBook nor the iPad is the perfect form factor for a tablet. Further more, I'm not sure there is a single perfect tablet form factor.

Apple tends to be a one-size-fits-all company when it comes to iOS. You want a smartphone? That'll be a 3.5-inch screen on an iPhone. Want a tablet? 9.7-inch iPad. It's interesting given how carefully Apple selected its four notebook sizes: 11, 13, 15 and 17-inches. 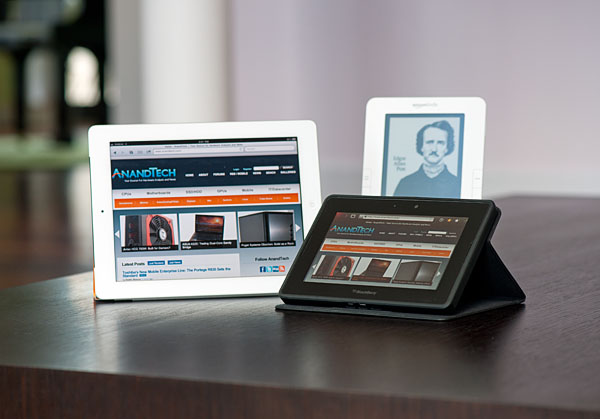 Ultimately I don't think tablets will fall into the one-size-fits-all category. Instead I believe they're ultimately headed for some sort of a convergence with netbooks or notebooks. Today that's difficult to see because they lack a common hardware ISA, OS and even apps, but you don't have to look too far into the future to see those problems going away.

While I appreciate the PlayBook's portability and would definitely carry it around more than an iPad, it's not as nice to use laying back on a couch. The screen is too small to comfortably read in portrait mode and even in landscape things can get a bit cramped.

RIM's market research shows a clear preference for portability, hence the PlayBook's introductory 7-inch form factor. However RIM also pointed out that the BlackBerry comes in all shapes and sizes, indicating that the PlayBook would ultimately be available in different form factors as well. RIM also indicated that the 7-inch PlayBook may not be the smallest size offered either. Clearly RIM views the tablet market much like the notebook market: there will be ultraportables and there will be workhorses, with tons of choice in between. The 7-inch PlayBook is merely a starting point. Assuming RIM can fund the projects, we'll likely see both larger and smaller siblings in the future.