In and Around the IN-WIN BUC

I'll come out and say it: while I don't think it's anywhere near as ostentatious as a lot of gaming-oriented cases can be, the IN-WIN BUC could probably stand a little more understatement. There's no glossy plastic to be found anywhere on this chassis except for a light trim at the top and small side accents, though, and thankfully the lighting is in no way overpowering: the front logo glows red (this can be disabled), and the front fan glows blue. The color scheme is two-toned, with most of the case in black and assembly grommets and trays in a kind of neon yellow-green.

Build materials are the standard plastic and SECC steel one would expect in the price range, but the case feels sturdy and not liable to snap or break anywhere in particular. As we get into this, you'll see places where IN-WIN cut corners to keep costs down and generally speaking they're fairly smart with their approach.

The first thing that struck me when I started playing with the BUC was that it's a largely toolless case design. This is something I think some manufacturers even at the upper end of the field forget we actually appreciate, and what you're going to find is that there's an awful lot of thought given to practicality, ease of use, and flexibility when it comes to this case. The front covers for the 5.25" bays all snap in and out relatively easily, but they're secure enough so they don't rattle and have a squeeze-clamp kind of design that I actually prefer to the drive bay covers I've seen on more expensive cases like Antec's P182/P183 and Corsair's 600T. Practicality is king here.

When you go to open the case up, you'll find that instead of even thumbscrews, IN-WIN has adopted plastic clamps that work surprisingly well. If these aren't to your taste, you can remove them and just use conventional screws/thumbscrews to secure the panels. What I was really pleased with, and a couple of you are going to nod knowingly, is the fact that the side panels slide on and off with a minimum of fuss. I've used a few inexpensive cases where side panels didn't line up quite right or required a lot of force to budge once they were stuck in place.

The main side panel also features ventilation and mounts for two 120mm fans; clearance in the bottom mount is fine for video cards, but there wasn't enough room to put a fan in the top mount with our Zalman CNPS9900 CPU cooler attached. There's a smaller removable piece in the bottom right of the panel that uses a conventional case key; this gives you access to three of the hotswap bays. NewEgg cites the enclosure as having four bays, but that's not entirely true; only the first three can be accessed with the door and the fourth is only accessible if the entire side panel is removed. 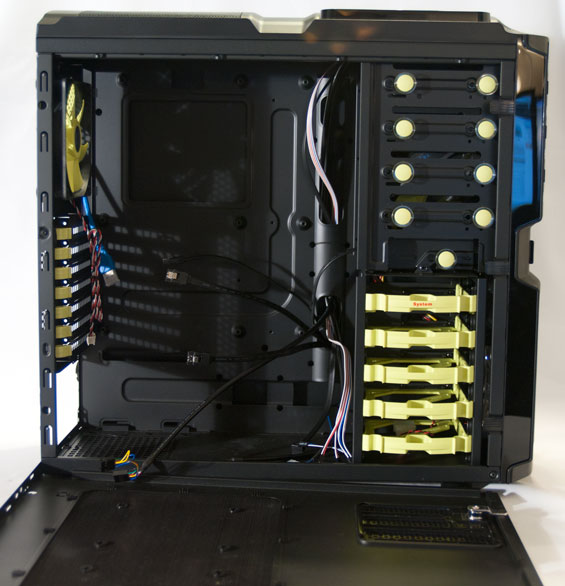 Popping open the BUC reveals a largely toolless interior. 5.25" drives are secured by popping out the neon green knobs, sliding the drive in, and then popping the knobs back in--and you only have to do this on the main side of the enclosure. There's a single knob for the external 3.5" bay, and then there are five 3.5" drive trays, four of which connect seamlessly to a SATA backplane.

The motherboard tray has the standoffs for a full ATX board more or less built in, and amen to that. It's been a long time since I've seen a motherboard that uses any kind of nonstandard standoffs, so not having to install those is welcome. Above the motherboard area is an opening where an additional 120mm fan can be installed; two plastic clamps flex open as you insert the fan, and then it more or less locks into place. This felt a little bit loose to me and is definitely vibration prone.

Finally, the expansion bays include one actual removable slot cover, with the rest essentially needing to be bent and snapped off. That's disappointing, but on the bright side each of these have a clamp that rotates outside of the case: no screwing in expansion cards, and our GTX 580 was remarkably secure using these clamps.