This afternoon (and yesterday) we had a chance to meet with a number of SoC vendors who have partnered with Microsoft for Windows 8. Each of them has their own individual reference tablet running Windows 8, and today we had a chance to survey the landscape and get photos of all the tablets. We started with ARM, then looked at x86 based tablets. Of course, the real goal with Windows 8 is to abstract as much of the difference between these two platforms away.

Unfortunately, all of the ARM vendors were required to keep their tablets under glass and out of the way of physical contact per Microsoft instruction. Microsoft isn't ready to show off the ARM version of Windows 8 for a variety of reasons at this point (at least without a Microsoft rep. present), but we still got a chance to at least take a look at what there is now. Microsoft is encouraging tablet makers to target either a 10.1" or 11.6" form factor with 1366x768 resolution (ed: Metro will require 1024x768 as a minimum, so 1280x720 displays don't meet Microsoft's requirements).

First up is TI, whose development platform was demoed playing back the 1080p30 H.264 baseline video shown in the keynote fluidly in windows media player with a split-screen view. One tablet displayed the start menu, another displayed two split screen games. TI's development platform as shown right now is running on OMAP 4430, which again consists of two ARM Cortex A9s at 1.0 GHz and PowerVR SGX 540 graphics. Windows 8 won't launch on OMAP 4430, however, instead it'll launch on the more powerful OMAP 4470 platform with PowerVR SGX544 graphics and a 2D display compositor. The reason is partly due to SGX544 having full Direct3D 9.3 compliance, partly because it's an all around faster platform. I'm told that right now there's some Direct3D emulation going on as well for all the SoCs that don't support Direct3D 9.3. 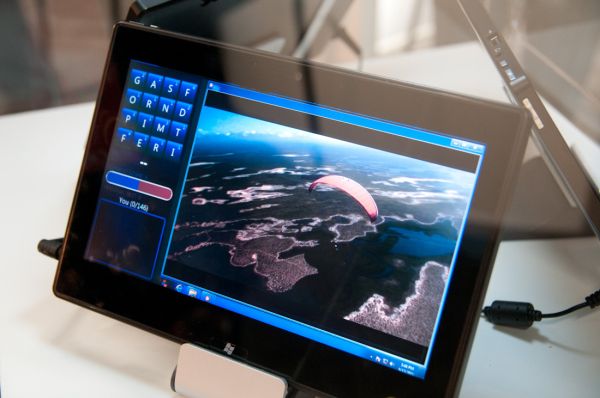 I also recorded a short video showing the TI Windows 8 tablet in action.

My next stop was Qualcomm, whose current development tablet runs on an MSM8660 SoC, which consists of two scorpion cores and Adreno 220 graphics. Qualcomm took the tablet out of the glass box for us and showed a quick demonstration of the start menu scrolling back and forth, and the IE10 mobile view working and scrolling around. 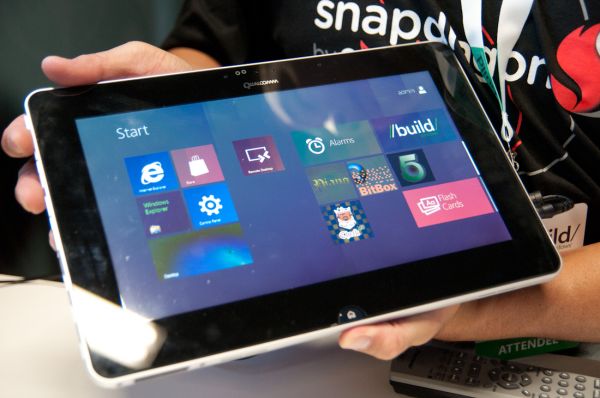 Unfortunately we weren't allowed to shoot video of the tablet while that demo was running, but we did grab some photos of the tablet without the glass box. Performance on the start menu looked to be above 30fps the whole time but not buttery smooth like the x86 tablets we've seen so far. 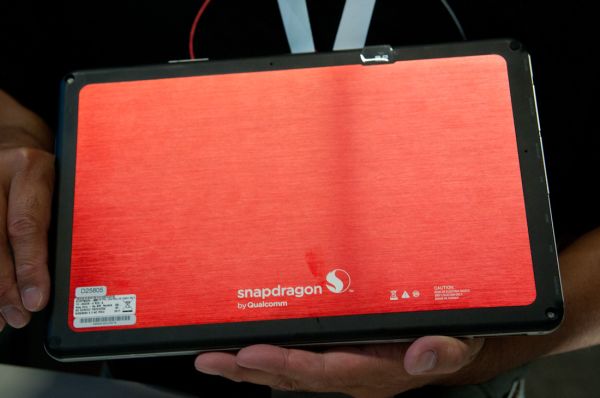 We've seen NVIDIA's Kal-El quad-core A9 based tablet a few times now, and found it out on the floor, also behind glass. Unlike the other vendors, NVIDIA hasn't said anything about going to market for Windows 8 with anything but Kal-El, and I don't see any reason why they should either. 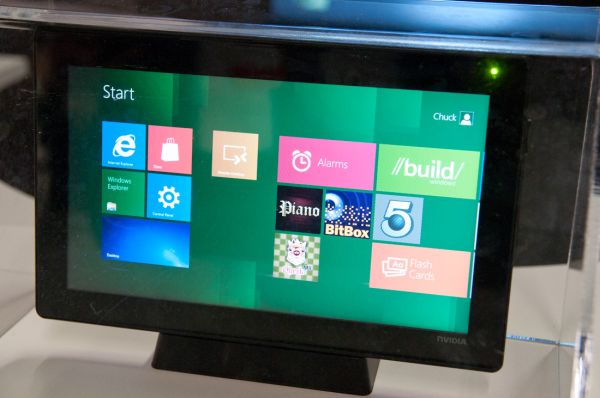 The Kal-El development tablet was seated in a nice looking dock with what looks like one USB 3.0 port and a full size HDMI port. 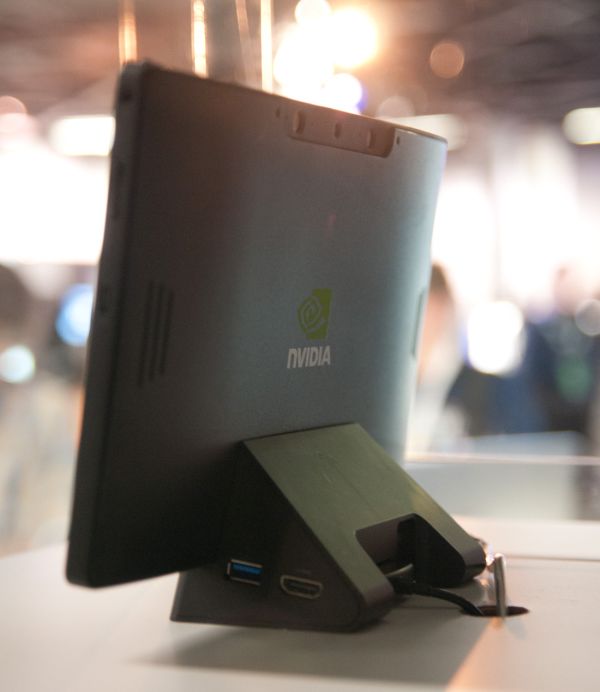 Switching over to the x86 camp, we have AMD, who showed us two tablets running on Brazos - the Acer Iconia Tab W500 and MSI WindPad 110W, which use a C-50 and Z-01 APU, respectively. Displays on these are 1280x800 and support capacitive touch just like you'd expect for Windows 8. 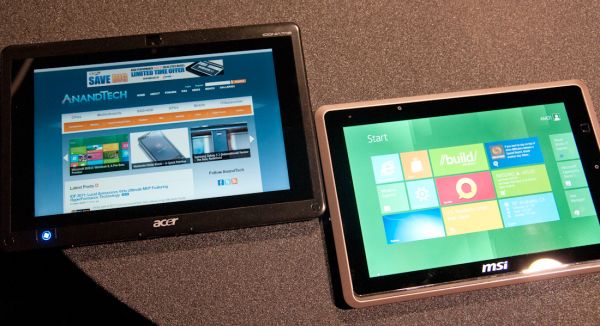 Both the MSI WindPad and Iconia Tab felt snappy and responsive running the same Windows 8 Developer Preview build that we've used on the Samsung developer hardware. Subjectively, the WindPad's capacitive panel was more responsive and less prone to errant touch recognition than the Iconia, though both were more than useable with Windows 8.

Last but not least is Intel's own development tablet, which is running an unnamed 32nm SoC. Intel was suspiciously silent about which particular SoC was inside this device, and you'll notice that it too is locked down in a plastic box, lumping it squarely in the next-gen SoC category for Microsoft. 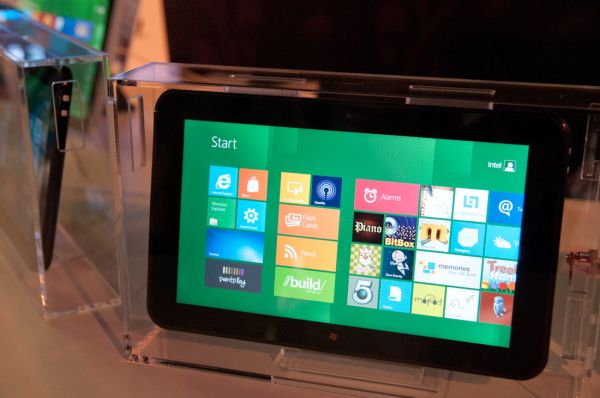