As part of a series of memory reviews, the next kit to enter our test beds is a limited edition enthusiast kit from GeIL.  Attached with what is called a ‘Frost White’ colored heatsink, this is a two module dual channel kit with a total of 16 GB running at DDR3-2400 MHz at 11-12-12-30 sub-timings that retails for ~$150.

GeIL is short for Golden Emperor International Limited, and in the world of memory, have been a main player in the consumer memory space since the late 1990s.  Today their product range consists of product names typically reserved for cars – Corsa, Leggera, and in this case Evo Veloce.  This could imply that GeIL want to advertise themselves at the forefront of memory production, and this is shown by their catalogue on Newegg showcasing mostly kits with 8GB modules.

The bulk of their memory sales comes from their Corsa range, featuring yellow colored heatsinks in a range of capacities (8GB modules to 8x8GB kits) and speeds (1333 to 2133 MHz). 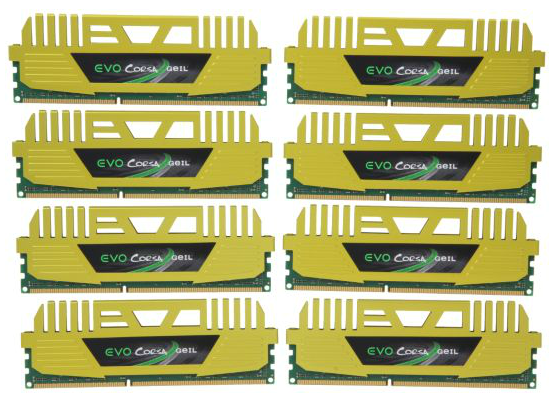 The Leggera range has similar speeds (up to 2400 MHz) and capacities (up to 4x8GB kits), but smaller blue heatsinks.

In contrast their Black Dragon range is heatsinkless, and comes in at only 1333 and 1600 MHz:

Today we are looking at one of GeIL’s Evo Veloce kits, kitted out in a ‘limited edition’ frost white.  The heatsinks are large, and with two 8 GB modules, there leaves room for upgrades in the future.

Back in the 'DDR3 on Ivy Bridge' overview, superlatives were not forthcoming with our DDR3-2400 C10 kit under scrutiny.  It offered little performance gain over the DDR3-2133 C9 kit, but asked for another $15 for the privelege to exceed in peak synthetic results only.  The GeIL Evo Veloce DDR3-2400 11-12-12 2x8GB kit then has a tough act to follow, coming in at $150 (more than the 2400 C10 kit) and having the timings reduced.  The upshot of all this is more capacity per module, leaving the door open for future upgrades, or maximising the memory in a dual module system.

When making the jump from 4GB modules to 8GB modules, compromises have to be made.  It could be construed that as everything is smaller, accesses should be quicker – but with double the density we can accrue additional latencies by reading larger rows in our memory module.  Whether that actually makes a difference in normal day to day tasks is another matter – everything to do with memory and memory speed borders on the debatable when it comes to actually affecting everyday use.

In terms of the competition, solely looking at 2x8 GB kits means on Newegg we have two competitors – the G.Skill TridentX 2400 C10 kit ($155) and the Corsair Dominator Platinum 2400 C10 kit ($255).  Going on solely XMP profiles, the G.Skill is the main competition, and being C10 is an advantage.  However, a set of 2x8 GB from the Crucial Ballistix range at 1866 C9 ($150) could also give the 2400 kit a run for the money.  Based on the calculation methods described in our original Ivy Bridge DDR3 overview, we having the following:

Whenever we look for a memory kit, having something extra to talk about always helps – aesthetics or overclocking usually works well.  While the Evo Veloce frost white modules look nice, they overclocked relatively well, hitting 1T with no issues, as well as overclocking to DDR3-2600 11-12-12 and DDR3-2400 10-11-11 at stock voltages. 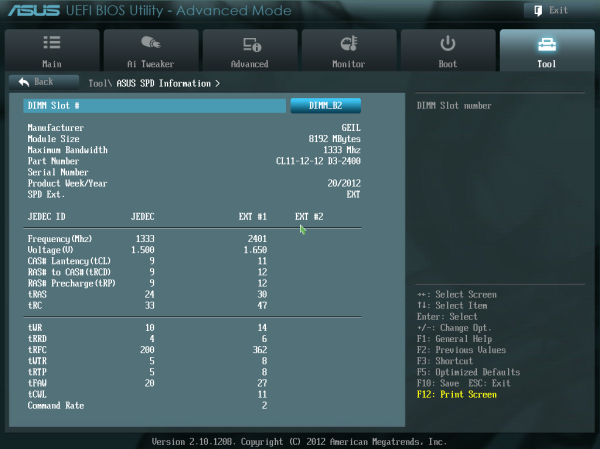 Usually the first thing we notice about the high end memory kits is the size of the heatsink.  With the Evo Veloce 2400 C11 kit, the heatsink extends 17 mm above the module itself providing some but not an optimal amount of surface area to dissipate heat… if that was the primary purpose.  Heatsinks on memory kits in the year 2012 tend to be on the kit for two reasons – the first is aesthetics, and as such if a user is producing a colored build then having memory the right color is a step in the right direction.  The other reason is one of secrecy – more often than not memory vendors no longer disclose what type of memory is underneath and where they buy it from.  We know that GeIL does its binning of the ICs, but they do not want other manufacturers to know which ICs are being used unless the manufacturer buys a kit and then rips it apart.  These heatsinks are sufficiently bonded to the ICs that attempts to remove them will damage the module.  Nevertheless, here are what the modules look like: 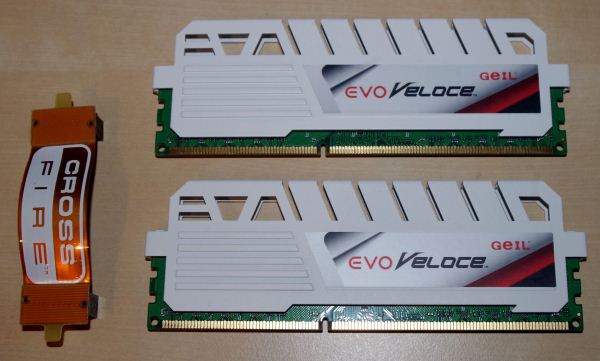 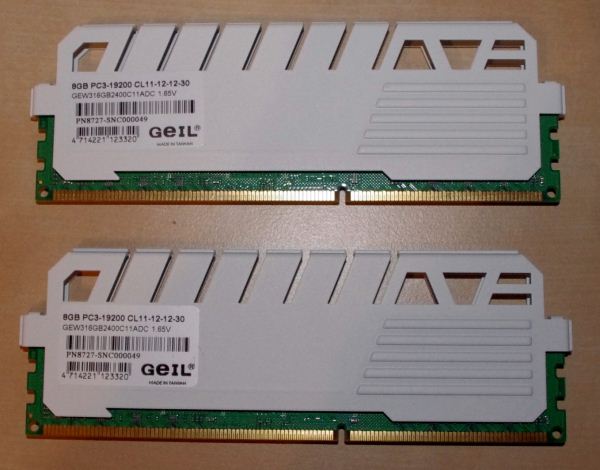 In comparison to other kits we have tested, we can see the extent of the heatsink.  In the case of the G.Skill Ares, which is a standard height memory module:

And against the tallest kits we have in, the G.Skill TridentX:

When placing such large modules into a motherboard, we must be aware of how large air coolers can affect the placement.  Typically a large air cooler will encroach on the nearest memory slot, and thus choosing the right memory can be important.  Following on from our previous memory testing, here is the attempt to get a GeIL kit into a Gigabyte H77N-WiFi which has a Copper TRUE mounted so the PCIe slot is not blocked: 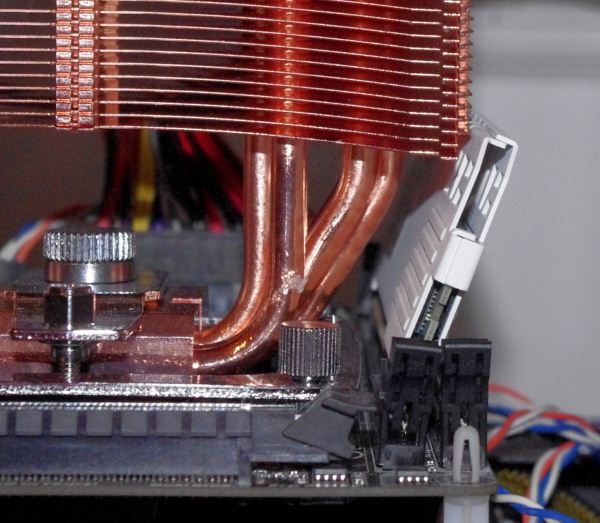 The result is not good – I could not even get the module in.  In contrast, here is the second slot: 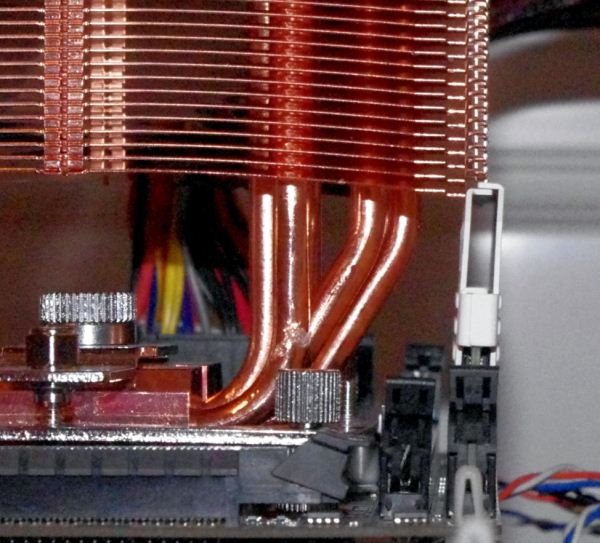 While the module is in the slot, we are right up against the cooler and there is some pressure there against the module forcing it at an angle.  Users with these modules may want to invest in some form of all-in-one liquid cooling as a result.  In our actual testing we use an ASUS P8Z77-V Premium and a stock Intel cooler, meaning spacing is not an issue.