Browsing through a manufacturer’s website can offer a startling view of the product line up.  Such was the case when I sprawled through Gigabyte’s range, only to find that they offer server line products, including dual processor motherboards.  These are typically sold in a B2B environment (to system builders and integrators) rather than to the public, but after a couple of emails they were happy to send over their GA-7PESH1 model and a couple of Xeon CPUs for testing.  Coming from a background where we used dual processor systems for some serious CPU Workstation throughput, it was interesting to see how the Sandy Bridge-E Xeons compared to consumer grade hardware for getting the job done. 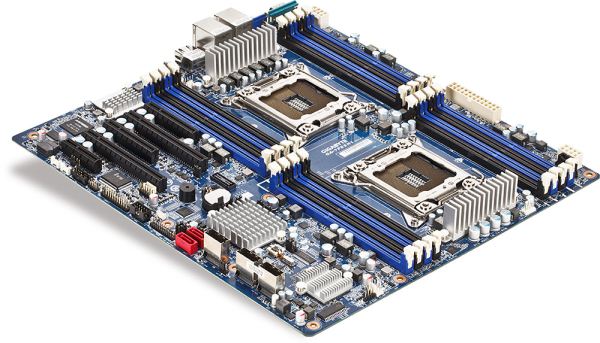 In my recent academic career as a computational chemist, we developed our own code to solve issues of diffusion and migration.  This started with implicit grid solvers – everyone in the research group (coming from chemistry backgrounds rather than computer science backgrounds), as part of their training, wrote their own grid and solver classes in C++ which would be the backbone of the results obtained in their doctorate degree.  Due to the idiosyncratic nature of coders and learning how to code, some of the students naturally wrote classes were easily multi-threaded at a high level, whereas some used a large amount of localized cache which made multithreading impractical.  Nevertheless, single threaded performance was a major part in being able to obtain the results of the simulations which could last from seconds to weeks.  As part of my role in the group, I introduced the chemists to OpenMP which sped up some of their simulations, but as a result caused the shift in writing this code towards the multithreaded.  I orchestrated the purchasing of dual processor (DP) Nehalem workstations from Dell (the preferred source of IT equipment for the academic institution (despite my openness to build in-house custom hardware) in order to speed up the newly multithreaded code (with ECC memory for safety), and then embarked on my own research which looked at off-the-shelf FEM solvers then explicit calculations to parallelize the code at a low level, which took me to GPUs, which resulted in nine first author research papers overall in those three years.

In a lot of the simulations written during that period by the multiple researchers, one element was consistent – trying to use as much processor power as possible.  When one of us needed more horsepower for a larger number of simulations, we used each other’s machines to get the job done quicker.  Thus when it came to purchasing those DP machines, I explored the SR-2 route and the possibility of self-building the machines, but this was quickly shot down by the IT department who preferred pre-built machines with a warranty.  In the end we purchased three dual E5520 systems, to give each machine 8 cores / 16 threads of processing power, as well as some ECC memory (thankfully the nature of the simulations required no more than a few megabytes each), to fit into the budget.  When I left that position, these machines were still going strong, with one colleague using all three to correlate the theoretical predictions with experimental results.

Since leaving that position and working for AnandTech, I still partake in exploring other avenues where my research could go into, albeit in my spare time without funding.  Thankfully moving to a single OCed Sandy Bridge-E processor let me keep the high level CPU code comparable to during the research group, even if I don’t have the ECC memory.  The GPU code is also faster, moving from a GTX480 during research to 580/680s now.  One of the benchmarks in my motherboard reviews is derived from one of my research papers – regular readers of our motherboard reviews will recognize the 3DPM benchmark from those reviews and in the review today, just to see how far computation has gone.  Being a chemist rather than a computer scientist, the code for this benchmark could be comparable to similar non-CompSci trained individuals – from a complexity point of view it is very basic, slightly optimized to perform faster calculations (FMA) but not the best it could be in terms of full blown SSE/SSE2/AVX extensions et al.

With the vast number of possible uses for high performance systems, it would be impossible for me to cover them all.  Johan de Gelas, our server reviewer, lives and breathes this type of technology, and hence his benchmark suite deals more with virtualization, VMs and database accessing.  As my perspective is usually from performance and utility, the review of this motherboard will be based around my history and perspective.  As I mentioned previously, this product is primarily B2B (business to business) rather than B2C (business to consumer), however from a home build standpoint, it offers an alternative to the two main Sandy Bridge-E based Xeon home-build workstation products in the market – the ASUS Z9PE-D8 WS and the EVGA SR-X.  Hopefully we will get these other products in as comparison points for you.