I knew server boards were large, but coming from the ATX and E-ATX standards, this thing is huge.  It measures 330mm x 305mm (13” x 12”) which correlates to the SSI EEB specification for server motherboards.  This is the size exact size of an official E-ATX motherboard (despite a small amount of loose definition), but to put the icing on the cake, the mounting holes for the motherboard are different to the normal ATX standards.  If we took a large case, like the Rosewill Blackhawk-Ultra, it supports ATX, SSI CEB, XL-ATX, E-ATX and HPTX, up to 13.6” x 15”, but not SSI EEB.  Thus drilling extra holes for standoffs may be required. 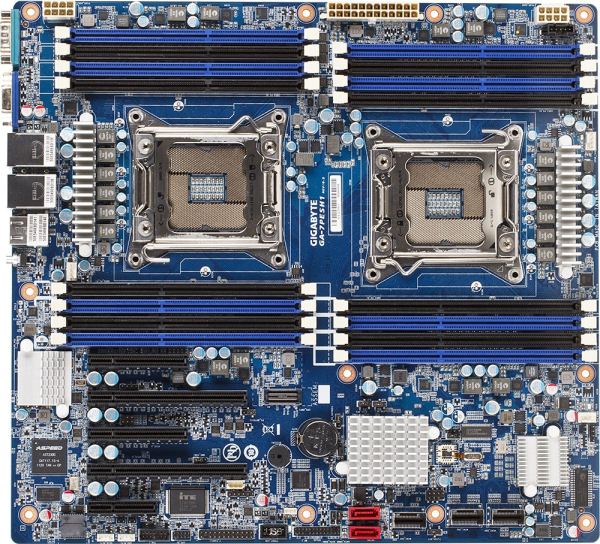 As with the majority of server boards, stability and longevity is a top priority.  This means no overclocking, and Gigabyte can safely place a six phase power delivery on each CPU – it also helps that all SB-E Xeons are multiplier locked and there is no word of unlocked CPUs being released any time soon.  As we look at the board, standards dictate that the CPU on the right is designated as the first CPU.  Each CPU has access to a single fan header, and specifications for coolers are fairly loose in both the x and the y directions, limited only by memory population and the max z-height of the case or chassis the board is being placed into.  As with all dual CPU motherboards, each CPU needs its own Power Connector, and we find them at the top of the board behind the memory slots and at opposite ends.  The placement of these power connectors is actually quite far away for a normal motherboard, but it seems that the priority of the placement is at the edge of the board.  In between the two CPU power connectors is a standard 24-pin ATX power connector. 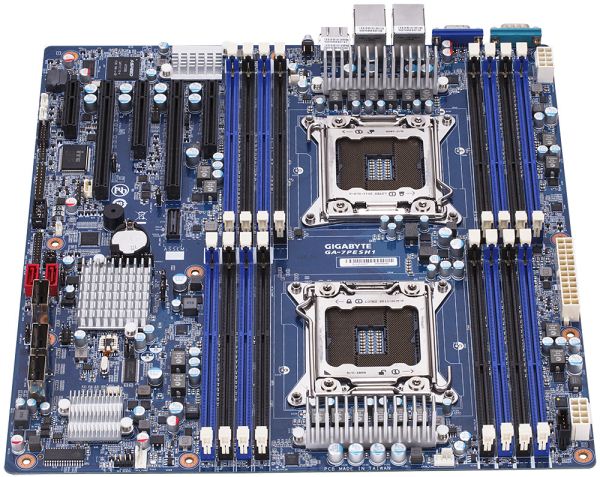 One of the main differences I note coming from a consumer motherboard orientation is the sheer number of available connectors and headers on such a server motherboard.  For example, the SATA ports have to be enabled by moving the jumpers the other side of the chipset.  The chipset heatsink is small and basic – there is no need for a large heatsink as the general placement for such a board would be in a server environment where noise is not particularly an issue if there are plenty of Delta fans to help airflow. 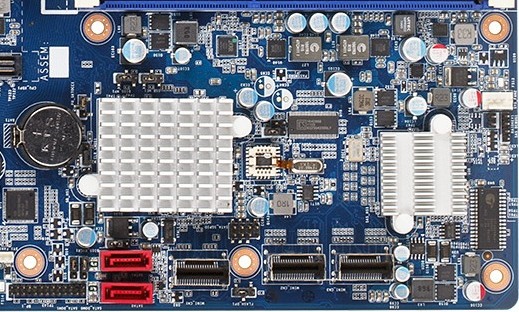 On the bottom right of the board we get a pair of SATA ports and three mini-SAS connections.  These are all perpendicular to the board, but are actually in the way of a second GPU being installed in a ‘normal’ motherboard way.  Users wishing to use the second PCIe x8 slot on board may look into PCIe risers to avoid this situation.  The heatsink on the right of this image covers up an LSI RAID chip, allowing the mSAS drives to be hardware RAIDed. 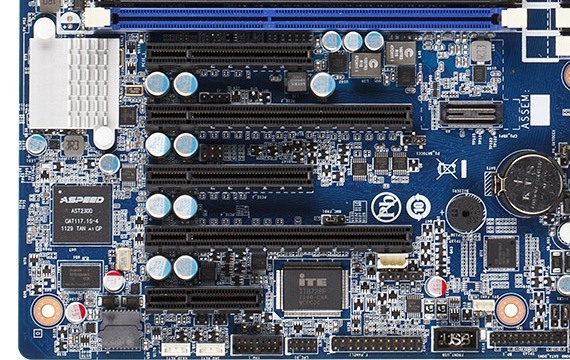 As per normal operation on a C602 DP board, the PCIe slots are taken from the PEG of one CPU.  On some other boards, it is possible to interweave all the PCIe lanes from both CPUs, but it becomes difficult when organizing communication between the GPUs on different CPUs.  From top to bottom we get an x8 (@x4), x16, x8 (@x4), x16 (@x8), x4(@x1).  It seems odd to offer these longer slots at lower speed ratings, but all of the slots are Gen 3.0 capable except the x4(@x1).  The lanes may have been held back to maintain data coherency.

To those unfamiliar with server boards, of note is the connector just to the right of center of the picture above.  This is the equivalent of the front panel connection on an ATX motherboard.  At almost double the width it has a lot more options, and where to put your cables is not printed on the PCB – like in the old days we get the manual out to see what is what.

On the far left we have an ASPEED AST2300 chip, which has multiple functions.  On one hand it is an onboard 2D graphics chip which powers the VGA port via its ARM926EJ (ARM9) core at 400 MHz.  For the other, it as an advanced PCIe graphics and remote management processor, supporting dual NICs, two COM ports, monitoring functions and embedded memory.  Further round this section gives us a removable BIOS chip, a COM header, diagnostic headers for internal functions, and a USB 2.0 header.

The rear IO is very bare compared to what we are normally used to.  From left to right is a serial port, the VGA port, two gigabit Ethernet NICs (Intel I350), four USB 2.0 ports, the KVM server management port, and an ID Switch button for unit identification.  There is no audio here, no power/reset buttons, and no two-digit debug LED.  It made for some rather entertaining/hair removing scenarios when things did not go smoothly during testing.

Without having a direct competitor to this board on hand there is little we can compare such a motherboard to.  In this level having server grade Intel NICs should be standard, and this board can take 8GB non-ECC memory sticks or 32GB ECC memory sticks, for a maximum of 512 GB.  If your matrix solvers are yearning for memory, then this motherboard can support it.