The P177SM is a new chassis for Clevo, a kind of ostentatious refresh on the traditionally staid lines of the previous generation notebook chassis. I never had a P170-based notebook, though I did spend time with both the P150EM and the W110ER, so I have a decent idea of what the general Clevo design language was. It was pretty simple, really—there wasn’t one. If you wanted some amount of generically chunky laptop, Clevo would serve it up to you in spades. Just pick a screen size and a thickness and that was it. The P150EM drove me mad, because it had such a bland and monotonous expanse of plastic—the W110 at least had interesting (or comical, depending on your viewpoint) proportions; the P150 was just boring and ugly. 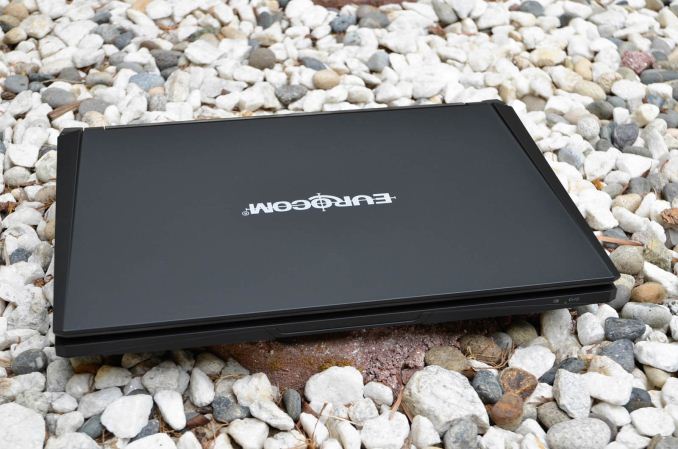 The P177SM (and also the 15” P157SM) brings with it crisper lines, with more defined and bold shapes that are certainly more interesting than the previous chassis. It’s busier as well, with many more design features—there’s a pair of vertical ridges near the right and left edges of the lid to introduce a bit of visual interest, and then a ton of bling after you open the notebook. The lid and most of the interior surfaces are a matte black plastic with a rubberized, soft touch finish, a material choice that has a reasonably upscale feel to it.

If this trend had carried throughout the entire interior, I’d be thrilled, because it’s a good look. There’s one exception though—the strip of plastic above the keyboard is a mirror finish panel with a ton of LEDs. The left and right side have the common status lights and the power button (with a blue LED logo), both of which make sense, but the majority of this panel is occupied by an audio level display, somewhat similar to the type of thing you used to see in stereo systems or aftermarket automotive head units. It lights up in blue LEDs, responds to every kind of sound that goes through the speakers (the number of LEDs that light up scales with the volume or intensity of the sound), and it cannot be disabled or turned off in any way unless you mute the audio output. It’s like having a hardware version of a Windows Media Player visualization running constantly. (Note that this is not on the smaller P157SM.)

For the first 5 minutes you have this laptop in your possession, it will be the coolest thing on earth (and it will always, without fail, appeal to your inner 10 year old). The day I received the X5, I sent our Eurocom contact an email essentially saying “wow this new chassis is cool”. I almost could have included “shiiiiiiiny”, but I thought that might be considered unprofessional. But that was before I had spent a whole lot of time with the system.

So it turns out, if you’re using your notebook in the dark, the brightness of the constantly active volume level meter, as well as the blue glowing touchpad, quickly go from “wow, that’s cool” to “wow, that’s incredibly annoying”. In well-lit scenarios, it isn’t much of a problem, though it’s still a bit odd to see the lights react to every sound the system makes. It’s just one of those features that makes me laugh, because it’s so random. But why, in the name of all that is holy, can the speaker graphic not be turned off? It's incredibly distracting in the dark, as is the backlit trackpad. I find this absolutely bewildering. This notebook lights up like a Christmas tree, except entirely blue including the keyboard backlight (and you can customize the colors if you want). Thus far, the only ways I've heard of to disable the audio lights are to uninstall the driver, though it seems unclear which driver that actually is, or have them physically disconnected, which Eurocom says they've done for customers. Or, I suppose there's an alternative route that involves duct taping over the lights to cover them up (no joke, when I was looking this issue up, another review actually suggested doing this.)

It’s worth noting that Clevo did release Haswell refreshes of their old chassis in the form of the P170SM and P150SM, which retain the much more understated and conservative, though no more attractive, designs of the previous generation notebooks. And while it may seem like I’m complaining quite a bit about the design, I do prefer the new P177SM to the older notebooks. It’s a notebook with character, and despite its flaws I think it’s an improvement on the P170 chassis. I feel like I’d prefer this with the P157SM, because I think the design language would suit itself to a smaller chassis quite well, or at least better than the 17.3” form factor. Jarred already reviewed the P157SM, though with a custom lid, so you can get his take on the industrial design and overall feel.

It’s interesting though, the Clevo doesn’t hide its bulk well. I went to the detailed specifications list expecting to find something closer to 2.4” as the maximum thickness, not 1.84”. The minimum thickness of 1” is indicative of the aggressive sloping, but it’s still not that thick. The P177SM felt as bulky to me as the 2.15” M18x R2 that I had earlier in the year or the 2.45” ASUS G74SX from last year. Perhaps my perspective has warped a bit after surrounding myself with ultrabooks or otherwise ultrathin notebooks over the last couple of years, but I still found it shocking that the Clevo was sub-2” thick.

Clevo’s design team has never done the most refined work out there; their conception of the term “industrial design” has always seemed to be far more industrial than it was design. The entire system still looks pretty clunky, with really blocky shapes all the way around. It’s anti-sleek. And beyond the ridiculousness that is the mirror finish interior piece and associated LED assembly, some of the more minor design details are not necessarily to my liking—the prominent gap between the LCD and the chassis when the notebook is opened, the large seams between the various plastic panels, the weirdly angular hinge design, the vents being kind of haphazardly placed on the back, and I could go on. The latter is actually a huge pet peeve of mine from the P150 as well, which was even worse with the randomly angled vents on the back of the chassis—that one design element annoyed me to absolutely no end with that system when I had it last year.

But I guess where I’m going with this is to say that Clevo has never paid the most attention to detail with their designs. I don’t mind so much that their laptops are bulky, but that they almost feel like they were designed by people that just didn’t care how their systems looked or even put in very much thought to the aspects of the design that weren’t strictly functional. Alienware has shown us time and time again (and Dell with their previous 17” XPS line) that it’s possible to create a very bulky 17” notebook chassis with an attractive design. If you pay enough attention to detail, really focus on the little design details, you can make a great looking computer even if it’s roughly the size of a barn door and weighs 12 pounds (cough, M18x). And admittedly, the Clevo machines are cheaper than the corresponding Alienwares and far more customizable, but they aren’t inexpensive by any means, and if I had spent $3000 or more on one of these, I don’t think I’d be too pleased by some of the more obvious design oversights and missteps here. 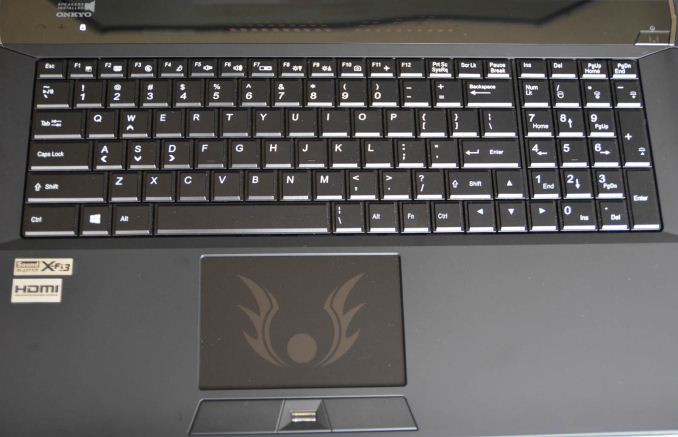 The entire interior of the notebook feels well built, the rubber painted plastic has a high quality, soft touch feel. The keyboard is quite good, well spaced (as one might expect on a 17.3” system) and devoid of much flex (as one might expect on a 1.84” thick system). The layout was decent, as well, though I’m really struggling to understand why some companies are moving the Fn key to the right side of the spacebar. It’s the wrong side of the keyboard, guys. In day to day use, it just feels unnatural. Other than that ergonomic question mark, the typing experience is excellent.

The touchpad is a bit less stellar, with Sentelic hardware that is pretty significant steps below Synaptics and ELAN. It’s far better than the last Sentelic touchpad I had to deal with in the first-generation Vizio CT15. That’s definitely a good sign, but not really saying much considering that Vizio had the single worst touchpad I’ve seen in the last half-decade of reviewing notebooks (second worst: the Dell Inspiron 11z, which also had a Sentelic touchpad). I’m glad that Sentelic has moved their pads into a range I’d consider usable day to day, though with a notebook like this, I suppose one could expect to have an external mouse plugged in with relative frequency.