I’ve said for a while now that arguably the most important aspects of any laptop are things that are more subjective rather than objective. By that, I mean that things like the keyboard, touchpad, build quality, and screen quality often end up being more important than raw performance. Which isn’t to say that performance doesn’t matter, but you could have the fastest laptop in the world and if the keyboard, touchpad, and build quality are terrible the performance it offers may not be enough to overcome those flaws. Conversely, a laptop that looks and feels great that perhaps underperforms can often be “good enough” for a lot of users, especially if the price is right.

The Acer Chromebook 13 ends up doing exceptionally well in one area that’s near and dear to my heart: the keyboard. This is a bit ironic as Acer has had quite a few poor keyboards in previous laptops. The layout and general appearance of the Chromebook 13 keyboard isn’t all that different from the C720, but it has very different feel, decent key travel, and the keys don’t have any play (looseness), which was something I noticed with the C720. It’s not that the C720 keyboard was horrible (or exceptional), but the new Chromebook 13 has a great feeling keyboard, especially for a laptop that costs under $300. 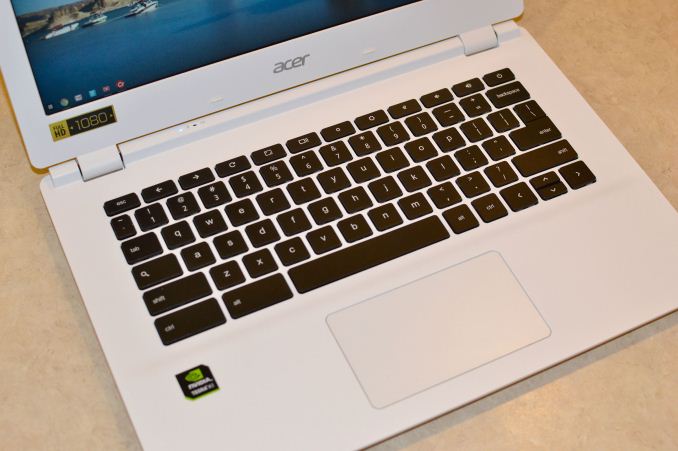 The touchpad ends up being more of a middle of the road solution – it works okay, but here performance does become a factor, and particularly on some of the more complex websites the touchpad gestures can end up being very laggy. It’s not a bad touchpad, and really the problem seems to be the lack of processor performance, but the net result is that there are times where you feel like the touchpad isn’t doing its job properly.

The screen is another area where there are good and bad aspects. The good news is the 1080p resolution being available – surfing and doing other work on a 1366x768 display feels very limiting, and 1080p ends up being much better. The display is also anti-glare and can get reasonably bright. The problem is that the anti-glare coating is very visible, resulting in a lot of “sparkle”, and the contrast and viewing angles from this TN panel are quite bad. Those looking for a great display in a Chromebook really only have one option right now, unfortunately: the Toshiba Chromebook 2 has a 13.3” IPS panel that’s quite good. Everything else in Chromebook land suffers from the race to the bottom. (Note that Acer’s upcoming Chromebook 15 will also have a 1080p IPS option; I’ve seen it in person at CES, and I’m very much looking forward to reviewing one.)

Wrapping up with build quality, Acer’s Chromebook 13 is actually pretty nice. I personally think the use of white instead of some other color is great and I’d like to see more laptops go that route (though of course dirt and discoloration is a potential long-term problem), but it’s not just the color. Being fanless means there’s no noise, and the chassis can be made thinner and lighter without really sacrificing other elements. It’s still a plastic shell and it’s not going to rival a unibody aluminum chassis, but it doesn’t feel too chintzy either. Overall it’s a decent feeling laptop and should hold up well as long as you don’t pound on it.

You can also access the internals if you’re bored, which I did, but there’s not really anything to do inside a Chromebook like this. There are no memory slots or hard drives – mSATA or otherwise – so you basically get what you purchase and there’s nothing to upgrade. If you need more storage, you can slot in an SD card, but that’s about it. I do have to admit that the size of the battery was rather surprising when I opened the chassis – I expected something like a 30Wh battery, but Acer has a 48Wh 4-cell battery in here. That’s basically the same size as what they used in the 11.6-inch C720 (45Wh), but 48Wh to power a Tegra K1 is a big part of why Acer can claim 11 hours of battery life (or 13 hours with the 1366x768 display).

Subjectively then, there’s plenty to like with Acer’s Chromebook 13, but it’s by no means perfect. What is a bit surprising is that the base price ends up being nearly $100 more (MSRP) compared to the previous generation C720, and that’s a bit difficult for me to justify. It looks and feels nicer, but performance as we’ll see in a moment is a step backwards and the various upgrades really shouldn’t have increased the price that much. The good news is pricing has dropped substantially now, so it's only a $30-$50 difference compared to the C720, so it’s worth checking out, but even if you love the idea of a Chromebook I’m not convinced this is the best solution. Give me a better display (IPS or similar) at the same price point and I’d be sold; give me the internals of the C720 with this chassis and I’d be happier. As it stands, I have mixed feelings.