Armed with both a fully unlocked VBIOS and the 344.75 NVIDIA drivers, it’s time to investigate overclocking. That means we need some overclocking software, so we checked out MSI Afterburner 4.1.0 and NVIDIA Inspector 1.9.7.3. Both offer the ability to change GPU core/RAM clocks, but NVIDIA Inspector in this case allowed us to change the GPU voltage as well, which made it the winner for our testing. 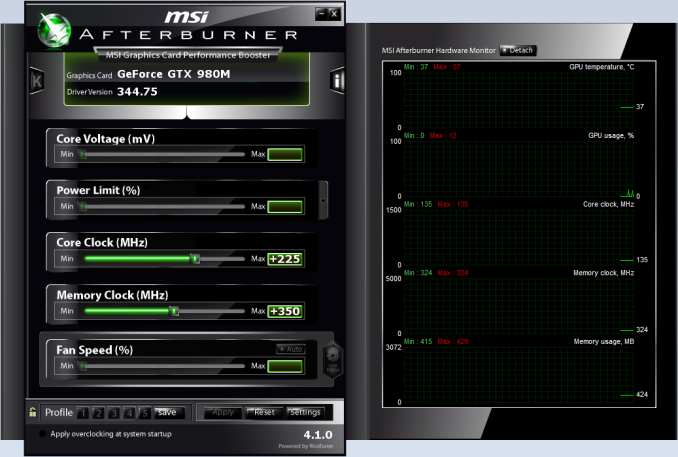 Both pieces of software work with offsets, so you’re not directly changing the clock speeds but rather increasing (or potentially decreasing) the starting point. The GTX 980M by default runs at 1038MHz plus whatever Boost clock the hardware can “safely” reach; the GDDR5 by default runs at ~5000MHz. At idle, the 980M has a 135MHz core clock and 650MHz GDDR5 clock, and it’s important to note that overclocking did not change these idle clocks.

It’s worth noting that besides shipping with a Prema modded BIOS/VBIOS, Eurocom also uses IC Diamond 7 Carat thermal paste for their P5 Pro (P750ZM) notebook. This comes installed from Eurocom and you don’t (directly) pay extra for the improved cooling capability. If you purchase a P750ZM from a different vendor, you will likely want to either pay the system integrator to use a better thermal paste or else plan on doing the upgrade on your own. It might be possible to improve the cooling by lapping the heatsinks or using a different thermal paste, but we didn’t investigate this. 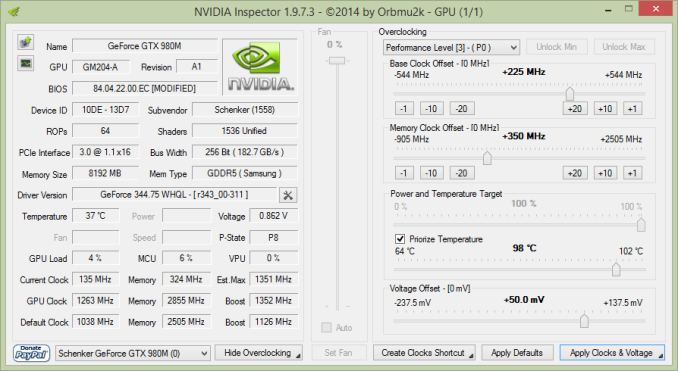 As far as our test software, we selected seven games, with several coming from our regular mobile gaming benchmarks along with a few recent releases. Instead of going with the native 4K (3840x2160) resolution of the laptop panel, we opted for a more moderate resolution of 2560x1440. This allows us to ratchet up the quality settings more than we’d be able to at 4K, which means the CPU has to work harder and the GPU should still have plenty of work going on as well.

Finally, we also conducted stress testing where we attempted to “max out” the total system power draw. To accomplish this we ran the second pass of the x264 HD 5.0 test on four threads (cores 4-7) with Tomb Raider running at 2560x1440 Ultimate settings on four threads (cores 0-3). We found that using more cores/threads for x264 ended up reducing the total system load as the game would end up running slower due to fighting for resources. Note that certain synthetic tests (e.g. FurMark) will throttle the clock speeds automatically, which is why we opted for real-world applications.