A number of factors about the A8-7670K processor suggest that this is "another release of the same sort of stuff," albeit with increased frequencies. Nevertheless, we put the processor through our regular tests, to see what would happen. Our bench suite this time had one omission and one addition. For whatever reason, Linux Bench refused to run, with Ubuntu 14.04 throwing a hissy fit and not willing to start. I’m not sure if this was a BIOS issue or something more fundamental with the software stack, but it was odd. The addition, as the title of the review alluded to, is a Rocket League benchmark. At this time, we haven’t run it on many systems, but the A8-7670K is the sort of APU that enables games like Rocket League. Rocket League is a good contender for our 2016 CPU/APU benchmark suite on the integrated graphics side of things, and this serves as a good tester in the wild.

All of our regular benchmark results can also be found in our benchmark engine, Bench. Rocket League will be added in the future with the 2016 updates.

Power consumption was tested on the system while in a single GTX 770 configuration with a wall meter connected to the OCZ 1250W power supply. This power supply is Gold rated, and as I am in the U.K. on a 230-240 V supply, that leads to ~75% efficiency at greater than 50W, and 90%+ efficiency at 250W, suitable for both idle and multi-GPU loading. This method of power reading allows us to compare the power management of the UEFI and the board to supply components with power under load, and includes typical PSU losses due to efficiency. 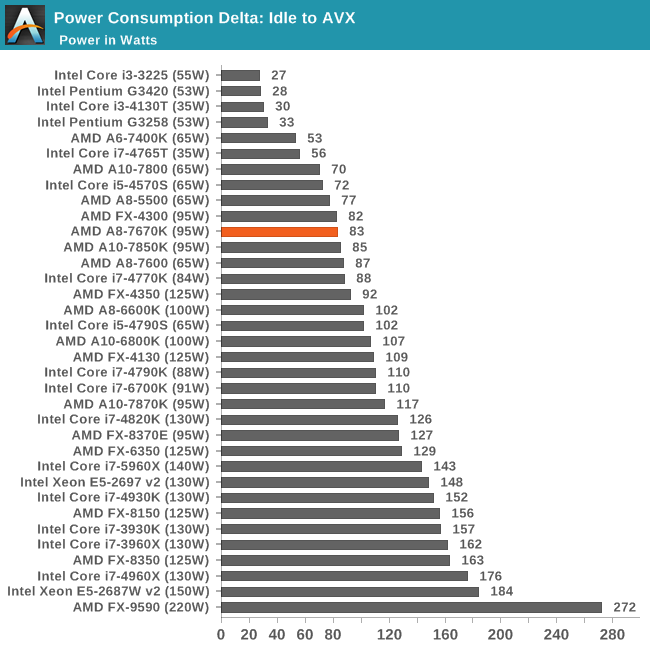 The TDP for the A8-7670K is up at 95W, similar to many other AMD processors. However, at load, ours drew only an additional 83W, giving some headroom.

For this review, we even tried our hand at overclocking on the MSI A88X-G45 Gaming motherboard and managed to get 4.6 GHz stable.

Our standard overclocking methodology is as follows. We select the automatic overclock options and test for stability with POV-Ray and OCCT to simulate high-end workloads. These stability tests aim to catch any immediate causes for memory or CPU errors.

For manual overclocks, based on the information gathered from previous testing, we start off at a nominal voltage and CPU multiplier, and the multiplier is increased until the stability tests are failed. The CPU voltage is increased gradually until the stability tests are passed, and the process is repeated until the motherboard reduces the multiplier automatically (due to safety protocol) or the CPU temperature reaches a stupidly high level (100º C+, or 212º F). Our test bed is not in a case, which should push overclocks higher with fresher (cooler) air.

MSI’s motherboard doesn’t allow fixed voltages to be set but prefers to rely on an offset system only. There is a problem here that we are also fighting a DVFS implementation, which will automatically raise the voltage when an overclock is applied, with an end result of stacking the overclock voltage offset on top of the DVFS voltage boost. On our cooling system, the processor passed quite easily up to 4.6 GHz without much issue, but 4.7 GHz produced an instant blue screen when a rendering workload was applied. Hitting 4.6 GHz on a midrange AMD processor is quite good, indicating our sample is some nice silicon, but your mileage might vary.