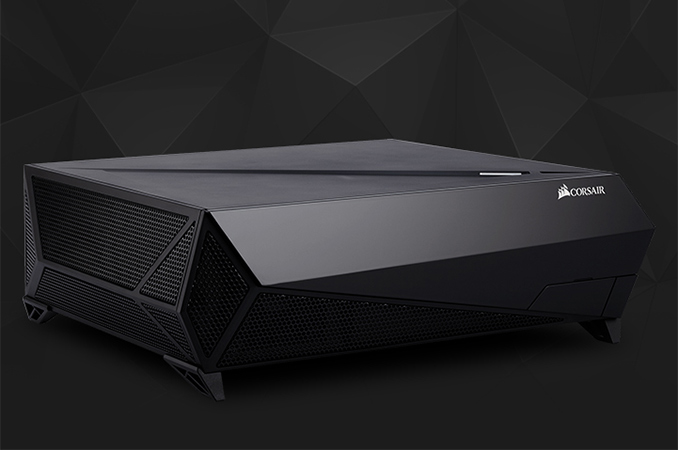 Corsair introduced its new Bulldog 2.0 small form-factor HTPC console-like barebones kit at CES. The new Bulldog 2.0 received a new motherboard based on the Intel Z270 PCH with improved features, as well as a new CPU liquid cooling system that is said to be quieter compared to the predecessor. At the same time, the kit retained its visual design and a relatively moderate price point.

Corsair’s Bulldog case blends enthusiast-class performance and features with a living room aesthetics, which is a rather rare combination. The Bulldog chassis can accommodate a mini-ITX motherboard, a full-height graphics card (which is not longer than 300 mm and is not thicker than 90 mm), two liquid cooling systems, a 3.5” HDD, up to three 2.5” storage devices, multiple fans as well as an SFX power supply. At CES Corsair demonstrated its new Bulldog 2.0 barebones kit featuring MSI’s Z270I Gaming Pro Carbon AC motherboard, its own new Hydro H6 SF low-profile cooler as well as the SF600 PSU.

Since the Bulldog 2.0 uses almost the same chassis as the initial product, the key differentiators of the new barebones kit is the mainboard and the LCS. The latter is not yet available separately and the company even has not published its specs. The only thing that Corsair says about the H6 SF is that it is quiet even when it has to cool down an overclocked CPU, which is not really a detailed description. As for the Z270I Gaming Pro Carbon AC motherboard, it comes with an LGA1151 socket supporting both Kaby Lake-S and Skylake-S processors, two DIMM slots for up to 32 GB of DDR4 memory, a PCIe 3.0 x4/NVMe M.2-2280 slot for SSDs and a PCIe x16 slot for graphics cards. The motherboard is equipped with the new ASMedia ASM2142 controller (uses PCIe 3.0 x2 interface and thus provides up to 16 Gbps of bandwidth to two USB 3.1 Gen 2 ports) powering USB 3.1 Gen 2 Type-A/C headers, Intel’s dual-band Wireless-AC 8265 module (Wi-Fi 802.11ac + BT 4.2), Intel’s I219-V Gigabit Ethernet controller, a 7.1-channel Realtek ALC1220-based audio sub-system, SATA connectors and so on.

The motherboard looks to be more advanced than the one installed into the first-gen Bulldog as it is based on the latest Intel Z270 PCH, supports Optane Memory caching, a newer audio codec and an improved USB 3.1 (10 Gbps) controller. If the H6 SF LCS is really quieter than the predecessor, then the Bulldog 2.0 has a nice set of improvements over the first version. 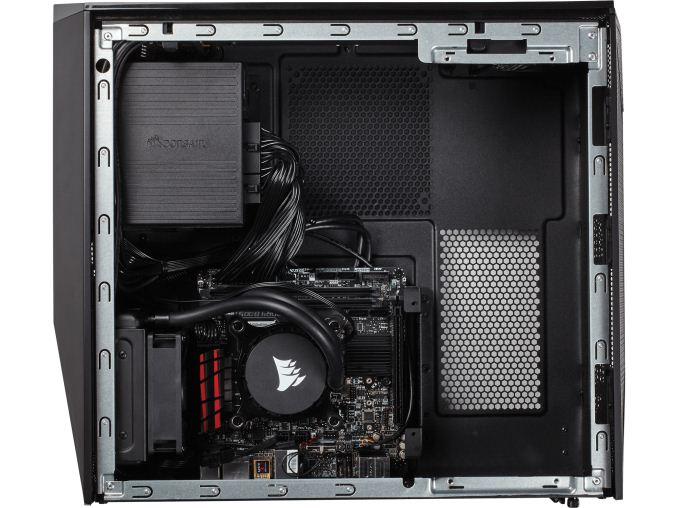 The refined Corsair Bulldog 2.0 barebones kit will be available shortly for $399.99, the price point of the first-gen product. In addition, select PC makers and retailers will offer their PCs based on the Bulldog 2.0 that will cost according to their specifications: The higher-end models will use MSI’s liquid-cooled Hydro GFX GTX 1080 graphics cards along with Intel's K-processors, whereas more affordable builds will use something less extreme for an SFF system.