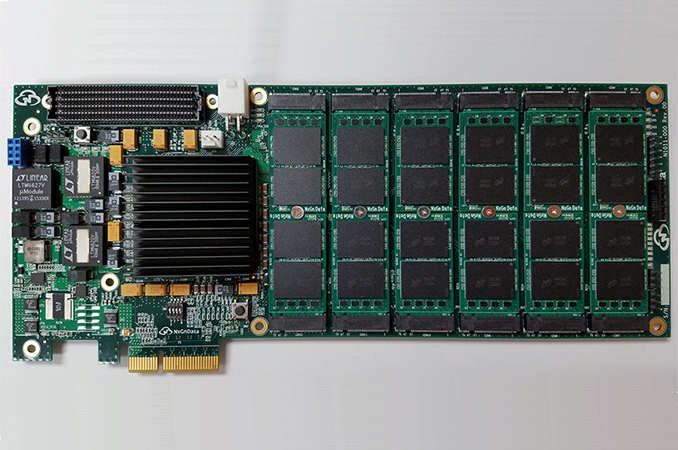 NGD Systems this week announced its first SSD that also happens to be one of the highest capacity drives in the industry. The NGD Catalina uses a proprietary controller as well as up to 24 TB of Micron’s 3D TLC NAND memory and apart from capacity, its key feature is a relatively low power consumption.

Before we jump to the Catalina SSD, it makes sense to talk about NGD Systems (formerly known as NxGn Data) itself. The company was founded in June 2013 by a group of people who previously developed SSDs at companies like Western Digital, STEC and Memtech, with the corporate aim to develop drives for enterprise and hyperscale applications. Back in 2014, the company disclosed that its primary areas of interest were LDPC, advanced signal processing, software-defined media channel architecture and in-storage computation capability. NGD has been developing various proprietary technologies behind the Catalina since its inception and the SSD is a culmination of their work.

The NGD Catalina is a large add-in-card with a PCIe 3.0 x4 interface that also supports a Mezzanine connector. Rather than have the NAND on the main card, instead the card uses multiple M.2 modules with Micron’s 3D TLC NAND. The 24 TB version of Catalina carries 12 of such modules, whereas lower capacity SKUs will use a fewer modules. According to NGD, the Catalina consumes only 0.65 W of power per Terabyte (which means ~15.6 W for the 24 TB SSD), but the card still has a 4-pin auxiliary power connector.

Keeping in mind that the SSD has a PCIe 3.0 x4 interface, the peak read/write performance of the drive is limited to 3.9 GB/s. Meanwhile, NGD does not disclose official performance or endurance numbers for the Catalina SSD, but only says that the drive is optimized for read-intensive applications.

The NGD Catalina is based on the company’s proprietary ASIC controller which performs LDPC ECC and enables NGD’s patented Elastic FTL (Flash Translation Layer) algorithm, which we believe is for software defined media channels and is claimed said to lower power consumption of SSDs. We do not know anything about the architecture of the controller used by the Catalina, but back in 2014 the company said (according to EETimes) that its controller used ARM's Cortex-A9 cores (UPDATE3/5: the new controller uses the A53) that ran a micro-OS based on Linux to perform the usual tasks as well as in-storage (In-Situ) computing.

In-Situ is One of the technologies that NGD has been evangelizing since its establishment. In-storage processing moves a compute function closer to the data and allows executing an app on the drive through the Cortex A9s. This concept makes particular sense for various applications that have to search through and analyze large amounts of data (e.g., Big Data) because it eliminates in-device network bottlenecks (there is no need to transfer all the data to the CPU if basic search functions can be done on the drive). The In-Situ paradigm does not abolish host CPUs or operating systems that make requests and manage operations, but it reduces loads on data buses, network, and CPUs to improve performance and reduce power consumption of data centers. It is not stated if the NGD Catalina supports In-Situ though.

The NGD Catalina is being qualified at various OEMs and is available at various capacity points to interested parties. The company does not talk about exact pricing of its drives because a lot depends on actual capacity points as well as volumes of the SSDs acquired.