The GIGABYTE GB-BKi7HA-7500 is an actively cooled PC. The fan curves in the BIOS are also quite aggressive, making it a bit more noisy compared to other Kaby Lake-U PCs that we have evaluated before. As such, it is not a perfect HTPC. However, it does support 4K Netflix (like the ASRock Beebox-S 7200U). Some readers had also requested madVR performance testing with the Intel HD Graphics 620. Given these aspects, we thought it would be worthwhile to look at the HTPC aspects of the PC.

Starting with Haswell, Intel, AMD and NVIDIA have been on par with respect to display refresh rate accuracy. The most important refresh rate for videophiles is obviously 23.976 Hz (the 23 Hz setting). As expected, the GIGABYTE GB-BKi7HA-7500 has no trouble with refreshing the display appropriately in this setting. 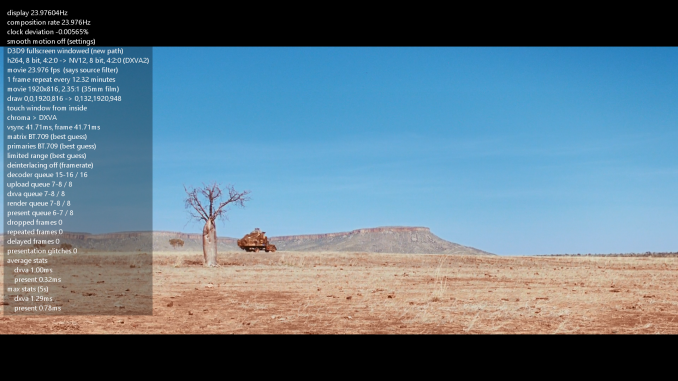 The gallery below presents some of the other refresh rates that we tested out. The first statistic in madVR's OSD indicates the display refresh rate.

Evaluation of OTT playback efficiency was done by playing back our standard YouTube test stream and five minutes from our standard Netflix test title. Using HTML5, the YouTube stream plays back a 1080p encoding. Since YouTube now defaults to HTML5 for video playback, we have stopped evaluating Adobe Flash acceleration. Note that only NVIDIA exposes GPU and VPU loads separately. Both Intel and AMD bundle the decoder load along with the GPU load. The following two graphs show the power consumption at the wall for playback of the HTML5 stream in Mozilla Firefox (v 51.0.1). The graphs below show that our BRIX configuration is not a particularly power-efficient one for OTT streaming. It is obviously possible to lower these numbers by using a SATA SSD and a single SODIMM without any performance or feature set loss for OTT streaming workloads. 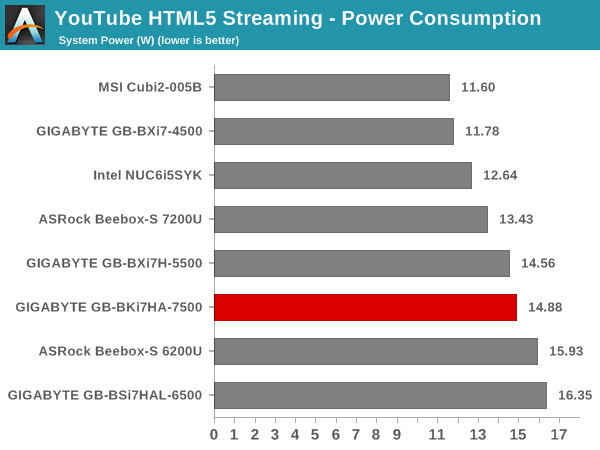 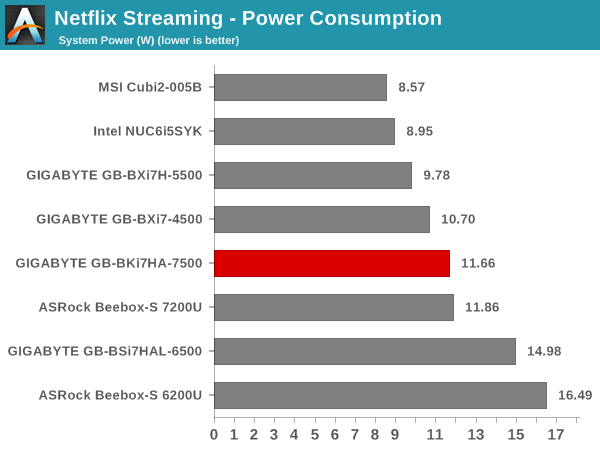 We have already seen in our previous KBL-U UCFF PC reviews that the Intel HD Graphics 620 has absolutely no trouble with video playback using either Kodi or MPC-HC's default EVR-CP renderer. In order to present a different perspective, we decided to evaluate a madVR configuration as well as the latest Kodi release (Kodi 17.1 RC) on the GB-BKi7HA-7500.

Under madVR (0.91.7), we used the DXVA2 scaling logic wherever applicable (as it is known to be the best choice for Intel IGPs). For scaling situations where the dedicated scaler inside the GPU couldn't be used, we chose Jinc. The rest of the madVR settings were left at default. MPC-HC 1.7.11 was used for playback, and LAV Filters 0.69 was configured in the native DXVA2 mode for the decoder.

In our earlier reviews, we focused on presenting the GPU loading and power consumption at the wall in a table (with problematic streams in bold). Starting with the Broadwell NUC review, we decided to represent the GPU load and power consumption in a graph with dual Y-axes. Elevent different test streams of 90 seconds each were played back with a gap of 30 seconds between each of them. The characteristics of each stream are annotated at the bottom of the graph. Note that the GPU usage is graphed in red and needs to be considered against the left axis, while the at-wall power consumption is graphed in blue and needs to be considered against the right axis. The GPU power consumption as reported by the processor is also recorded in green.

Frame drops are evident whenever the GPU load consistently stays above the 85 - 90% mark. We find that the GB-BKi7HA-7500 can't handle scenarios where upscaling is required (we use a 1080p display for this evaluation). However, 1080i/p and 4K content were decoded and rendered without any issues. 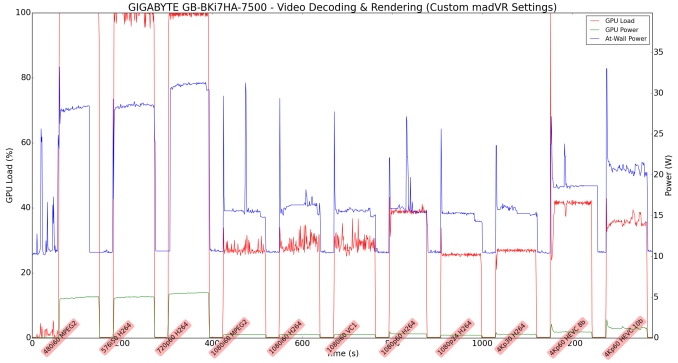 We also performed a similar evaluation with Kodi 17.1RC in its default configuration. Kodi has absolutely no issues in playing back our test streams. 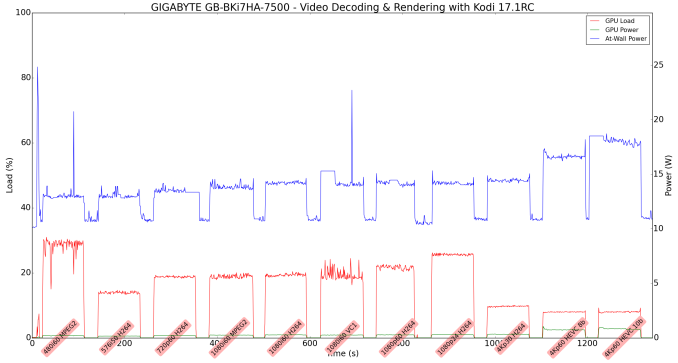 Kaby Lake-U has one of the most comprehensive codec supports in the market after Intel decided to add HEVC 8b and 10b full hardware decode. In fact, there is also support for 10-bit VP9 in the GPU. It is a pity that the display engine still doesn't support HDMI 2.0 natively. However, GIGABYTE has integrated a LSPCon and ensured that the lack of native support is not a problem for the GB-BKi7HA-7500.