The unit ships with only a few bundled features, unlike the ASUS units, which tend to ship with lots of extra recordable media and reading material. Notice that the drive is about an inch shallower than most CDR drives. MSI calls this feature MiniForm, a user-friendly feature for easier installation. While that might be true, more importantly, when producing thousands of units, every little bit helps. Most likely, MSI saves an incredible amount of money just by making the drive a little bit smaller. Several of Lite-On’s newer drives are also manufactured red in similar fashion. 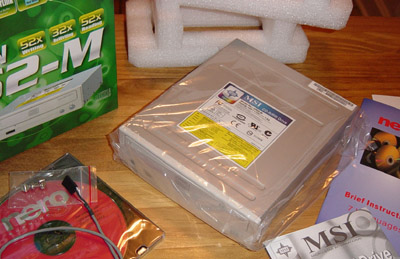 
Our drive came with Nero 5.5, an audio cable, screws, the drive itself and installation manuals for Nero and the drive. The majority of the written documentation is actually for Nero rather than the drive installation. MSI includes a fair amount of installation documentation too, but it could be better. What upset us the most was the lack of documentation on the web. In fact, the MSI PDF manual for the CR52-M crashed our newest version of Adobe Acrobat (the error explained something about not having Korean Text support). 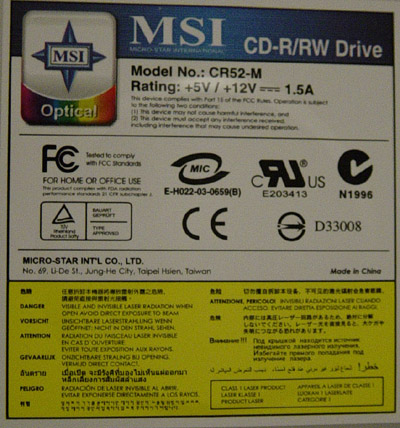 
The front of the CR52-M resembles basically any other MSI drive. It has two oversized LED buttons, along with headphone jack and volume control. Unlike 24X CDRW drives, the CR52-M sports a new logo. Some of you might remember that 24X CDRW drives tend to say “High Speed” written along the side. OptoRite, Lite-On/ASUS and MSI’s newest 36X CDRW drives replace this with the words “Ultra Speed”. Perhaps when manufacturers obtain 42X rewrite on a CDRW, they will change it to “Ludicrous Speed” or “Ridiculous Speed”?

Below is a quick overview of specifications on the drive:


Technically, the drive is virtually identical to the Lite-On LTR-52327S. The OptoRite CW5201 is also very similar, but the MSI drive is slightly more capable with burning more modes like Mount Rainer. All three drives support 99min CDRs, but the Lite-On LTR-52327S is the only drive capable of variable packet writing. Variable packet writing is a feature most people probably do not need, but if it is something you do need, you will not find it on the MSI CR52-M.

Our original drive came with firmware version 1.52, which we promptly updated to 1.80. Unfortunately, MSI’s BIOS update utilities are fairly dated and really leave something to be desired.