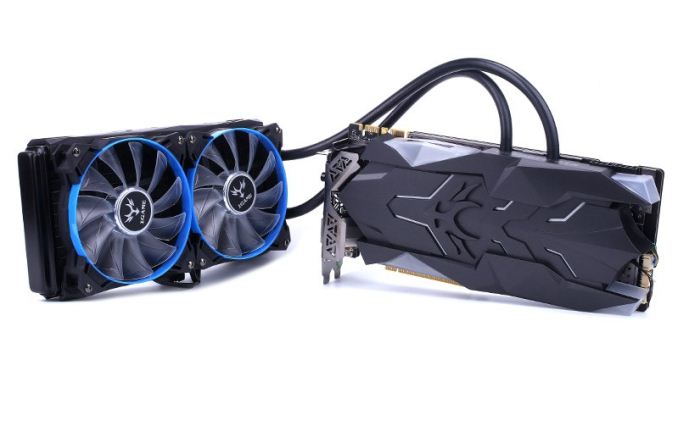 The past few months have been full of announcements and releases for all-in-one liquid cooled graphics cards, and now Colorful is joining the fray with their iGame GeForce GTX 1080 Ti Neptune W. First teased at Computex 2017, the Neptune W comes equipped with an all-in-one closed loop cooling solution, featuring a novel 240mm radiator.

While Colorful is a China-based vendor, at Computex 2017 the company also disclosed plans to launch their iGame series cards worldwide, starting in Southeast Asia and Korea; Colorful already has branches in Germany, South Korea, and Vietnam. This follows previous information hinting at future market expansion with Colorful’s iGame GTX 1080 Ti Vulcan X OC. In the meantime, the Neptune W product page is only listed on their Chinese site.

As the flagship entry in the iGame Neptune series, the 1080 Ti Neptune W is outfitted with all the LED trappings we’ve come to expect in modern ultra-high-end graphics cards. In handling the lights, Colorful offers the iGame-Zone II overclocking and LED controlling software. Toggling the “Turbo / Normal” labelled BIOS switch on the PCIe bracket activates Colorful’s “one-key” overclocking, a feature found on their other cards. This adjusts the base and boost core clocks upwards as listed in the prior table. Colorful's picture seems to show a 2 DP/2 HDMI configuration even though the specifications list 3 DisplayPorts and 1 HDMI port, so it's unclear whether the posted bracket picture is completely accurate. 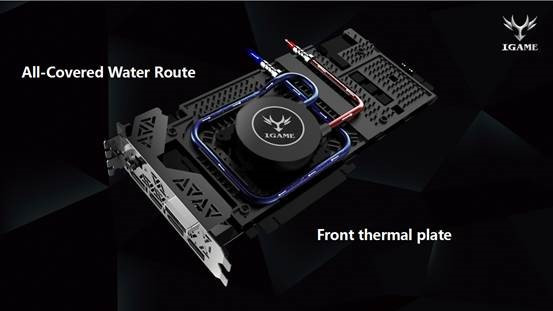 Details on the card’s cooling design were light. The water block appears to cover only the GPU while the cold plate/waterpipes complex covers the rest of the key components. In any case, a 240mm radiator setup is practically unknown in AIO graphics card designs and deserves mention. Although the extra cooling capacity is not fully harnessed with the listed TDP and the dual 8pin power configuration, the 240mm AIO CLC is an easy way for Colorful to differentiate the Neptune W from the competition, particularly if the increased cooling performance significantly enhances overclocking headroom. 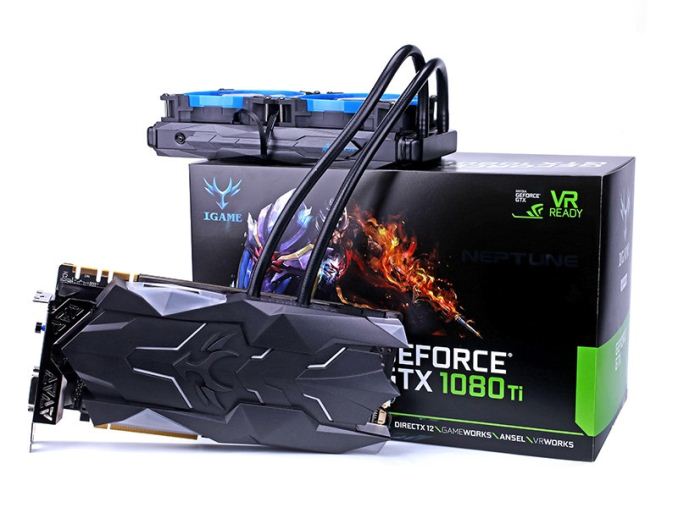 As novel as a 240mm radiator may be, Colorful is not one to stray from envelope-pushing designs: the recent past has seen them showcase a gargantuan 4-slot hybrid cooled graphics card with their iGame GTX 1080 KUDAN, while the aforementioned Vulcan X OC is furnished with an LCD screen not unlike Palit’s GALAX/KFA2 1080 Ti HOF. Such products are not surprising in the context of the company’s size: in 2015, Digitimes reported that Colorful was on track to be the second largest graphics card vendor in the world. With the potential prospect of ultra-high-end iGame cards hitting the Western markets, the Colorful name may not be unknown in the West for much longer.