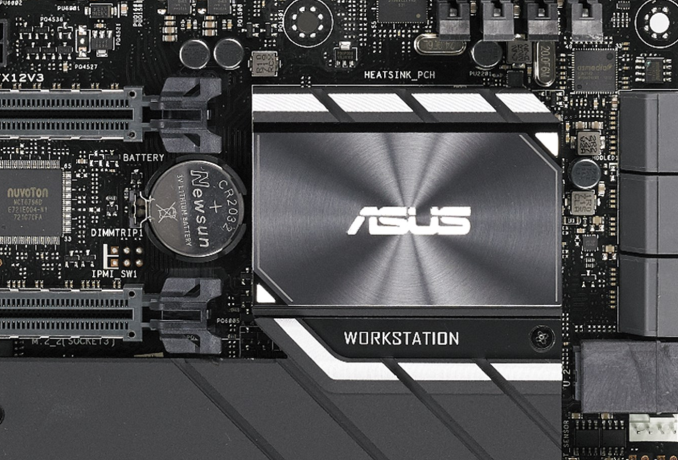 ASUS has now released the WS X299 Pro, a motherboard designed to be a workstation level platform for X299 processors. None of the features seem to stand out as making this motherboard a true 'workstation' motherboard, however, it does support multiple storage types (dual M.2 and a U.2), dual Intel network controllers, a COM port interface, and reinforced PCIe slots.

The all-black PCB has a chipset heatsink with the ASUS name on it as well as some silver highlights, but the heatsink increases its surface area by extending into two M.2 heatsinks as well. There are two heatsinks connected via a heat pipe for the 8-phase power delivery, which uses dual EPS 12V pin connectors to supply enough power to the top processors. The design of the heatsinks is professional-like: simple with a brushed aluminum/silver look on it. The back panel IO is not covered with a shroud, and RGB LEDs are not integrated on this board given the workstation nature, but there are two RGB strip headers, oddly enough. 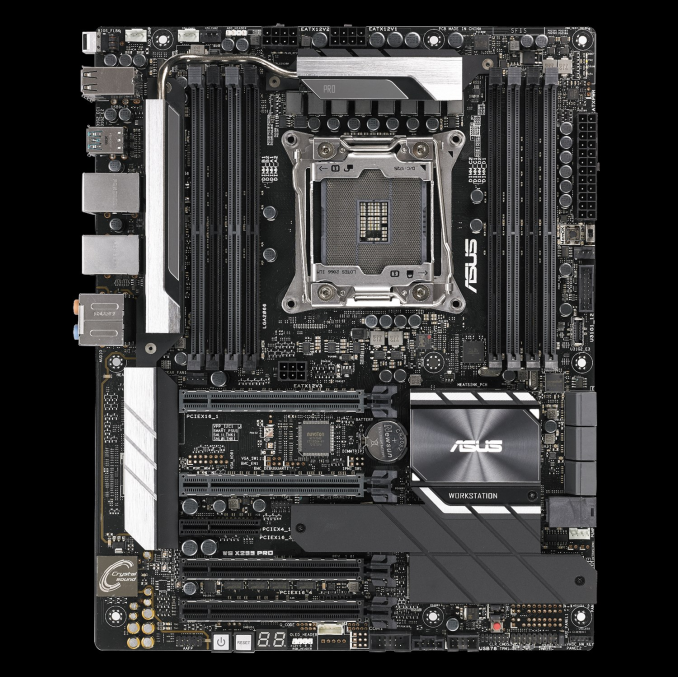 Based on the X299 chipset, the WS X299 Pro supports LGA 2066 CPUs including both Skylake-X and Kaby Lake-X based processors. It comes with the typical complement of eight memory slots supporting up to 128GB of DDR4 running at speeds up to DDR4-4133 in quad channel. If a quad-core Kaby Lake-X CPU is installed, supported speeds remain the same; however maximum capacity is then 64GB in dual channel. The board and CPUs do not support ECC memory, nor do they support Xeon-W CPUs.

Storage options include six SATA ports, a PCIe 3.0 x4 U.2 port, and dual M.2 slots. The M.2 slots are both covered by heatsinks in order to help dissipate the heat generated from the drives underneath. Both M.2 ports support SATA and PCIe 3.0 x4 modules. The SATA ports support RAID 0, 1, 5, and 10. Despite offering three PCIe based storage ports between U.2 and M.2, bandwidth is shared between the second M.2 slot and the U.2 port. SATA bandwidth is also shared between the first M.2 slot and the first SATA port when a SATA M.2 drive is installed - exact configurations available will be part of the manual. The motherboard also has Thunderbolt 3 support via a 5 pin header located on the bottom of the board for add-in cards.

Network capabilities on the WS X299 Pro are handled by a dual Intel I210-AT gigabit network controllers. Not making an appearance on the network side of things is a 10 Gigabit LAN port, nor wireless capabilities, perhaps indicating that this is going to be a 'cheaper' level workstation product.

ASMedia controllers handle USB 3.1 (10 Gbps) connectivity, with a Type-A and Type-C port on the back panel, and an internal header for a front panel port. The chipset manages six USB 3.1 (5 Gbps) ports with four found on the back panel and another two from internal headers, as well as six USB 2.0 ports in a similar fashion. The WS X299 Pro has a total of four full-length PCIe slots from the processor, all reinforced, and one open-ended PCIe x4 slot from the chipset. Lane breakdowns will vary by CPU used: when using a 44 lane CPU, we get an x16/x16/x4(c)/x8/x4, a 28 lane CPU is x16/x8/x4(c)/x4/x0 while a Kaby Lake 16 lane CPU is x8/x4/x4(c)/x4/x0.

Audio duties are handled by the Realtek ALC S1220A codec, featuring ASUS' enhancements under the Crystal Sound 3 banner. ASUS worked with Realtek on the S1220A to give their own spin on the base ALC1220 codec, essentially removing some un-needed hardware to save power. The board has an auto impedance sense for the front and rear headphone outputs, its own internal audio amplifier, support for DTS connect, de-pop circuitry, and premium Japanese audio capacitors.

Pricing nor availability was listed at the time of writing. ASUS has not fully fleshed out its product page on the ASUS website yet, detailing any specific workstation features. It is possible that warranty might be one of them, which will be region dependent, or that they are offering this product as a B2B. We will add more information when we get it.