Corsair managed to design the AX1600i to be a visually imposing product with an elegant, yet not extravagant design. Amazingly, even with its increase in power output, the AX1600i actually is physically smaller than the AX1500i. The chassis of the AX1600i measures 205 mm × 150 mm × 86 mm (D × W × H), making about two centimeters shorter than the AX1500i. The chassis has chamfered edges and embossed ridges create a subtle decorative effect. The ridges are also aligned with the design of the fan's finger guard, improving aesthetics even further. 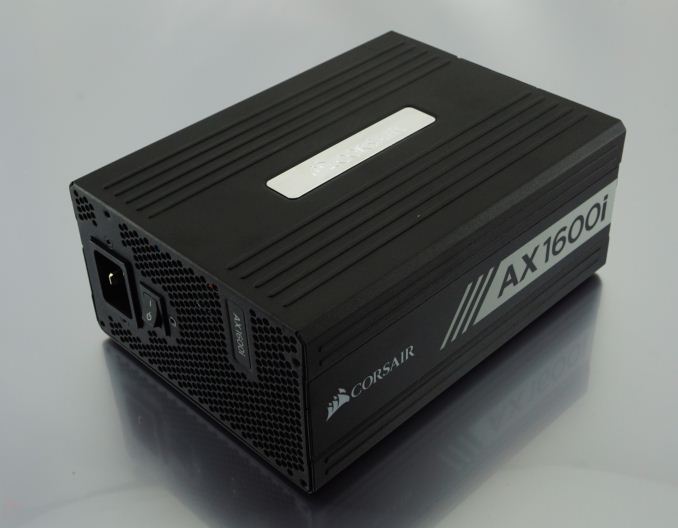 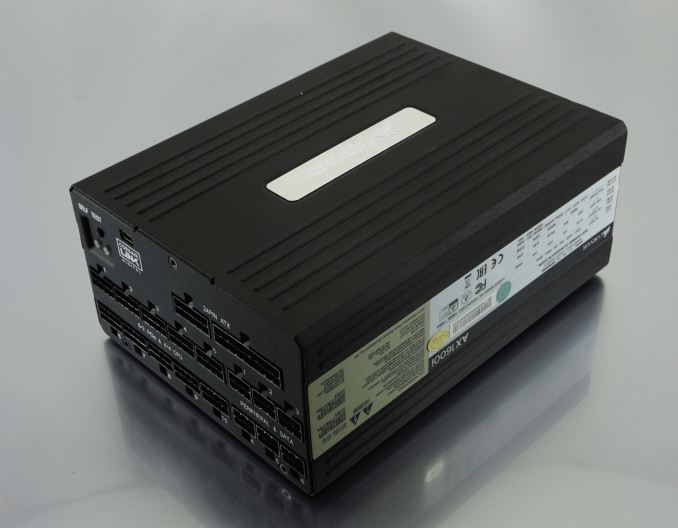 A chromed sticker with the company's logo can be seen at the top side of the unit and grey decorative stickers cover the largest portion of its sides. The side stickers can be (permanently) replaced with those supplied with the unit's bundled items. The sticker with the unit's specifications and certifications has been moved to the right side of the chassis, hidden away in cases that have a windowed left side panel - unless the PSU is installed with its fan facing upwards, that is. 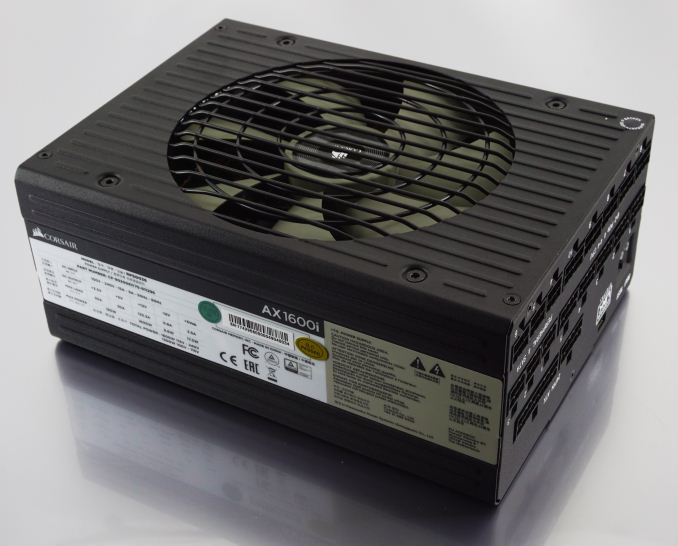 The rear side of the AX1600i seems typical for a computer PSU but closer inspection reveals some secrets. A small power switch can be seen next to the C20 receptacle, yet it's far too small for a unit with this kind of output. The switch does not cut off the AC input but signals the inrush current relay, deactivating it and completely isolating the PSU from its AC connection. A small badge of the unit's model can also be seen towards the right side of the unit. 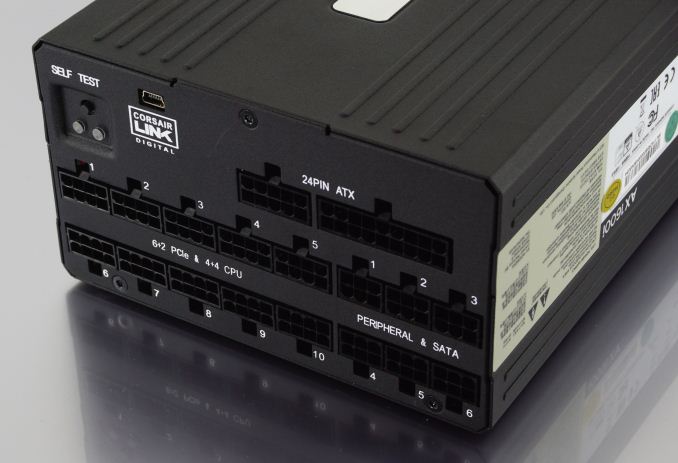 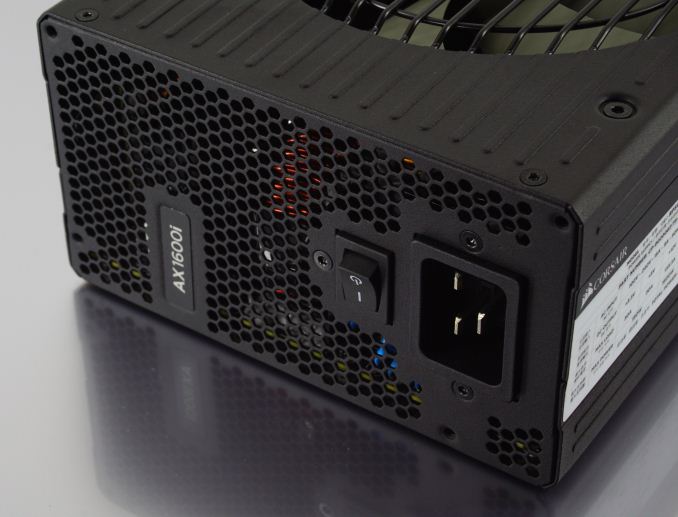 As expected, the front of the chassis is littered with the modular cable connectors. There are ten connectors for the PCIe and EPS cables alone, six for SATA/Peripheral cables, and two split connectors for the 24-pin ATX cable. It is easily noticeable that the connectors for the 24-pin cable actually sum up to 30 pins. That is because of the extra voltage sensing wires that the design is using to adjust its output in virtually real time. There is also a self-test button that forces the PSU to start and run a basic operational test, as well as a micro-USB connector for the Corsair Link interface.

The AX1600i is one of Corsair's few units that is using a full-size 140 mm fan instead of a 135 mm fan. It is a Corsair-branded fluid dynamic bearing (FDB) fan. No detailed specifications regarding the fan can be found but our instruments measured a maximum speed of about 2100 RPM and a maximum air volume flow of about 75 CFM. 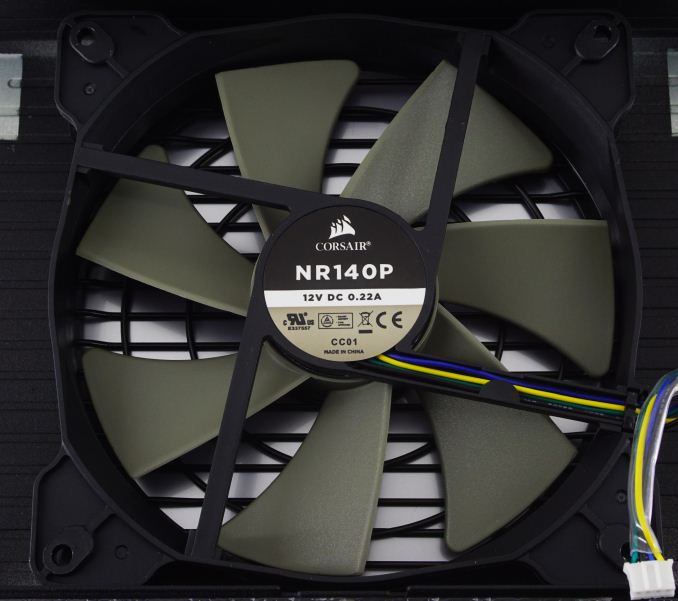 Although we honestly expected that the AX1600i would be just a small update of the AX1500i, that could not have been further from the truth. The AX1600i practically is an entirely new platform. The OEM of the power supply is Flextronics, the same company behind the AX1500i, but the AX1600i is drastically different. 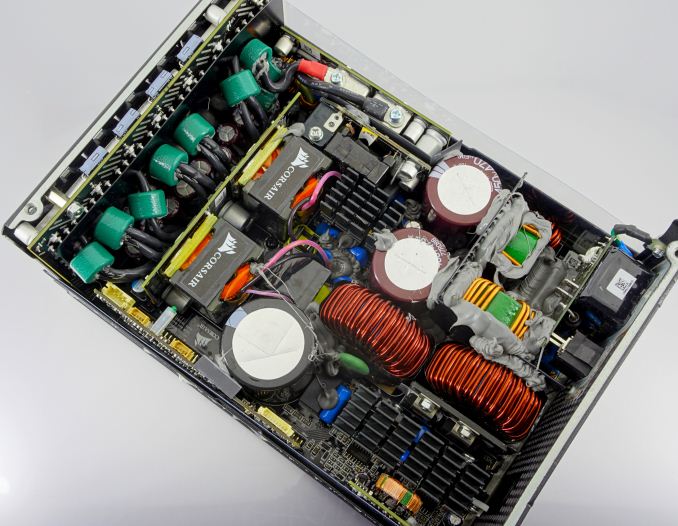 The filtering stage begins at the rear of the AC receptacle and continues on the main PCB. We counted a total of six Y capacitors, two X capacitors and four inductors. There is also a X capacitor discharge IC that improves the overall performance of the X capacitors, increasing their efficiency and reducing the inductor requirements. 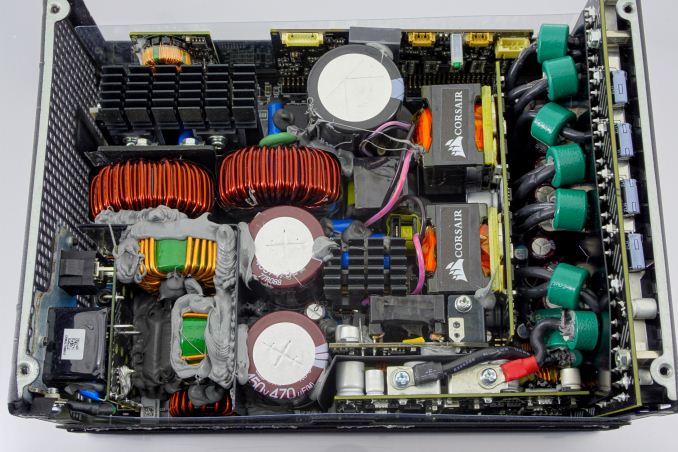 The AX1600i does not have a "classic" PFC circuit but a digital "bridge-less" converter similar to the one we saw in AX1500i. In theory, classic APFC designs top out at 96% efficiency and the Totem-Pole Bridgeless PFC design that Corsair is using could reach up to 99%.

Corsair however took things a bit further and, in what's easily the most interesting aspect of the PSU's design, replaced the normal MOSFETs with Gallium-Nitride (GaN) MOSFETs, which are even more efficient. GaN has long been under development for use as a replacement for silicon in transistors, and that development is finally paying off with consumer products. Which isn't to say that this is the sole innovation of the AX1600i or even the only element contributing to its improvements, but it's easily the most exciting.

In any case, buffering these new MOSFETs we find three very large capacitors, two from Nippon Chemi-Con (450V/470μF) and one from Rubycon (450V/680μF) are present here. 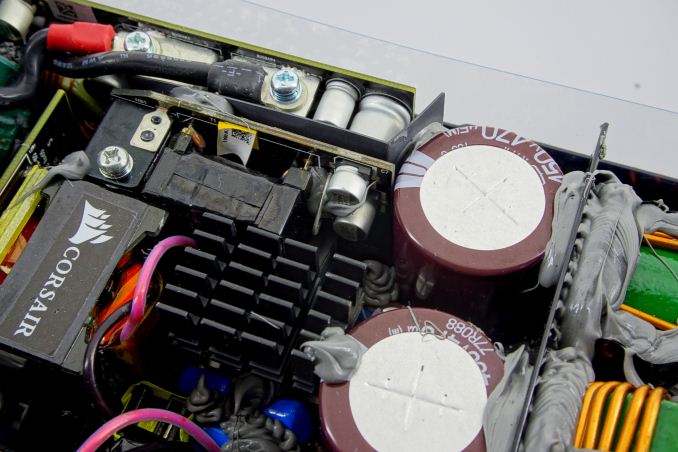 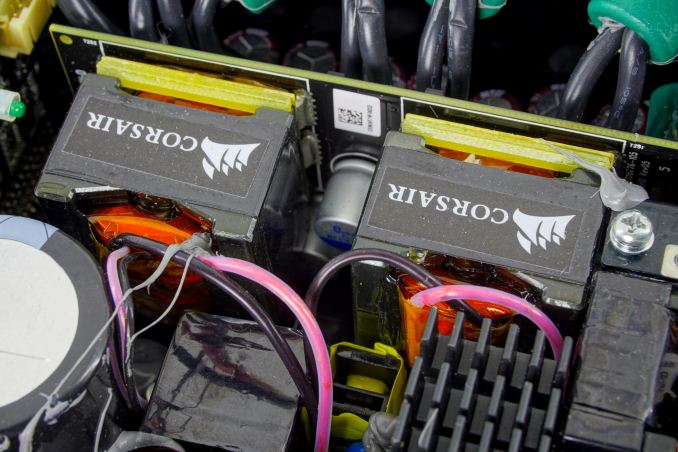 Moving towards the primary inverter, we find a full-bridge design with an LLC resonant controller. Aside from the ultra-high efficiency MOSFETs, there is nothing about the primary side that we have not seen in many other high efficiency designs. At the secondary side of the transformers we find a synchronous converter - or two, as the topology essentially resembles that of two circuits working together in parallel. Synchronous converters are also common but not one with sixteen MOSFETs for the 12V line alone. The 5V and 3.3V lines are generated via additional DC to DC converters. The secondary side electrolytic capacitors are all provided by Nippon Chemi-Con. Most of the polymer capacitors are also provided by the same company but a few Nichicon products can be spotted as well. 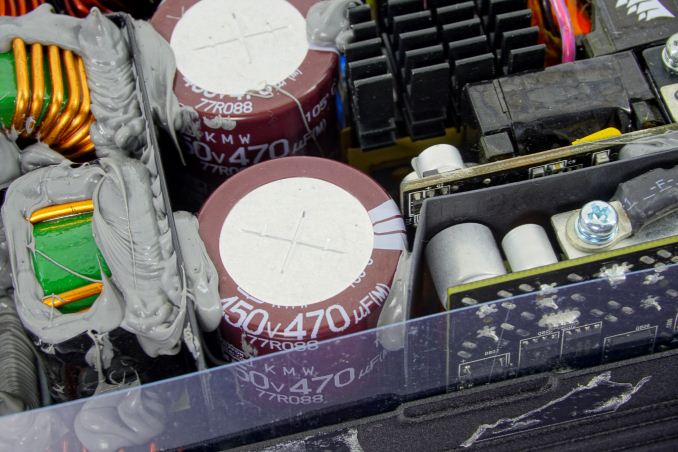 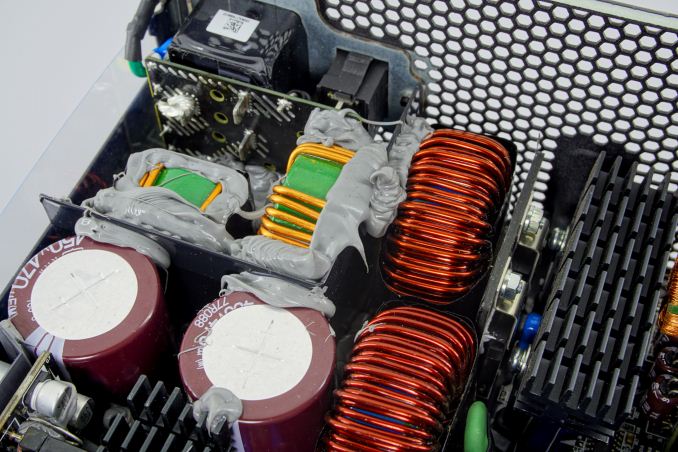 Both the primary and the secondary side of the AX1600i are digitally controlled via their own digital controllers. A microcontroller unit is also present, providing the Corsair Link interface capabilities.