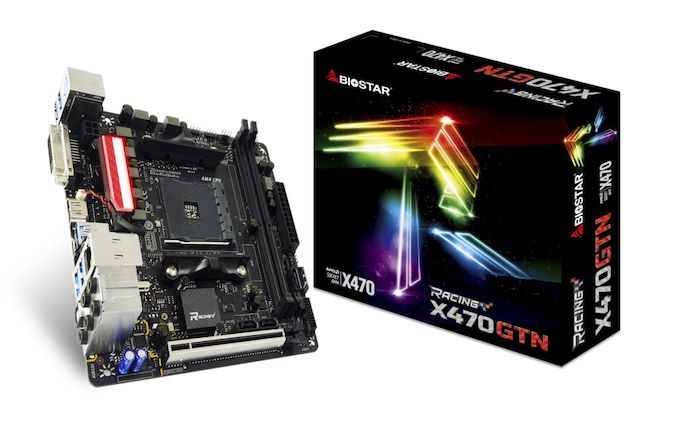 Last year Biostar released the first mini-ITX AM4 motherboard and it did its utmost to impress us without too much fluff or unnecessary features - it was a simple yet sophisticated runner. With the release of the second generation of Ryzen processors, Biostar has released a refreshed mini-ITX for the X470 platform, called the X470GTN which looks again to target the budget-conscious users looking for Ryzen in a smaller form factor.

The Biostar X470GTN is a gaming-centric mini-ITX motherboard with a purported focus on providing users with a cheaper route into a potentially powerful eight-core small form factor powered system. Just like the previous first generation X370GTN board which I reviewed last year, Biostar has given the X470GTN a visual makeover of sorts, but the core characteristics between both boards remain very much the same.

The most notable difference between both the new Biostar X470GTN and the old is a metallic slot protection coating on the full-length PCIe 3.0 x16 slot. One main returning feature is an RGB LED-infused MOSFET heatsink which is there to provide cooling to the CPU section of the power delivery while offering an element of visual customization to users. As far as the visual differences between the two small form factor AM4 boards on paper go, that’s about it, so don’t feel weird if a case of déjà vu hits you back from our previous Biostar X370GTN motherboard review. 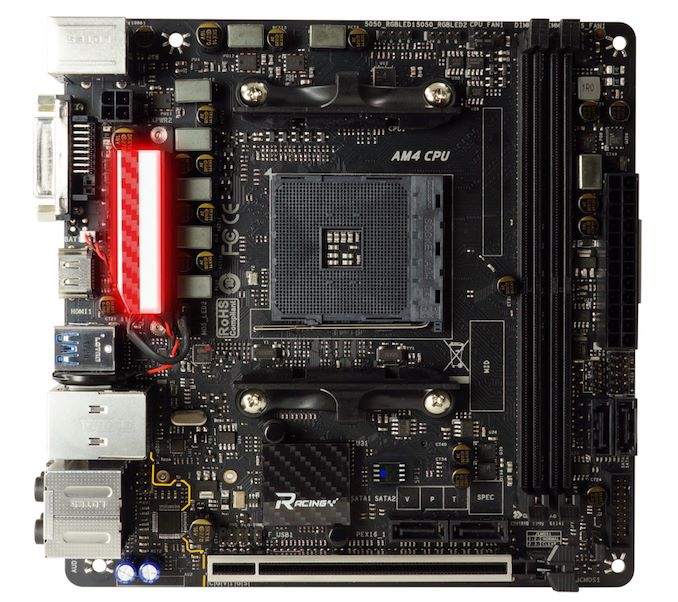 The Biostar X470GTN is a mini-ITX sized small form factor AM4 motherboard aimed at gamers on a budget. Like a variety of lower cost AM4 motherboards, the Biostar has a pairing of budget-friendly Realtek controllers to handle the onboard audio (ALC892) and networking capabilities (RTL8118AS). The Realtek ALC892 opens up compatibility for HD audio with up to eight channels, with the Realtek RTL8118AS offering users a single 'gaming' Gigabit LAN port on the rear of the board. The 8118AS is actually the smallest gigabit network controller available. While the Biostar X470GTN is suitable for use with all of AMD's current Ryzen desktop first and second generation processor line up, support is also granted for AMD's Ryzen 2000 series APUs. To that end, it also has a DVI-D and an HDMI 1.4 output.

While the low-cost nature of this specific mini-ITX motherboard has been mentioned numerous times, users can purchase the X470GTN for around $130 depending on the retailer. While this is not technically the cheapest AM4 socketed mini-ITX motherboard on the market, as the X470GTN commands a $20 premium over the previous X370GTN model, other boards such as the Strix X470-I and the X470 Gaming-ITX/ac costing considerably more. The increase in price over the previous X370GTN model is rather hard to pinpoint on the surface, but Biostar doesn't omit any of the key features this time around such as the RGB LED bar in the MOSFET heat sink, as well as still including two RGB 5050 headers to expand that desirable and customizable RGB through the use of RGB LED strips. A likely contributing factor to the cost is the slot protection on the solitary full-length PCIe 3.0 x16 slot which is designed to provide physical protection to the slot from the installation of heavy and bulky graphics cards, but it still doesn't equate to a premium of $30. This is a recurring theme throughout the review. 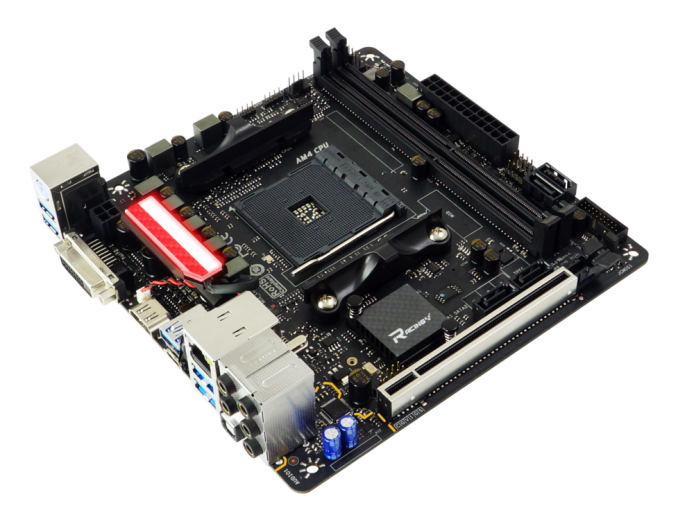 Storage options include four straight angled SATA ports and a single PCIe 3.0 x4/SATA capable M.2 slot which is located on the rear of the motherboards PCB. Cooling wise the Biostar X470GTN is limited by its size and ultimately its price point as only two 4-pin headers are present for cooling, one specifically for a CPU fan and the other acting as a system fan header. The board's memory support comes through a pairing of slots with the ability to support DDR4-3200+, with a maximum supported capacity of up to 32 GB cumulative across both channels.

The X470GTN carries a 4+3 phase power delivery which is governed by the Intersil ISL95712 PWM controller. The power delivery has a total of seven Nikos PK612DZ dual N-channel MOSFETs with a total of three drivers and seven chokes finishing off what is a competitive configuration for the price point.

The rear panel on the Biostar X470GTN hasn’t changed at all over the previous iteration and doesn’t just share the same connection selection, but also features the same layout; it’s actually identical in every way. Featured is a pairing of USB 3.1 Gen2 connections including a Type-A and Type-C port, with an additional four USB 3.1 Gen1 Type-A ports on the rear panel with the option available to expand to another two addition USB 3.1 Type-A ports due to a single internal header. In addition to this is a single USB 2.0 header. The five 3.5 mm gold plated audio jacks and single S/PDIF Optical output take their commands from the Realtek ALC892 audio codec and the single LAN port is powered by a Realtek RTL8118AS Gigabit networking controller. A single PS/2 combo port for legacy keyboards and mice are present and a pairing of video outputs consisting of a DVI-D and HDMI 1.4 completes the rear panel.

Performance wise Biostar has things on point with a strong showing in some of our system and compute benchmarking suites. Not only did the X470GTN report the fastest non UEFI POST time of any AM4 motherboard so far, but it also managed to top our DPC latency test which marked an impressive improvement from the value given from the previous X370GTN model. Other notable and favorable results came in our 3DPM and POV-Ray benchmarks. Overclocking performance was also very good as the boards grasp of voltage control was what should be expected from a top-tier offering with voltages set within the BIOS (voltage offset) and in Ryzen Master equaling what was monitored at maximum load using the CPU-Z monitoring utility.

As Biostar is being somewhat aggressive with their pricing structure, and although on paper the X370GTN certainly pips the X470GTN in terms of value when it comes to performance, the added RGB implementation into the power delivery heatsink is likely to attract some users looking for something they can customize to make their system stand out from the rest. The board does feature USB 3.1 Gen2 connectivity at a competitive price point and as it currently stands, the Biostar X470GTN is the cheapest X470 mini-ITX board on the market, and its main competition is the X370GTN.