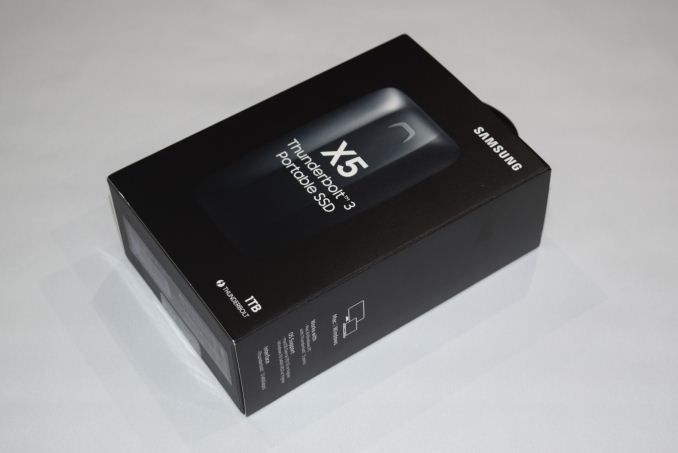 The rising popularity of Thunderbolt 3, coupled with the emergence of NVMe SSDs in the compact M.2 form-factor, has enabled a new class of portable bus-powered high-performance flash storage devices. Samsung is launching their first Thunderbolt 3 SSD, the Portable SSD X5, today. Unlike the recent crop of affordable TB3 SSDs that use a PCIe 3.0 x2 NVMe SSD with a Phison controller, Samsung has gone in for a premium solution. The X5 places an OEM version of their 970 EVO NVMe SSD (3D TLC V-NAND and the Phoenix SSD controller) behind an Alpine Ridge Thunderbolt 3 to PCIe bridge. The X5 is available in three capacities - 500GB, 1TB, and 2TB, at prices ranging from 70c/GB to 80c/GB. Samsung sampled us the 1TB version for evaluation.

The Samsung Portable SSD X5 is a 119mm x 62mm x 19.7mm external SSD. It features a bright red underside and a dark grey chassis, and is fully made of magnesium. Coming in at 150g, it is considerably heavier than the Patriot Evlvr (88g) and the TEKQ Rapide (135g). The main contributor to this heft is the solid internal heat sink. The X5 sports a single Thunderbolt 3 interface for both power and data. The port is enabled by the Intel JHL6340 Thunderbolt 3 Controller - note that this belongs to the Alpine Ridge family, and hence, works only with Thunderbolt 3 Type-C ports. 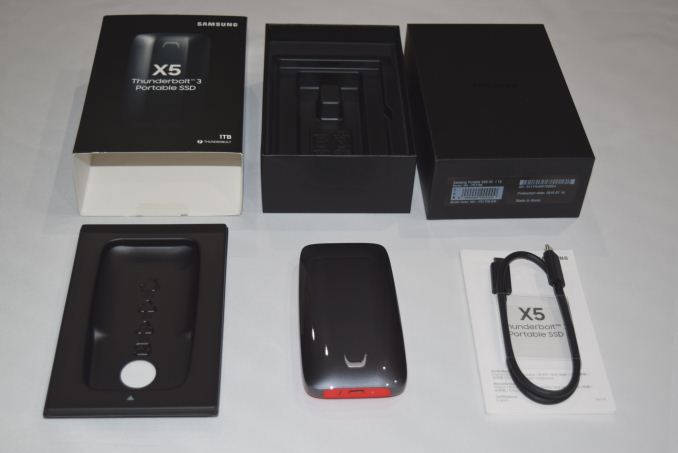 Samsung claims read and write speeds of up to 2800 / 2300 MBps. 256-bit AES encryption is also available with no performance penalty. This is enabled by the Security feature of the Samsung Portable SSD application (the same program that is being used with the T3 and T5 portable SSDs). Samsung also supplies a 0.5m Thunderbolt3 cable along with the X5.

Prior to looking at the internals, CrystalDiskInfo provides some insights. 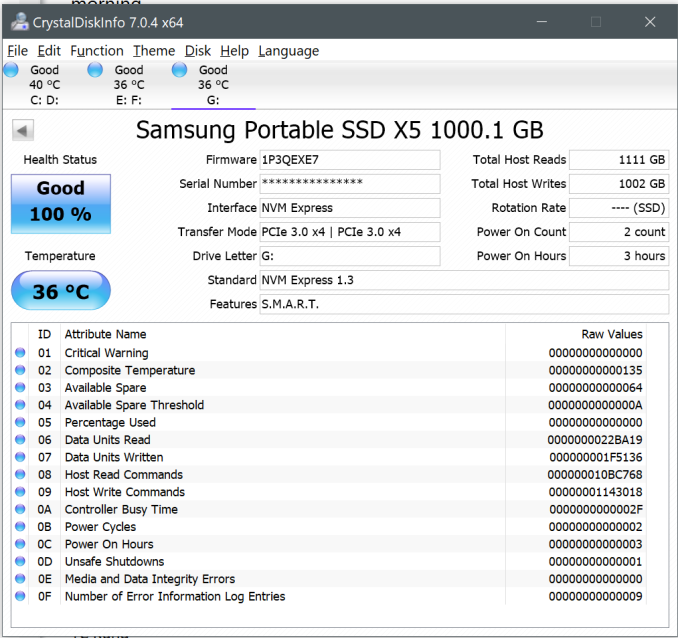 We note that the drive supports NVMe 1.3, which is available only in the 970 EVO and not in the 960 EVO. Samsung also makes it clear in its launch material / press release that the X5 uses TLC V-NAND internally. Even though CrystalDiskInfo puts only SMART in the features section, we did see support for TRIM. The Thunderbolt link is essentially invisible to the tool, with NVM Express listed as the interface. For all practical purposes, the Samsung Portable SSD X5 is a PCIe 3.0 x4 NVMe SSD in the system.

The X5 proved to be a bit of a challenge to disassemble. While the screw behind the product sticker on the underside was easy to figure out, the removal of the strip around the Type-C port was anything but simple. There are two tabs on either side that attach the strip to the rest of the chassis, but, these tabs are hidden out of sight and are quite difficult to push in. There are two hidden screws behind the strip, but, beyond that, it was straightforward to take out all the different components. 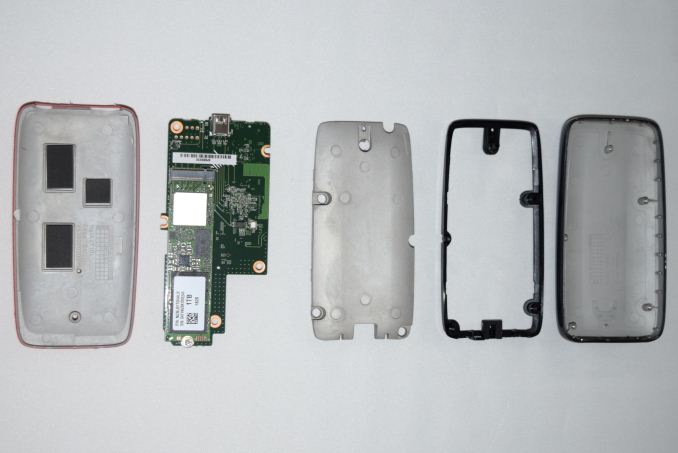 The gallery below provides a closer look at some of the internal components. On the underside of the chassis, we find thermal pads for the Thunderbolt 3 controller and other components of the main board. On the other side, we have the heavy heat sink kept in place with appropriately positioned standoffs that are part of the top frame die-cast, along with a plastic frame that goes around the perimeter of the metal piece. There are thermal pads that take the heat away from the internal SSD and transfer it to the heat sink. The main board's PCIe 3.0 x4 connector is used to interface with the Samsung MZBLB1T0HALR, a minor variant of the Samsung 970 EVO. The controller on the SSD (Phoenix) is the same as the 970 EVO.

The X5 also employs a thermal management technology, 'Dynamic Thermal Guard', that throttles the performance of the internal SSD to keep the operating temperature around 45C. We will look into this in detail in a later section.

The Samsung Portable SSD X5 is plug-and-play except for the small matter of allowing Thunderbolt security to allow one's system to act as a host for the device. Once approved (needs to be done only once per system if the 'Always Connect' option is chosen), the device mounts as a exFAT volume. This allows for compatibility with both Mac and Windows devices. Since the X5 breezed through our benchmarks in very little time, we were able to evaluate the unit with the volume formatted in exFAT and NTFS.

The X5 ships with a copy of the Samsung Portable SSD software in the drive (both Windows and Mac versions). The gallery above shows the usage of the software to password-protect the drive. There is no performance penalty for enabling this security feature.