SteelSeries is a company known for their discreet designs and the Apex M750 is no exception to that rule. The keyboard sports soothingly simple design, with smooth curves and clean flat surfaces. The company's logo at the top right corner of the keyboard is all that breaks the flatness of the minimalistic design. This design has the mechanical keys "floating" above the aluminum surface of the keyboard, allowing for easier cleaning and reducing the keyboard's bulk and weight.

We received the US layout version of the SteelSeries Apex M750. It is a standard 104 keys keyboard that fully adheres to the ANSI layout. There are no volume control knobs, extra media keys, or any other extra keys/buttons to be found. The bottom row of the keyboard has a 6.25× Spacebar and seven 1.25× bottom row keys. SteelSeries replaced the right "menu" key with a key that bears the company's logo and can be used to access some of the keyboard's advanced features on-the-fly.

A closer look at the keycaps reveals that they are standard height ABS plastic keycaps, meaning that they are also easily replaceable with most keycaps designed for Cherry MX switches (or, in this case, their clones). Large bold characters are etched on the keycaps, with the secondary character at the bottom half of the keycap. There is nothing special regarding the keycaps of the Apex M750, at least not in comparison to its immediate competition. 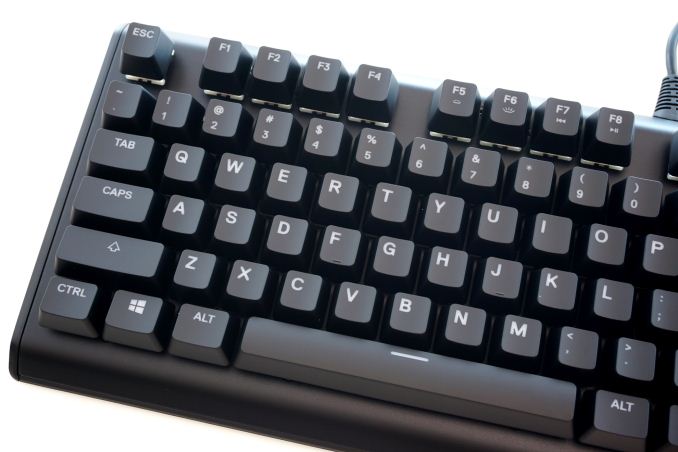 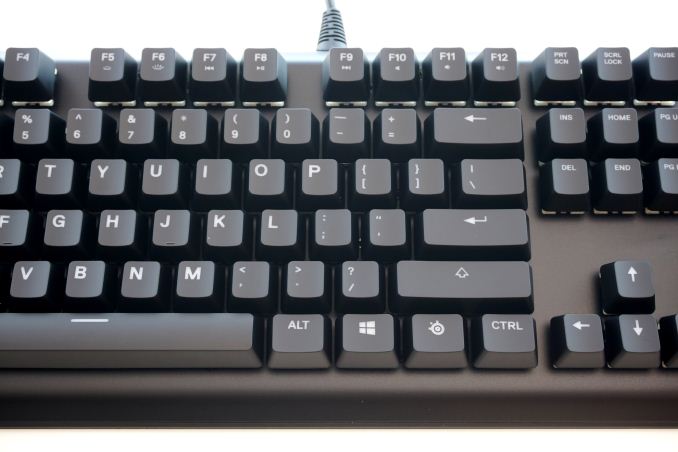 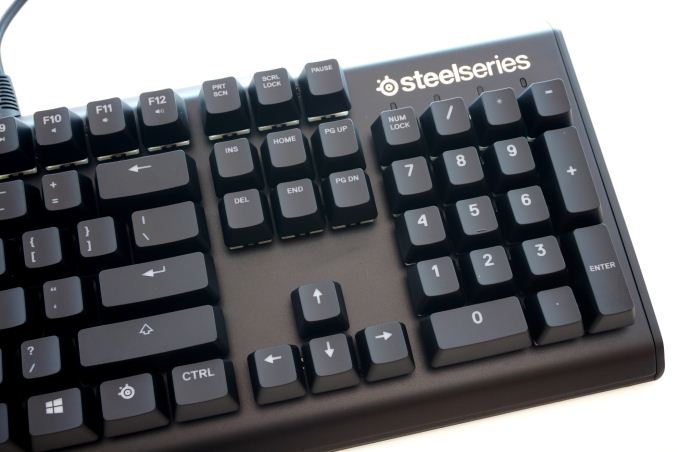 The low-profile keycaps are made from ABS plastic and have normally sized characters printed on them. These keycaps do not affect key travel, which remains at four mm, the same as with most mechanical keyboards currently available. Both of the primary and the secondary character is printed at the top of each keycap, which is a tactic frequently used with mechanical keyboard so as to place both characters over the lighting LED. The catch here is that the lighting of these switches is uniform around the stem, so using such switches on this keyboard is virtually meaningless. These keycaps are most likely coming from a production line that is supplying the same keycaps for use on mechanical keyboards as well.

As the Apex M750 has no dedicated media keys, media and other advanced controls are accessible only via keystroke combinations using the "SteelSeries" key. Even then, the company kept functions down to an absolute minimum. By default, users can only adjust the brightness of the backlighting (F5-F6) or access basic media and sound volume controls (F7-F12). The SteelSeries Apex M750 is not nearly as simple as that though, as it is a fully programmable keyboard and can be greatly customized via its software.

The curved underside of the keyboard is a little interesting, with a glossy center part and large rubber stripes/legs. SteelSeries removed the standard feet that keyboard have for tilt adjustment and replaced them with removable rubber pads. Like every other keyboard, the Apex M750 has two tilt settings - one is almost flat or, by replacing the rubber pads with those in the package, the keyboard gains a permanent tilt of a few degrees. The rubber pads have the advantage of not closing/folding/breaking if mishandled during a heated gaming session. 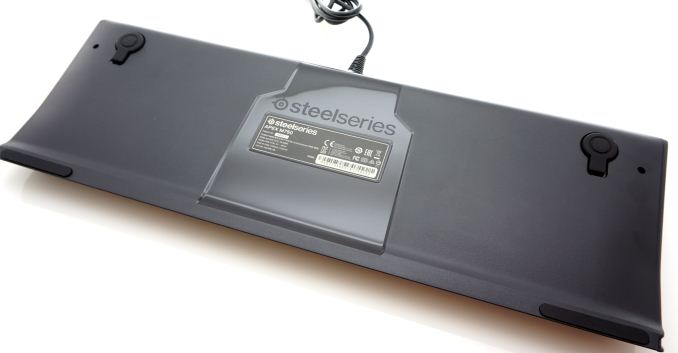 Beneath the keycaps we find the company's new QX2 switches. The switches appear to be a perfect copy of Cherry MX Red RGB switch, mimicking practically everything - the travel distance, actuation force, clear frame, RGB LED at the top, everything but Cherry's logo, which has been replaced by the SteelSeries logo. An experienced user can tell the difference between the QX2 and the original Cherry MX switch, as the keys of the Apex M750 wobble noticeably more than those of a Cherry product. The wobble is not dramatic but the shaky movements seem to add to the overall noise output of the keyboard slightly, plus they deteriorate the otherwise premium feeling of the keyboard. 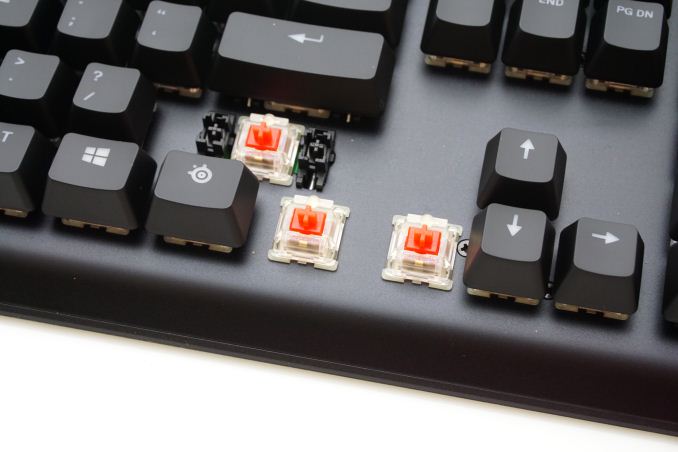 The RGB backlighting turns the minimalistic Apex M750 into a colorful festivity. With the RGB LED at the top of each switch, the secondary characters are obviously underlit, a common issue with this particular design. Other than that, the lighting is vivid and clean, with the clear frames of the switches smoothly diffusing it around every key. The backlighting is fully programmable via the keyboard's software. By default, the Apex M750 combines the effects of a rainbow flow pattern plus a ripple-per-keypress reactive lighting. Impressive as this may be, so many effects are just too distracting, probably even just for gaming. Working in a dark room with the keyboard's default lighting configuration is practically torture.

Opening up the Apex M750 reveals that the top aluminum cover is the very frame of the keyboard, with the plastic rear only serving as a cover for the PCB. The switches were attached directly to the well-machined aluminum sheet and then the PCB was soldered directly in place. The design is very simple and yet very practical.

The core of the Apex M750 is a powerful STMicroelectronics STM32F072C8 microcontroller, with a high performance 32-bit ARM processor at 48 MHz. The chip has an internal 64 Kb of flash memory plus 16 Kb of SRAM, as well as advanced 32-bit and PWM timers. It is not the most powerful microcontroller that we have seen used in a keyboard but it definitely suffices for the capabilities of the Apex M750. 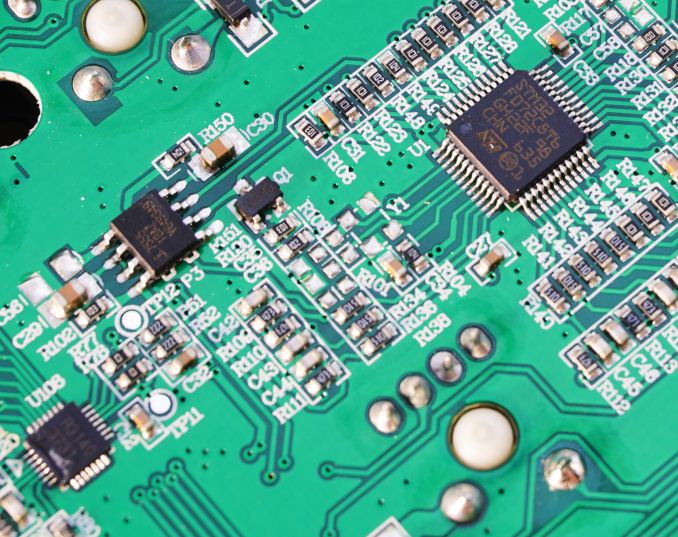