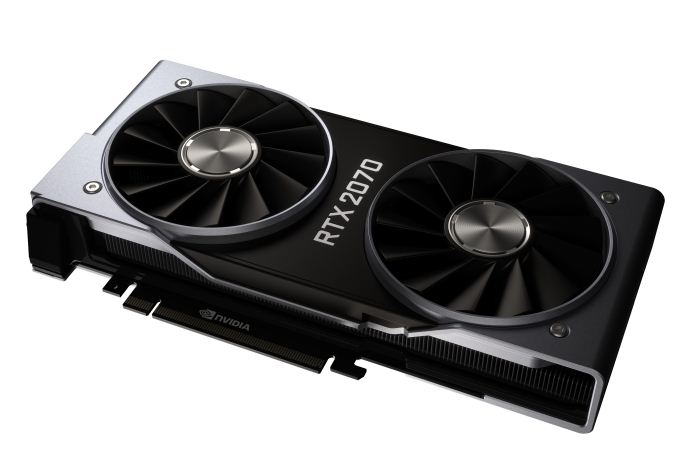 With the release of the GeForce RTX 2080 barely behind them – and the RTX 2080 Ti technically still in front of them – NVIDIA has announced the release date for their next RTX card: the 2070. The previously revealed card, which was scheduled for an ambiguous October, has been locked in for October 17th, where the Founders Edition version will hit the streets at $599.

In line with the general performance progression for the GeForce RTX family, the RTX 2070 is slated to deliver around 75% of the RTX 2080’s performance. The exact performance depending on how each game scales with the smaller collection of resources. The RTX 2070 has about 75% of the shading/texturing/tensor hardware as the RTX 2080, however it has the same ROP count and the same 256-bit memory bus. So we expect that the biggest performance differences are going to be in SM-bound scenarios – now including ray tracing – while pixel-bound scenarios that rely mostly on ROP throughput should take a much smaller hit.

Overall, the RTX 2070 is a bit of a wildcard. Rather than being a cut-down version of the GPU used in the 2080, as has been the case for NVIDIA product stacks for most of the last decade, the RTX 2070 gets its own GPU: the TU106. A third GPU in as many cards has more upfront costs, as NVIDIA has to tape out and manufacture another die, however the 454mm2 GPU allows them to min-max costs by not having to use the larger TU104 to fill what will be greater demand for the cheaper card. Still, like the rest of the RTX 20 series, relatively speaking this is a very large die for this product segment.

Consequently, while NVIDIA is officially setting the MSRP for baseline RTX 2070 cards at $499, we don’t expect to actually see them at that price any time soon. NVIDIA’s own Founders Edition card will carry a $100 premium, pushing it to $599, and we expect NVIDIA’s board partners to follow suit. This will price the RTX 2070 well ahead of current GTX 1080 cards, so it will be interesting to see where the new card fits in the bigger picture.