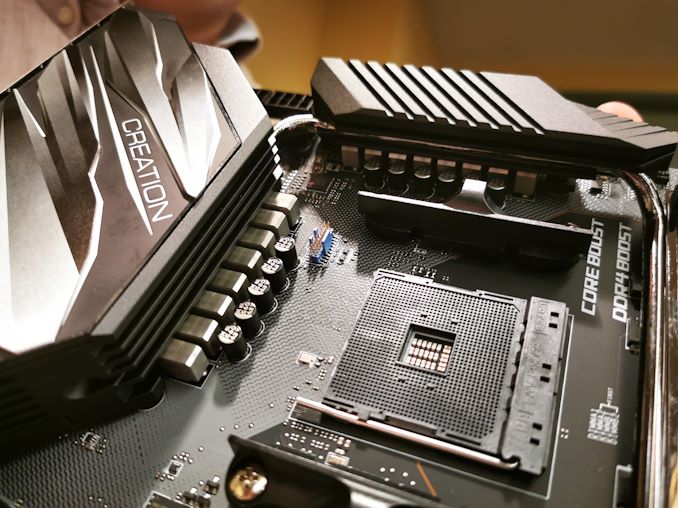 MSI has prepared a total of seven models for the launch of AMD's X570 chipset, but in a new series of boards focused at content creators. The new MSI Prestige X570 Creation includes an Aquantia 10 GbE networking controller, is bundled with an M.2 Xpander, and includes an impressive twelve USB 3.1 Gen2 ports on the rear panel.

The MSI Prestige X570 Creation features similar aesthetics to, and takes certain elements from, the MSI X399 Creation, and implements them onto an E-ATX sized consumer desktop model. On the rear panel cover is an RGB enabled design, with the creation logo being the centerpiece. This covers the large power delivery heatsink which features an extended design from around the MOSFETs, down the four DDR4 memory slots, and into the chipset heatsink. The chipset heatsink keeping the X570 chip cool also includes a cooling fan making this an actively cooled heatsink. 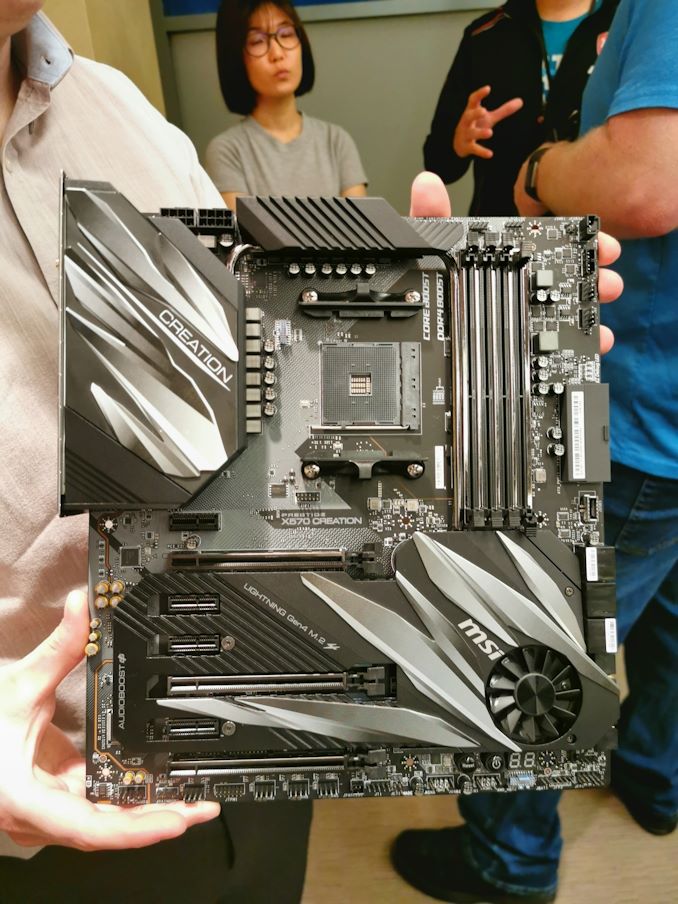 Across the southern part of the Prestige X570 Creation, is a PCB cover which gives the more a more premium look, but it also blends into the aesthetic of the chipset heatsink. On the board is three full-length PCIe 4.0 slots as well as four PCIe 4.0 x1 slots. This means that the X570 Creation supports both two-way AMD CrossFire, and two-way NVIDIA SLI multi-graphics card configurations. Exact details around the power delivery are unclear, but it looks like it could be in a 12+4 configuration. The board has two 8-pin 12 V ATX CPU power inputs, and a single 24-pin 12 V ATX motherboard power input.

With one of the most impressive rear panels for USB 3.1 Gen2 I've seen so far, the MSI Prestige X570 Creation has eleven USB 3.1 Gen2 Type-A, and a single USB 3.1 Gen2 Type-C port. There's also two USB 2.0 ports, a PS/2 combo port, and dual LAN with one being controlled by the 10 GbE Aquantia AQC107, as well as what is expected to be an Intel 1 GbE networking chip.

The MSI Prestige X570 Creation is one of two models (Prestige X570 A Pro) targeting content creators and is likely to be released sometime before AMD launches the new 3rd generation Ryzen 3000 Matisse processors.