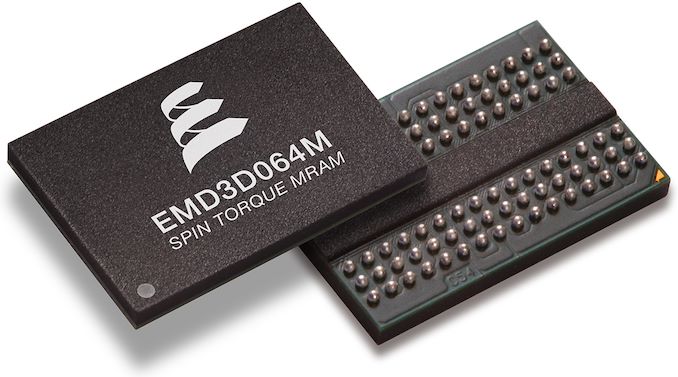 GlobalFoundries and Everspin have announced that the two have extended their Spin-transfer Torque (STT-MRAM) joint development agreement (JDA) to 12LP (12 nm FinFET) platform. The extension will enable GlobalFoundries to produce discrete MRAM chips using their 12nm processes as well as to embed MRAM into chips designed for its 12LP manufacturing technology, which is being used for numerous applications.

The two companies have a long collaboration history that goes back to 40 nm bulk fabrication process and extends to 28 nm HKMG as well as 22 nm FD-SOI (22FDX). Today, chips made using GloFo's technologies can feature embedded MRAM (eMRAM), whereas Everspin’s 256 Mb and 1 Gb standalone MRAM devices are also fabbed using 40 nm and 28 nm bulk nodes. Scaling STT-MRAM down to 12 nm will allow the two to cut down costs of 1 Gb chips and produce devices of higher capacities in a cost-effective manner.

While existing MRAM chips do not offer huge capacity, they are quite popular for their niche uses. Everspin says that it has shipped 125 million units of discrete MRAM chips to over 1000 clients. Furthermore, based on a report cited by the company, discrete MRAM sales will reach $4 billion by 2029. Meanwhile, as demand extends to higher capacity standalone MRAMs, more advanced process technologies will be needed to make discrete MRAM components.

The addition of eMRAM to GlobalFoundries’s 12LP platform — which includes 12LP and 12LP+ technologies — greatly enhances competitive positions of the nodes, particularly for controller/microcontroller applications that will be released in the coming years. For example, some upcoming enterprise SSD controllers from Phison as well as Sage will use Everspin’s eMRAM, and these two companies will not be alone in using this type of embedded non-volatile memory.

eMRAM is expected to replace embedded flash (eFlash) in devices produced using advanced manufacturing technologies, as NAND made using thin fabrication processes has a number of issues, such as endurance and performance. MRAM can be built using modern nodes and still offer good performance and endurance as it does not use electric charges or current flows, but has magnetic storage elements and relies on sensing the magnetic anisotropy (orientation) of two ferromagnetic films separated by a thin barrier. eMRAM has its limitations, but until other technologies are here, it will be used for numerous devices in the coming years.

Kevin Conley, President and CEO of Everspin, said the following:

“Due to our industry leading partnership with GlobalFoundries, we were first with the commercialization of Spin-transfer Torque MRAM. Further scaling to GF’s 12nm FinFET platform will continue to solidify not only our mutual technology leadership but will provide the next step for STT-MRAM as the future of memory technology.”