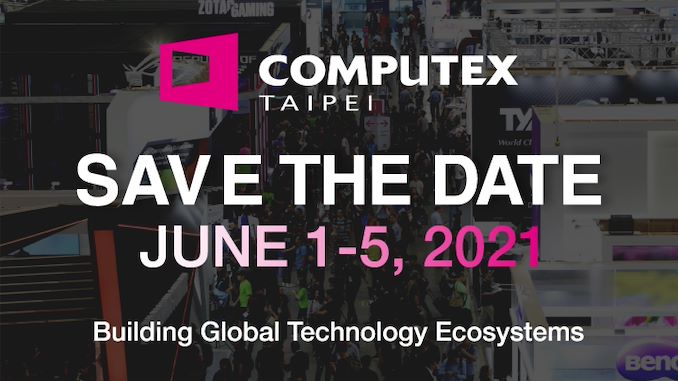 After a protracted battle with the SARS-CoV-2 virus, this year’s Computex trade show has finally succumbed to the pathogen.

One of the world’s largest IT trade shows – and frequently a venue for major PC-related announcements – Computex 2020 was scheduled to take place last week. However due to the coronavirus and all of the health and travel restrictions born from it, back in March the show was delayed and rescheduled for late September. But as it turns out, even a 3 month delay won’t be quite enough to make the show work, and as a result event organizer TAITRA has given up on plans to host the trade show this year.

Calling the latest change in plans a “rescheduling” of Computex, the show has been officially moved to June 1st through the 5th of 2021. Which means that although the show overall has not been canceled and that there will be another Computex next year, for all practical purposes the 2020 show has been cancelled.

In the brief announcement, TAITRA cited the ongoing travel restrictions as being the primary reason for cancelling the 2020 show. Taiwan is still largely banning foreign nationals from entering the country, which if still in place in September, would pose an obvious issue to attending the trade show. At the same time, the original plan to reschedule the show to September was always a bit of a dicey proposition, as the delay put the show out of sync with annual product release cycles and fewer companies were planning to attend, leading to TAITRA scaling down the show accordingly.

Notably, this makes 2020 the first year that Computex has been cancelled entirely. Even in the SARS outbreak of 2003, the show was successfully moved to September. Which goes to show how much more serious and disruptive SARS-CoV-2 has turned out to be.