The mini-ITX form factor is as popular as ever, with a handful of options already available for Intel's new LGA1200 socket. Over the years motherboard vendors have been perfecting their small form factor models designed to offer all of the performance of the larger-sized models, but with a smaller desktop footprint. Of these, two of the most desirable models based on features and pricing from all the mini-ITX models on the Z490 chipset are the GIGABYTE Z490I Aorus Ultra and MSI MEG Z490I Unify. Offering dual PCIe 3.0 x4 M.2 slots, 2.5 GbE Ethernet ports, and integrated Wi-Fi 6 radios, both GIGABYTE and MSI's motherboards are designed to address the high end of the market. And with both boards going for the same price as well, it's easy to see why these Z490 boards have become such worthy adversaries.

Focusing on the two motherboards in our review, both models have similar feature sets and the same MSRP of $270. There is only a handful of Z490 mini-ITX boards currently available, with a couple of entry-level models, as well as some mid to high-end models like the pair we have for review today. Overall, the six mini-ITX Z490 boards that are on the market today range in price from $160 to $300, with both the GIGABYTE Z490I Aorus Ultra and MSI MEG Z490I Unify coming with an MSRP of $270.

On paper, both models are quite similar in specifications, with a 10-layer PCB featured on both, and near-identical power delivery systems based on Intersil 90 A power stages. The most significant difference, aside from aesthetics and minor details, are that the MSI MEG Z490I Unify also includes an Intel Thunderbolt 3 controller, which is one of the features more commonly associated with flagship Z490 boards. So with two very capable and very similar Z490 boards in hand, we'll be reviewing the finer details of these two motherboards, including performance, power delivery thermals, and general differences in a good old fashioned mini-ITX showdown.

Opening up this head to head mini-ITX Z490 review, we have the GIGABYTE Z490I Aorus Ultra motherboard. Clad in the company's typical Aorus-inspired design with a black PCB with white patterning, it includes a black brushed power delivery heatsink which doubles up as a classy looking rear panel cover, as well as a contrasting silver and black chipset heatsink which also doubles as an M.2 heatsink to save space. This means one of the PCIe 3.0 x4 M.2 slots is on the front of the board, while the second is located at the rear, with both slots offering support for both PCIe 3.0 x4 and SATA drives. Offering an element of customization to the aesthetics, GIGABYTE adds an RGB LED strip which creates an underglow effect at the right-hand side of the board, with a further pair of RGB LED headers that allow users to add some more pizazz to a system. 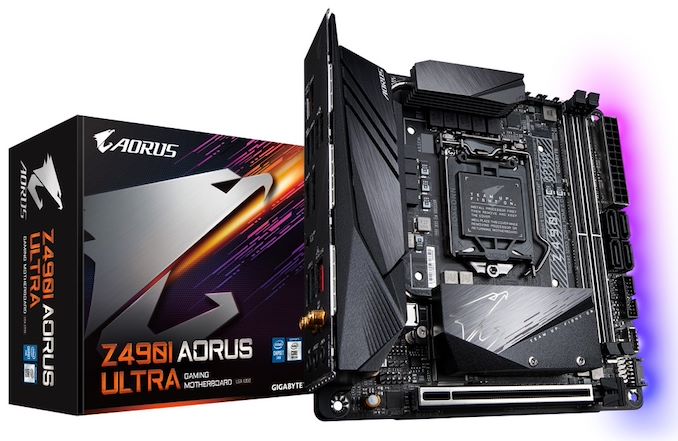 Coming from the previous-generation Z390 boards to the new Z490 models, there isn't that much difference in terms of the chipsets themselves, but one notable improvement across the majority of models is memory support. The GIGABYTE Z490I Aorus Ultra offers support for up to DDR4-5000 which will, in turn, require the integrated memory controller on the CPU to be strong enough to support this. In addition to this, Z490 supports the 32 GB memory modules like Z390 does, which means the Aorus Ultra ITX model supports up to 64 GB across its two memory slots.

For a small form factor model it has a plethora of features with a solid controller set, which includes an Intel I225-V 2.5 GbE Ethernet controller, an Intel AX201 Wi-Fi 6 interface, as well as a Realtek ALC1220-VB HD audio codec. On the rear panel is plenty of connectivity, although the Realtek ALC1220-VB HD audio codec powers just three 3.5 mm audio jacks, and omits the S/PDIF optical output to save space. The limited space also means GIGABYTE doesn't have much to work with to take advantage of the Z490 chipset's greater native USB 3.2 G2 connectivity, so the Z490I Aorus Ultra includes just two USB G2 ports; a Type-C and Type-A pairing. Other ports include four USB 3.2 G1 Type-A and two USB 2.0 ports, as well as a Q-Flash Plus button to allow users to update the board's firmware without fanfare, and a dedicated USB 3.2 G1 port marked on the rear panel to provide this function.

Focusing on the performance, the GIGABYTE Z490I Aorus Ultra performed competitively in our CPU testing, with similar performance in our game testing compared to other Z490 models we've benchmarked. In system performance, the Z490I Aorus Ultra showed quite high long idle and idle power state readings, but redeemed itself in our full load testing with a reading of 212.5 W. In our non-UEFI POST Time testing, it showed pretty fast boot times at default settings with a total POST time of 13.6 seconds. We test DPC latency performance at stock settings in Windows 10 and although the board hasn't been optimized by default, it's still competitive with other Z490 boards.

In our overclock testing, we managed to achieve a maximum overclock of 5.3 GHz on our testbed Core i7-10700K – the maximum our chip can do on ambient cooling methods – although we did experience thermal throttling. In our manual testing from 4.7 to 5.2 GHz, the Z490I Aorus Ultra performed well with decent levels of VDroop on the CPU VCore, which was tighter as we increased the frequency.

The GIGABYTE Z490I Aorus Ultra is a feature-packed model crammed into a small-yet-capable mini-ITX sized frame. It's clear by how jam-packed the PCB is that GIGABYTE has gone all-out with its ITX model, and despite not offering anything special in the way of functions, it has a certain air of quality about it. From the rear panel configuration to the impressive 9-phase power delivery on the 10-layer PCB, GIGABYTE looks to compete with other vendors mini-ITX models with a price tag of $270.

The GIGABYTE Z490I Aorus Ultra is a mini-ITX motherboard and is positioned into the mid-range of the Z490 product stack. It represents its gaming-focused Aorus brand and as such, features an aesthetic similar to other Aorus branded models. There is a single full-length PCIe 3.0 x16 slot, as well as two memory slots with support for DDR4-5000 and a maximum memory capacity 64 GB. For cooling there are four 4-pin headers with one for the CPU and three for system fans. And users looking to tap into Intel's integrated UHD graphics can do so via two video outputs on the rear panel, where GIGABYTE offers and HDMI 2.0 port as well as a DisplayPort 1.4 output. Storage is pretty standard for a mini-ITX model in this day and age with two PCIe 3.0 x4 M.2 slots and four SATA ports with support for RAID 0, 1, 5, and 10 arrays.

The GIGABYTE Z490I Aorus Ultra follows a consistent and subtle design which is based on a black PCB with a black rear panel cover and black power delivery heatsinks. This aesthetic extends to the black and silver mono-tone chipset heatsink, which also doubles up as an M.2 heatsink. At the right-hand side of the board is an ARGB LED strip which sits on the rear of the board and creates an underglow effect. Users looking to add more RGB LEDs can use the ARGB and RGB header pairing. 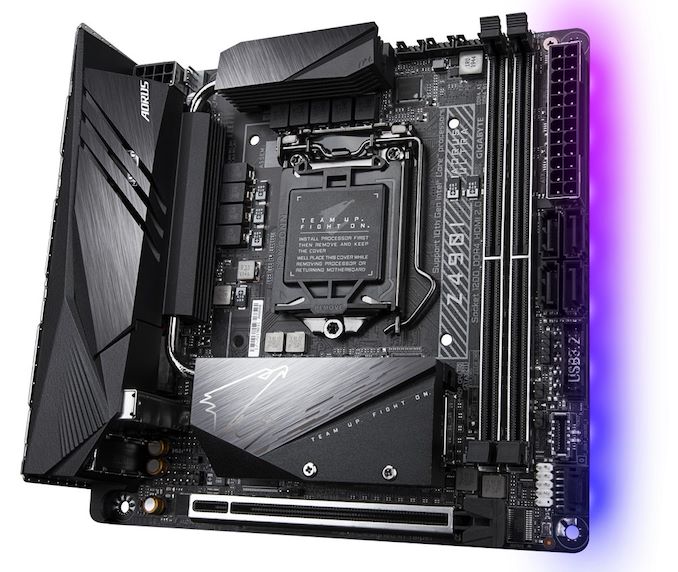 Towards the lower portion of the motherboard (just above the single full-length PCIe 3.0 x16 slot) is the chipset heatsink, which is designed to accommodate the front-mounted M.2 slot. The second PCIe 3.0 x4 M.2 slot is located on the rear of the PCB. Both of the M.2 slots do include support for SATA drives, with four additional SATA ports with support for RAID 0, 1, 5, and 10 arrays. On the right-hand side is a USB 3.2 G1 front panel header which adds two ports, a single USB 2.0 header which also adds two ports, with a single USB 3.2 G1 Type-C header. Also on the right-hand side is a pair of steel reinforced memory slots, which feature support for DDR4-5000 memory speeds and a maximum capacity of up to 64 GB.

To save what little remnants of space there is on a mini-ITX PCB, GIGABYTE has opted to use non-standard connectors for the three 4-pin chassis fan headers. In order to accommodate this, the company includes small extension cables in the accessories bundle, converting these headers to the usual 4-pin standard. Note however that this means that fan headers on the board are all but require the cables to function, so you'll want to take care not to lose them. Otherwise, the 4-pin CPU fan is a conventional 4-pin header and is located in the top left-hand corner of the board by the 8-pin ATX 12 V CPU power input. 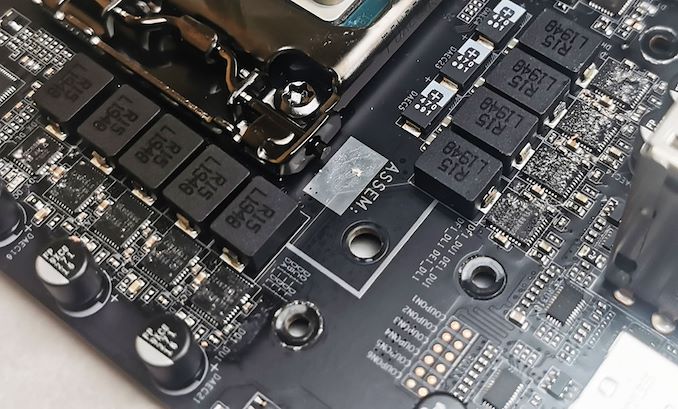 The GIGABYTE Z490I Aorus Ultra is using a large 9-phase power delivery system, which is operating in an 8+1 configuration. The PWM controller of choice is the Intersil ISL69269. The CPU section is using eight Intersil ISL99390 90 A power stages, while the SoC is using a single ISL99390 90 A power stage. The capacitors are interesting as the GIGABYTE is using premium surface-mounted Tantalum Polymer capacitors, which certainly adds cost to the board. So does the 10-layer PCB which puts it on a similar footing to the MSI Z490I Unify. 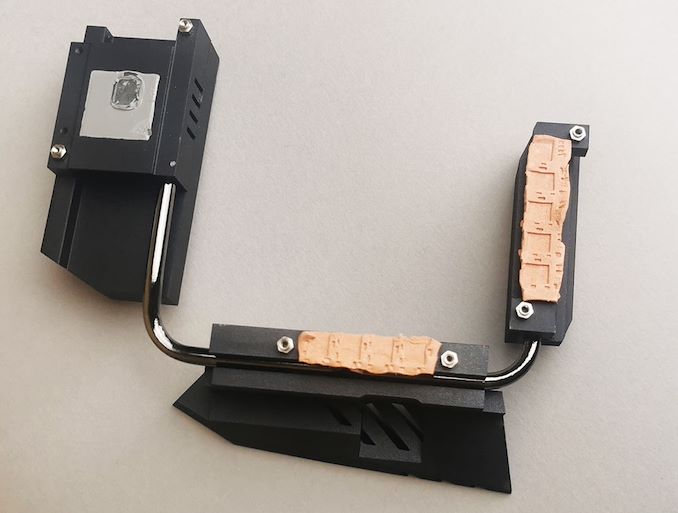 Cooling the key components, including the power delivery system, the front-mounted PCIe 3.0 x4 M.2 slot, and the chipset, is a trifecta of heatpipe-connected heatsinks. The design of this moulds into the metallic rear panel cover and stretches around the board in a C-shape. The PCIe 3.0 x4 M.2 heatsink slots within the chipset heatsink and can be accessed by screws on the top plate making access to this slot easy with a screwdriver. There are profound imprints within the thermal pads which show that the connection between the heatsink and the power stages is nice and tight. 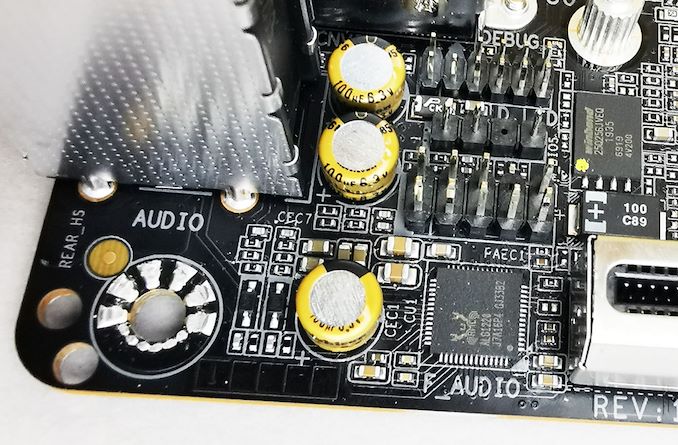 Due to space constraints on mini-ITX motherboards, the audio section of the board is very cramped with GIGABYTE utilizing every bit of spare PCB space. The Realtek ALC1220-VB HD audio codec is supplemented by three Japanese gold audio capacitors, with no PCB audio separation from the rest of the board. The HD audio codec doesn't include an EMI shield, and just above this is a front panel audio connector.

On the rear panel is plenty of USB connectivity which is spearheaded by a pair of USB 3.2 G2 ports including one Type-C and one Type-A. There is also four USB 3.2 G2 Type-A and two USB 2.0 ports, with  DisplayPort 1.4 and HDMI 2.0 video outputs. GIGABYTE has also included a Parade PS175 chip, which allows for the DisplayPort to carry HDMI 2.0 video when used with an appropriate adapter. The three 3.5 mm audio jacks are powered by the Realtek ALC1220-VB HD audio codec. At the same time, the boards networking includes an Intel I225-V 2.5 GbE Ethernet controller and an equally premium Intel AX201 Wi-Fi 6 wireless interface. Finishing off the rear panel is a small, yet handily located Q-Flash Plus button which includes a dedicated USB 3.2 G1 Type-A port to update the firmware easily.