The Acer Nitro 5 Review: Renoir And Turing On A Budget

AMD’s Renoir platform has been a game-changer in the laptop space for the Santa Clara company. With the previous laptop platform, Picasso, AMD offered competitive,, but not class-leading performance, especially on their integrated GPU, but were let down by high platform power draw, which was a major hurdle to overcome in a battery-powered device. Also, Picasso featured the AMD Zen CPU cores, whereas AMD’s desktop platform had moved to Zen 2. With the introduction of the AMD 4000 series laptop platform known as Renoir, AMD really delivered a triple-punch, moving to their newest 7 nm Zen 2 cores, as well as addressing their high idle power draw, and offering up to eight cores and sixteen threads in both their U-Series 15-Watt designs, and H / HS series 45-Watt / 35-Watt laptop processors. AMD went from “competitive, but” to class-leading overnight.

For a full deep-dive into the AMD 4000 platform, please check out Ian’s launch-day review featuring the AMD Ryzen 9 4900HS. 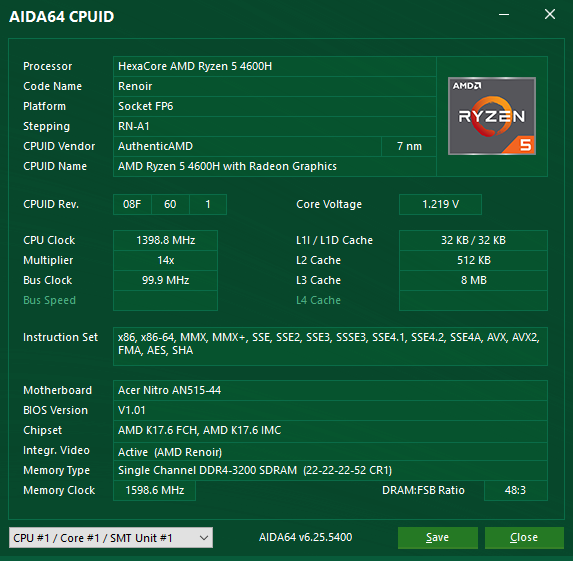 Moving back to the Acer Nitro 5, Acer is offering two Renoir-based options, with the entry-level design featuring an AMD Ryzen 5 4600H, and the upgraded model moving to the Ryzen 7 4800H. Both are nominal 45-Watt TDP parts, with the Ryzen 5 offering six cores and twelve threads, from 3.0 to 4.0 GHz. The 4800H offers eight cores and sixteen threads, from 2.9 to 4.2 GHz. In our Ryzen 5 powered review unit, the processor is paired with 8 GB of DDR4 RAM in a single-channel configuration, which will somewhat impact CPU performance, but offers the owner an easier, less expensive option to upgrade to 16 GB in the future.

To see how the Acer Nitro 5 performs, it was run through our laptop benchmark suite. To compare the results to any device we have tested, please use our online Bench. As an interesting comparison we have included the ASUS ROG Zephyrus M15, powered by a six-core i7-10750H, with the same TDP and core count as the AMD Ryzen 5 4600H in the Acer Nitro 5, as well as the eight-core Ryzen 7 4700U powered Acer Swift 3, and some quad-core Ice Lake platforms with and without dedicated graphics. The comparison systems are not based on price – the Acer Nitro 5 is easily the most inexpensive device here with a dGPU – but on platforms, so please keep that in mind. Where possible, the ASUS Zephyrus G14, which was the launch platform for the Ryzen 4000 series, is also included, however Ian’s CPU testing suite does not perfectly match the Laptop suite, so data is not available for all tests. 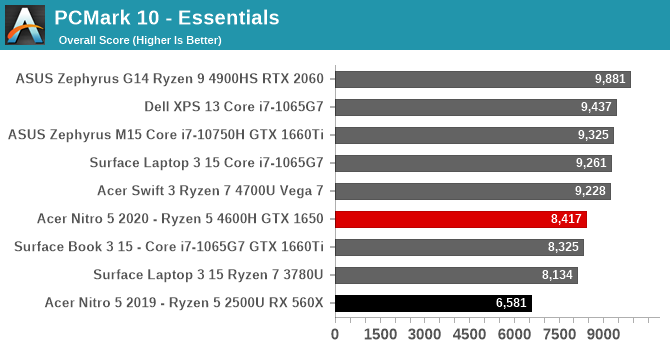 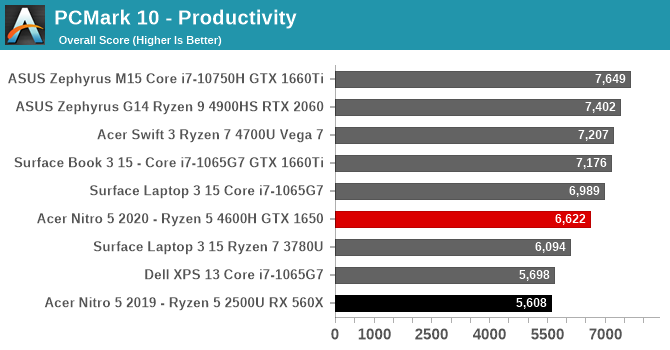 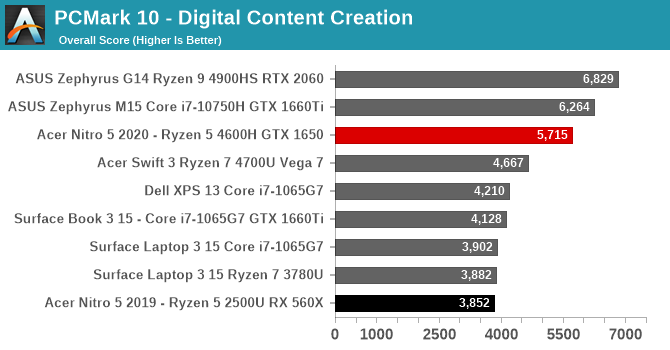 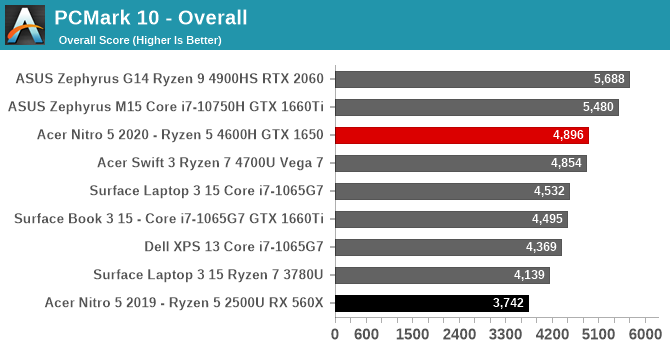 Offering a range of sub-tests, UL’s PCMark 10 simulates real-world tasks for office productivity, digital content creation, and typical tasks a home-user may do such as web and video chats. The Acer Nitro 5 does very well here, although it can not quite match the 8-core Ryzen 7 4700U in many of the tests. The included GTX 1650 does propel it ahead in content creation, however. The ASUS M17, with a 5.0 GHz maximum frequency, does edge the Ryzen 5 4600H, and the large GTX 1660 Ti GPU also helps. However the ASUS Zephyrus G14 with the “35-Watt” Ryzen 9 4900HS and RTX 2060 is able to outshine the rest of the systems. 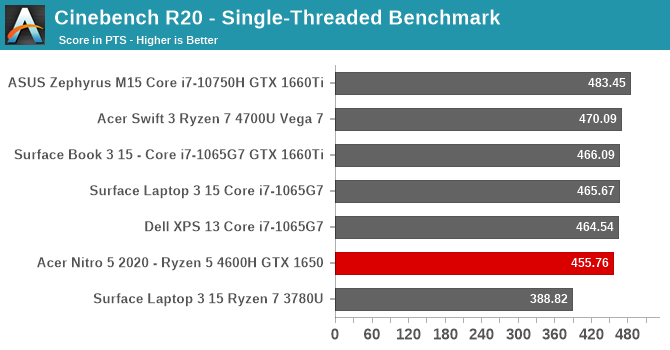 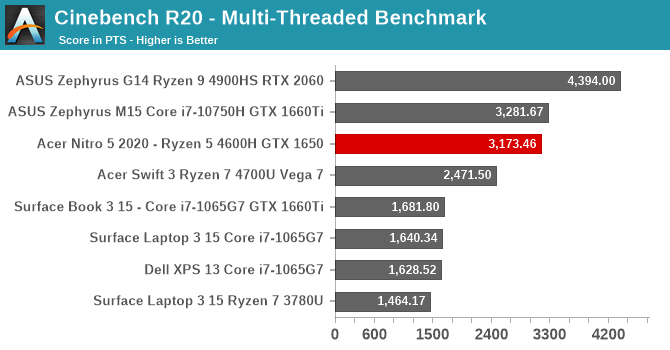 Cinebench is a pure compute workload, testing a CPU’s execution resources without much else getting in the way, like memory. It favors fast frequencies, high IPC, and more cores on the multi-threaded version of the test. The slightly lower boost frequency of the Ryzen 5 4600H, peaking at only 4.0 GHz, holds the system back on the single-threaded results, but with six cores and twelve total threads, the Ryzen 5 competes well with the Core i7-10750H, and stretches its legs on the U-Series processors. The Ryzen 9 4900HS, with 8 cores, 16 threads, and a 4.3 GHz maximum turbo, easily outclasses other processors here. 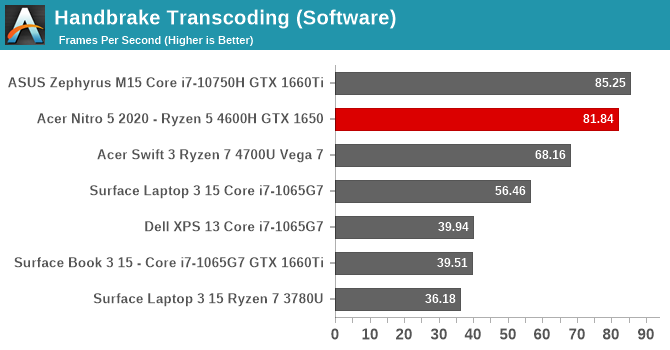 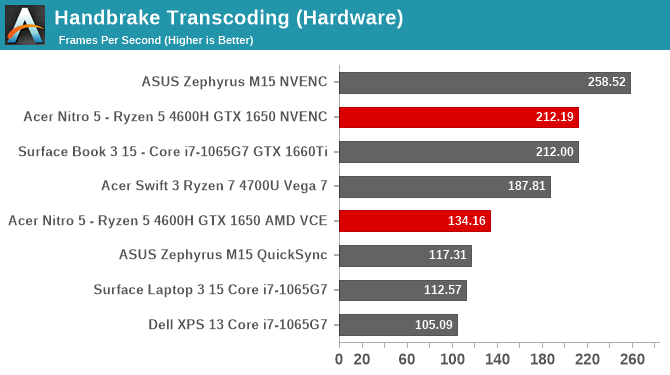 The newly added Handbrake benchmark leverages the CPU, integrated GPU, and discrete GPU if available to transcode video using likely the most popular transcoding tool around. As a much longer test, the TDP plays more of a factor here than on some of the previous results, and the Acer Nitro 5 does very well on this assessment. On pure CPU encoding, the Zen 2 cores can almost keep up with the much higher frequency Core i7-10750H. When using the integrated GPU built into Ryzen, performance is good, although not quite matching the Ryzen 7 4700U we tested in the Acer Swift 3, which despite the smaller TPD, offers a slightly larger iGPU. The GeForce GTX 1650 is faster again, if you need to transcode video in a hurry. Generally, the dedicated media blocks perform the job quicker, but not necessarily with the same quality as the software based encoder, which may factor into your decision on which one to leverage for a transcode job. 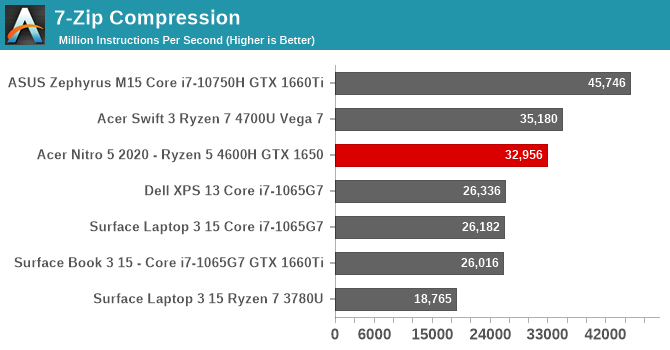 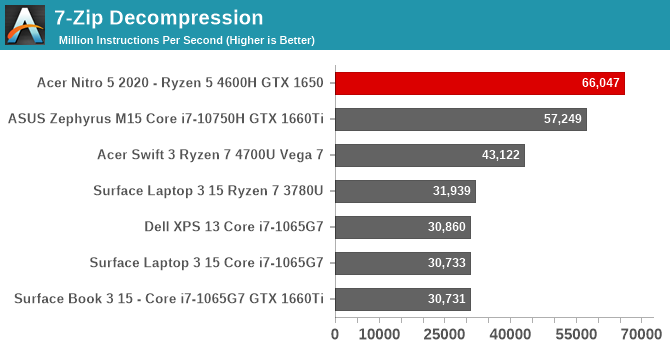 Measuring web performance is a factor of both the underlying hardware, as well as the browser, since most web workloads leverage scripting which is compiled just-in-time, so the browser plays a big factor in overall performance. To lock the systems to an even playing field, we have moved to the latest Chromium-based Microsoft Edge browser, and will be utilizing it going forward. We took the opportunity to move away from some of the older, outdated web tests, and are focusing on Speedometer 2.0, which is a DOM performance measurement from the Webkit team, and WebXPRT which is developed by Principled Technologies. 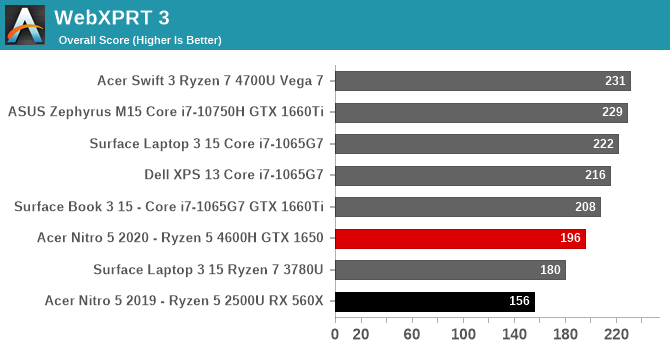 Interestingly, the 6-core, 12-thread Acer Nitro 5 was able to surpass the 8-core, 8-thread Ryzen 4700U in Speedometer, even with a small frequency deficit. WebXPRT, which really favors higher turbos and fast turbo activation, did not do as well on this system.

The Acer Nitro 5 review unit shipped with a 256 GB Western Digital SN530 drive, which is a PCIe 3.0 x4 NVMe drive. The Acer also offers an additional M.2 port, as well as a 2.5-inch SATA slot for additional expansion. As a low-cost device, the 256 GB drive is small, but adequate when you consider the rest of the internals, and expansion is possible, either via internal drives, or of course USB-based storage to hold a gaming library.

The PCMark 10 storage test uses traces of actual workloads to provide an overall resulting score, and is more useful than a straight up bandwidth test of the drive.

The drive itself, despite being installed in a low-cost device, holds up well against other devices we have tested that cost much more. A larger drive in a gaming system would be nice, due to the massive size of game installs in 2020, but a 256 GB system drive is still welcome since it is pure NVMe SSD.