A long long time ago, the PC's parallel port was designed for the purpose of connecting printers. If only it had been named the "printer port" to remind people of its purpose, maybe we wouldn't have seemingly every external device on a PC vying for that single parallel port - Zip drives, tape backups, scanners, CD-ROM's, MP3 players, and even some sound cards have used the parallel port as an interface.

The original specification is barely sufficient to handle a printer these days - it was after all designed for streaming text to slow dot matrix printers for the most part. Extensions to the original specification have brought about the faster "enhanced" parallel port (EPP) and "enhanced communications" port (ECP) standards. But if you're ever tried to copy a bunch of files from a parallel port Zip drive, you know what happens - really slow transfers, around 300 kB/s if you're lucky (the speed of a 2x CD-ROM) with massive CPU utilization (usually near 100%). And don't forget the issues with the printer pass throughs.

In the past, the only other option for external devices was SCSI, which was definitely fast, but also much more expensive and complicated. Fortunately today there's USB, which should eventually replace the legacy parallel (and serial) ports that have been around forever. However, even USB is just 12 megabits/s (which translates to 1.5 megabytes/s), which is a bit slow for some devices, most notably hard drives and fast CD-ROM's.

Promise decided there had to be a better way. They took note of the fact that the most common hard drives and CD-ROM's were all IDE - after all, every motherboard in recent memory has built-in IDE support. So they designed a case that would hold an IDE device, included a custom ISA IDE card, and named it the Xconnect. 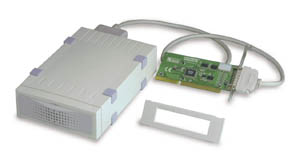 The case is plastic and secured by two screws to a metal frame. On the back, there's a 50-pin centronics connector, two RCA jacks, a fan exhaust, and a power switch. The card features an external 50-pin high density SCSI connector for connection to the outside world. A standard power connector from the PC power supply plugs into the card and power is carried over the 50-pin cable to the device.

Unfortunately, the solution is not exactly ideal. The card takes up a valuable slot, while the ISA interface limits transfer rates to about 5 megabytes/s - faster than USB or parallel, but still fairly slow for a hard drive. ISA also means high CPU utilization compared to a PCI bus mastering solution (like that featured on current motherboards). Finally, since the custom ISA IDE card must be used for the interface, the external device will not be portable to other machines unless they also happen to have this same kit installed.

So who should buy the Xconnect? Basically, if you are out of drive bays and simply cannot get rid of any current devices, then this may be a good solution for a relatively low speed device. Of course, at about $70 for the Xconnect, it may just be more effective to buy a new case. Maybe if you plan to install the kit in multiple computers so that devices can be moved around. In both situations, the Xconnect is more appealing if you don't have USB or you already have the device in IDE form and are not purchasing something new. Otherwise, just stick to USB for Zip drives, CD-ROM's, tape backups, etc. and leave your hard drives inside your computer.