Above the GTX 480 is of course the “full” GF100 with all of its functional units enabled, and which is still missing in action on both the consumer and HPC markets. However there’s also room for a card below the $350 GTX 470, particularly with AMD being the sole inhabitant of the “bargain” high-end $300 point. NVIDIA is to the point in the Fermi rollout where they want a piece of that market, and they have a stash of further-binned so-so GF100 chips they want to fill it with. This brings us to today, and the launch of the GeForce GTX 465.

In a nutshell, if you take a GTX 470 and disable some additional functional units, additional memory controllers, and additional ROPs, while turning down the memory speed any further, you get the GTX 465. NVIDIA has shut off another 3 Streaming Multiprocessors (SMs) from GF100, leaving the GTX 465 with 11 of them, giving it a total of 352 CUDA Cores/SPs, and 44 texture units. Meanwhile the ROPs have been cut down to 32 ROPs, and another memory controller disabled, making for a 256-bit memory bus attached to 1GB of 802MHz (3208MHz effective) GDDR5. All told the GTX 465 has around 78% of the texture/shader power of the GTX 470, 80% the ROP power, 76% of the memory bandwidth of the GTX 470, and 80% of the memory capacity. The loss of 256MB of RAM will be particularly interesting, as it means NVIDIA has surrendered its memory capacity advantage over AMD’s reference cards – both are even at 1GB. 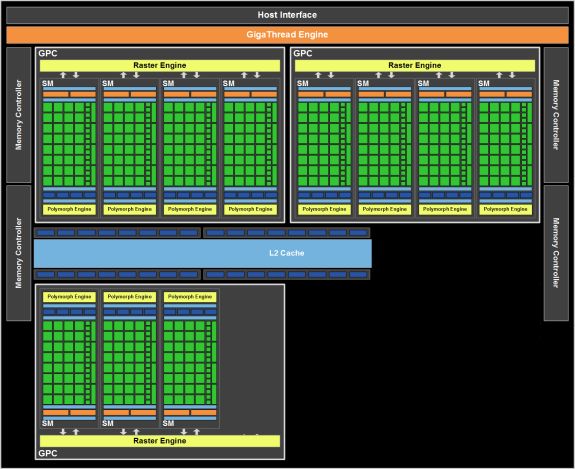 With all of that in mind, compared to the GTX 470 the GTX 465 may be the more interesting card. While NVIDIA simply disabled some additional functional units compared to the GTX 480 to get the GTX 470, disabling even more functional units required a different strategy. Rather than disabling additional units from each of the GF100 GPU’s 4 Graphics Processing Clusters (GPCs), NVIDIA outright disabled one of the GPCs. This is the first time we’ve seen them disable a GPC on a GF100 card, making it an interesting first for Fermi. By disabling a GPC, not only does NVIDIA surrender CUDA cores, texture units, and polymorph engines, but they also surrender one of the 4 raster engines. As a result the GTX 465 takes a straight 25% hit in rasterization abilities compared to GTX 470, slightly greater than the loss for any other part of the GTX 465. 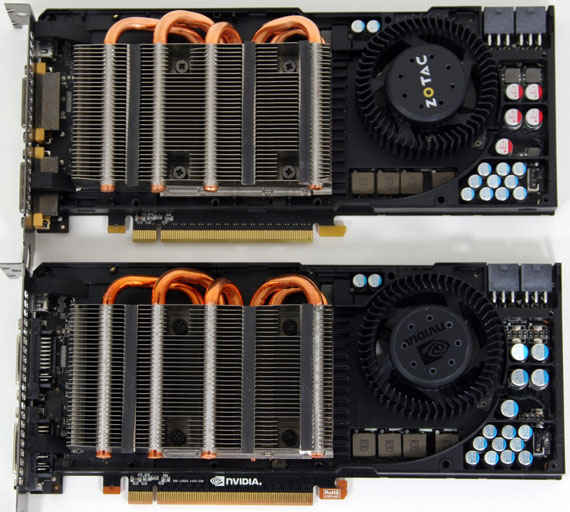 Along with similar clockspeeds as the GTX 470, the GTX 465 also shares the GTX 470’s design. It’s the same PCB and cooler – only the GPU has changed, with NVIDIA’s partners laying down one of NVIDIA’s GTX 465-binned GF100 GPUs.

With the disabling of additional functional units, the TDP has come down compared to the GTX 470. NVIDIA pegs the GTX 465 at 200W TDP, 15W below the GTX 470’s official TDP. We were not given the idle power consumption; however we’ll see quickly that it hasn’t improved when looking at our own power consumption numbers.

As we stated earlier, this is NVIDIA’s shot at the sub-$300 market, which is currently dominated by the Radeon HD 5850 at $289 and up, and the Radeon HD 5830 at $225 and up. Like the GTX 470, NVIDIA has built a product to slot in between AMD’s cards in terms of performance rather than taking AMD head-on, and the pricing reflects this. The MSRP of the GTX 465 is $279 accordingly, maintaining AMD and NVIDIA’s more-or-less neat division of the high-end market and putting the performance “sweet spot” for the GTX 465's performance at roughly 93% of the 5850.

Meanwhile this is the closest the two have come on pricing in quite some time, as a $279 MSRP puts the GTX 465 within $10 of the cheapest Radeon HD 5850. The pricing on the GTX 465 may change in the next month as NVIDIA’s North American partners are currently packing in Just Cause 2 with the card (a last-minute deal as we understand it), so there may be some flexibility on pricing once that promotion ends and NVIDIA’s partners no longer have to chip in for the game.

Finally, this is a hard launch, a very hard launch. In fact the cards started showing up on etailers 2 days before our NDA expired. After the farce that was the GTX 480/470 launch, it’s fantastic to see a proper hard launch. As far as we can tell you won’t have any problem finding a GTX 465 – thanks in large part to what looks to be quite the stockpile of GF100 GPUs that only meet GTX 465 specifications.