One thing that’s pretty clear from HTC’s history is that they know how to make some pretty great smartphone keyboards. The Touch Pro 2, the original Tilt/TyTN II, the old school T-Mobile MDA, etc. - they all have excellent keyboards, and the G2 is no exception. In fact, the G2’s slide-out keyboard is pretty similar in both look and feel to the Touch Pro 2 keyboard, and that’s not a bad thing. The keyboard has very tactile feel, positive feedback for key presses, good spacing and layout, and even some shortcut keys that can be programmed to launch apps. Coming off the iPhone’s admittedly great virtual keyboard, I had zero trouble adjusting to the G2’s keyboard. Simply slide it open, start typing. That’s it. (I will say that the spacing is awful if you’re playing Quake 3, since you can’t use three separate fingers for the WASD keys, but that’s a different story and a problem with smartphone gaming in general.) 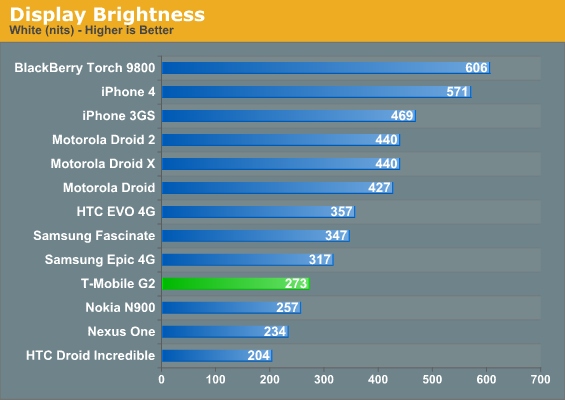 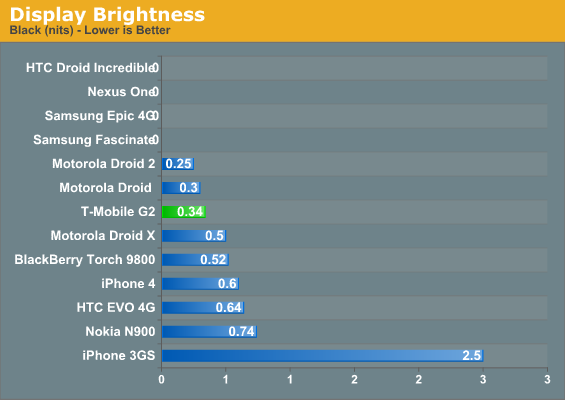 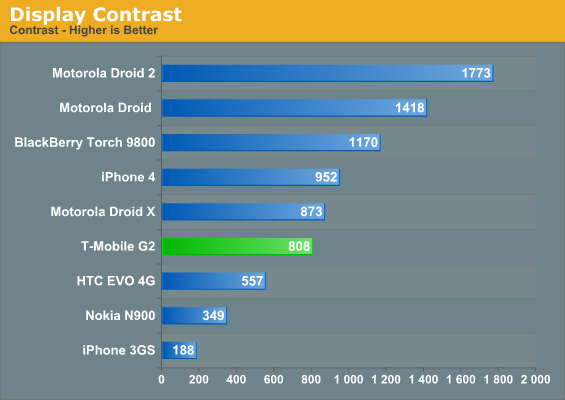 The display is the same resolution and size as those as on the Nexus One, Desire, and Incredible - 3.7” 800 x 480 - but is based on a different technology, Super LCD TFT. After the Samsung AMOLED shortages over the summer, HTC seems to have migrated over to the more commonly available Sony S-LCD panels on all of its 3.7” devices. I’m a fan of 3.7” screens, they strike a nice balance between the somewhat cramped 3.5” iPhone and the massive 4” Vibrants and 4.3” EVO’s of the world. The contrast ratio of just over 800 is significantly higher than HTC’s previous LCD screens (EVO 4G and HD2), and is fairly competitive with the iPhone 4 and Droid X, though the Droid and Droid 2 IPS panels are far, far higher. Overall the screen looks pretty good, though the max brightness of 273 nits is fairly low by superphone standards. You’ll get more in-depth analysis on the display in the full review, but I’ll leave you with this: unless you’re coming off an iPhone 4 or you enjoy blinding yourself every time you look at your cellphone screen, you shouldn’t have too many complaints with the G2’s screen.

The camera is a 5MP unit with autofocus and an LED flash, and it does fairly good work. I was pretty impressed by the flash, finding it better than even the EVO’s blinding flash. The dedicated camera button is nice to have, but even nicer than that are the camera settings. Like I mentioned, I’m mostly used to the iPhone, so having any kind of option is pretty new. You can change the white balance and exposure to suit the lighting conditions, turn the flash on and off, and mess with the focus and zoom (up to 2.0x). As you can see from the sample shots, the G2 is pretty solid by smartphone standards. It won’t wow you like some of the iPhone 4 HDR photos will, and it definitely will not come close to replacing a real camera, but for quick snaps, the G2’s camera should be serviceable enough when the pictures are scaled down to web size.

The video camera is pretty cool. It shoots video up to 720p and features a myriad of options, including flash on/off, the same white balance options as the still camera, and four filters (black and white, sepia, negative, and solarize). The mic is pretty bad, and it has some issues with high motion action and settings where the lighting changes rapidly, but it will replace a Flip video camera pretty easily.