Two months ago I looked at the world’s first 3TB desktop hard drive. It was a 5 platter, 3TB Seagate Barracuda XT inside an external GoFlex Desk chassis. The performance of the drive wasn’t anything out of the ordinary, but the poorly ventilated chassis seemed ill equipped to deal with the thermal load a 5-platter, 7200RPM 3TB drive would throw at it. I wasn’t terribly pleased and I wondered if Western Digital’s external enclosure might be better suited for heat dissipation. WD’s 3.5” external drives fall under the My Book brand and they have visibly more ventilation than the GoFlex Desk I reviewed.

As luck would have it, last week Western Digital announced its own 3TB external drive: the My Book Essential. The Essential suffix somehow implies USB 3.0 support.

Today, Western Digital takes it one step further and announces availability of the internal drive as well. The Caviar Green line is now home to a 2.5TB and a 3.0TB model, priced at $189 and $239 respectively.

Let’s go ahead and review both shall we? 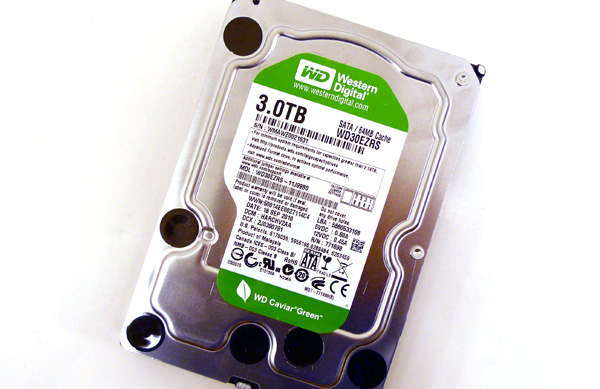 As a result the Caviar Green 3TB uses only four 750GB platters, giving this drive the highest platter density of any 3.5” hard drive.

Spindle speed is another differentiating factor between WD’s drive and the earlier Seagate offering. While the GoFlex Desk houses a 7200RPM hard drive, WD’s 3TB drive is sold under the Green label. Western Digital doesn’t disclose actual spindle speed as it isn’t consistent across all Green label drives. The 3TB specs simply list it as IntelliPower.

I asked WD for more specifics and I got a reasonable explanation. In the Green line WD optimizes for power consumption. It attempts to make all drives consume roughly the same amount of max power, which happens to be 3 - 5W below a typical 7200RPM drive. The spindle speed isn’t dynamic, it’s set at manufacturing and remains at that.

All green drives will spin below 6000 RPM and the spec never drops below 5400RPM. What this means is that all 2.5TB drives will spin at one speed while all 3TB drives may spin at another, both between that 5400 RPM to 6000 RPM range.

Like many modern drives, the 3TB Caviar Green uses 4KB sectors internally however it emulates 512-byte sectors for compatibility reasons.

Where the 3TB Caviar Green really breaks the mold is that it is shipped with a HighPoint RocketRAID 620 PCIe SATA card. The purpose? Breaking the 2.19TB barrier of course.