I'm not sure what it is about SSD manufacturers and overly complicated product stacks. Kingston has no less than six different SSD brands in its lineup. The E Series, M Series, SSDNow V 100, SSDNow V+ 100, SSDNow V+ 100E and SSDNow V+ 180. The E and M series are just rebranded Intel drives, these use Intel's X25-E and X25-M G2 controllers respectively with Kingston logo on the enclosure. The SSDNow V 100 is an update to the SSDNow V Series drives, both of which use the JMicron JMF618 controller. Don't get this confused with the 30GB SSDNow V Series Boot Drive which actually uses a Toshiba T6UG1XBG controller, also used in the SSDNow V+. Confused yet? It gets better. 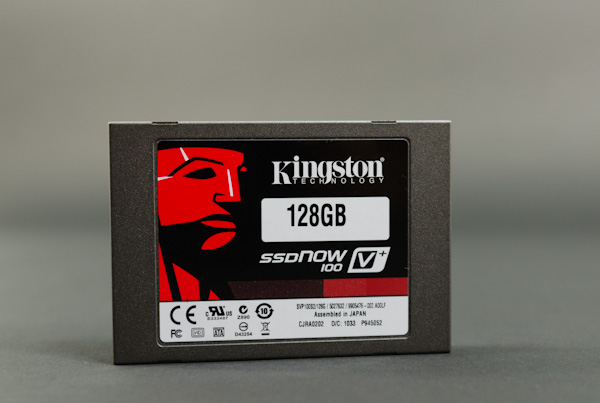 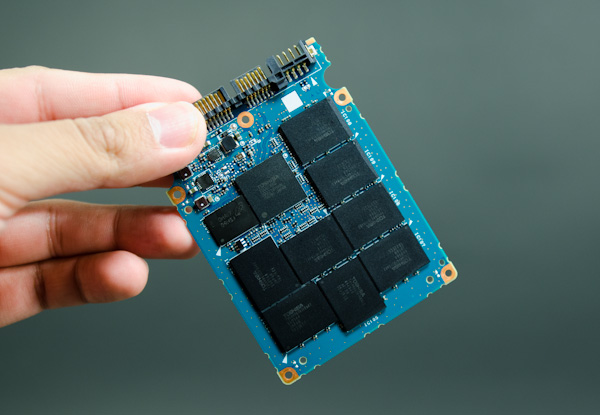 The standard V+ is gone and replaced by the new V+ 100, which is what we're here to take a look at today. This drive uses the T6UG1XBG controller but with updated firmware. The new firmware enables two things: very aggressive OS-independent garbage collection and higher overall performance. The former is very important as this is the same controller used in Apple's new MacBook Air. In fact, the performance of the Kingston V+100 drive mimics that of Apple's new SSDs:

Sequential speed is higher on the Kingston drive but that is likely due to the size difference. Random read/write speed are nearly identical. And there's one phrase in Kingston's press release that sums up why Apple chose this controller for its MacBook Air: "always-on garbage collection". Remember that NAND is written to at the page level (4KB), but erased at the block level (512 pages). Unless told otherwise, SSDs try to retain data as long as possible because to erase a block of NAND usually means erasing a bunch of valid as well as invalid data and then re-writing the valid data again to a new block. Garbage collection is the process by which a block of NAND is cleaned for future writes.

If you're too lax with your garbage collection algorithm then write speed will eventually suffer. Each write will eventually have a large penalty associated with it, driving write latency up and throughput down. Too aggressive with garbage collection and drive lifespan suffers. NAND can only be written/erased a finite number of times, aggressively cleaning NAND before it's absolutely necessary will keep write performance high at the expense of wearing out NAND quicker.

Intel was the first to really show us what realtime garbage collection looked like. Here is a graph showing sequential write speed of Intel's X25-V: 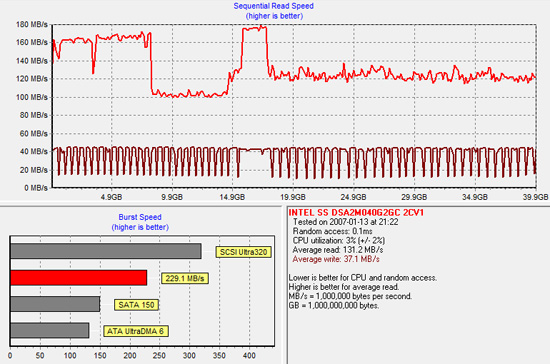 Now look at Kingston's SSDNow V+100, both before fragmentation and after: 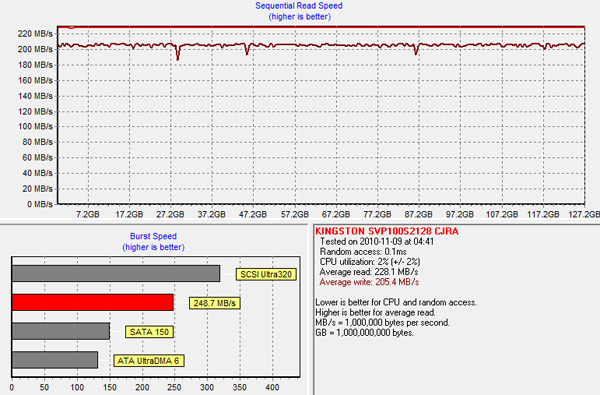 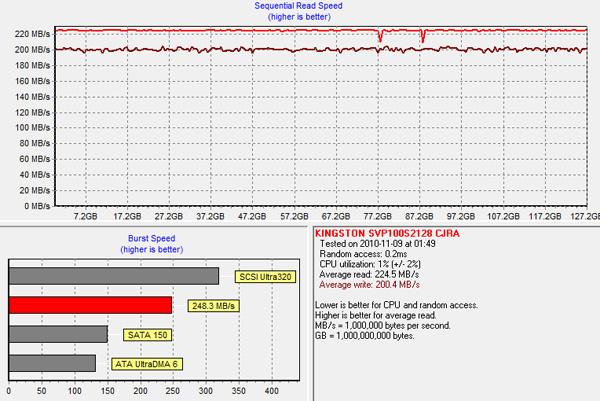 There's hardly any difference. Actually the best way to see this in work is to look at power draw when firing random write requests all over the drive. The SSDNow V+100 has wild swings in power consumption during our random write test ranging from 1.25W to 3.40W. The swings would happen several times in a window of a couple of seconds. The V+100 is aggressively tries to reorganize writes and recycle bad blocks, more aggressively than we've seen from any other SSD.

The benefit of this is you get peak performance out of the drive regardless of how much you use it, which is perfect for an OS without TRIM support - ahem, OS X. Now you can see why Apple chose this controller.

There is a downside however: write amplification. For every 4KB we randomly write to a location on the drive, the actual amount of data written is much, much greater. It's the cost of constantly cleaning/reorganizing the drive for performance. While I haven't had any 50nm, 4xnm or 3xnm NAND physically wear out on me, the V+100 is the most likely to blow through those program/erase cycles. Keep in mind that at the 3xnm node you no longer have 10,000 cycles, but closer to 5,000 before your NAND dies. On nearly all drives we've tested this isn't an issue, but I would be concerned about the V+100. Concerned enough to recommend running it with 20% free space at all times (at least). The more free space you have, the better job the controller can do wear leveling.