The two biggest announcements at CES 2011? Intel’s Sandy Bridge and pretty much everything NVIDIA talked about at its press conference (as well as the MS Windows 8/ARM announcement which I’ll discuss later).

NVIDIA finally got to talk about Project Denver as well as show off its first Tegra 2 based smartphones. The LG Optimus 2X, Motorola Atrix 4G and Droid Bionic will all be shipping in the next 2 months and all of them use NVIDIA’s Tegra 2 SoC. 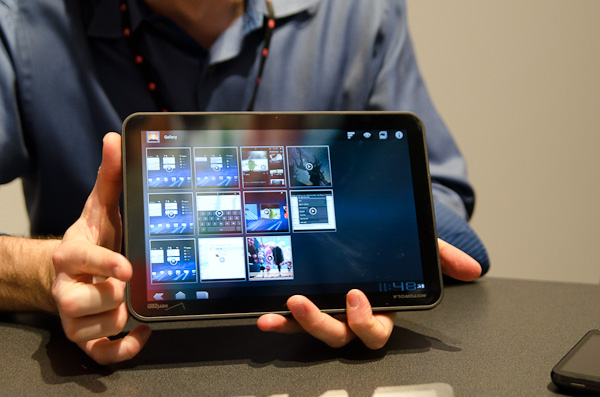 The Android tablet market is another focus for Tegra 2. A little known fact is that Tegra 2 is the reference SoC for Honeycomb, the official Android release for tablets. Being selected by Google is another huge boon for NVIDIA’s Tegra business, although from the looks of it we’ll still see more Qualcomm based Honeycomb tablets than Tegra 2 solutions by the end of the year.

I played with the Xoom a bit in my Motorola meeting. Unfortunately Google won’t allow Honeycomb to be demoed, so Motorola was just running a looped video on the Xoom. Build quality felt good despite being handled tons at the show. The Xoom is very iPad like in its size and functionality. The major physical change is the power/lock button is on the back of the device vs. the top.

The full specs of the Xoom are below:

One interesting feature is the Xoom will be upgradeable to support LTE. The PCB doesn’t have any LTE modem on it however Motorola is hinting at some sort of carrier/OEM upgrade process. Presumably you’d ship your Xoom out to either the carrier or directly to Motorola and they’d mount an LTE modem, give you an LTE SIM and you’d be on your way. The Xoom already ships with the required SIM tray, the modem is the only change you'll have to make to enable LTE.