Earlier today Verizon did what has been rumored for a while now and announced a partnership with Apple beginning with the CDMA iPhone 4.

Device pricing remains unchanged from the AT&T iPhone 4. The 16GB model retails for $199.99 while the 32GB will set you back $299.99. There is no white version available. 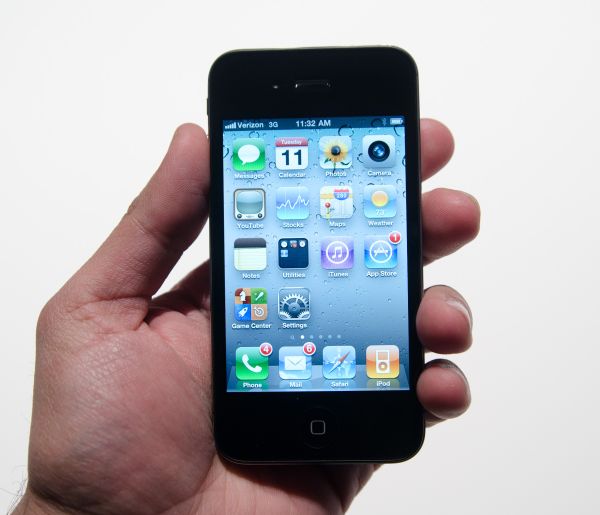 Hardware specs, both internal and external, remain unchanged. Apple is also quoting the same battery life as the AT&T version of the iPhone 4, although battery life is very dependent on signal strength so it will vary depending on network coverage where you use the phone.
Verizon isn't talking about data plan pricing and specifics at this point, although I suspect we'll find that out closer to the February 10th release date. Existing Verizon customers will be able to pre-order online beginning February 3rd, while the floodgates will open for everyone else on the 10th. Verizon insists that it has prepared both its retail presence and network for the launch, what that means for availability and likelihood of you getting a device remains to be seen. The good news is the iPhone 4 is a mature device that shouldn't be production limited. The launch will mostly be a question of whether Apple/Verizon appropriately estimated the number of customers they'll have on day 1.
Gallery: The Verizon iPhone 4
Verizon will offer a personal hotspot option for its iPhone 4, a feature that isn't available on AT&T. Apple wouldn't say if there are other architectural changes required for it, There aren't any architectural changes to enable personal hotspot, it's just something that Verizon supports and AT&T doesn't. Verizon isn't talking about pricing for enabling personal hotspot but functionally it works very similarly to tethering on the AT&T iPhone. You enable personal hotspot which you can use over Bluetooth or USB. If you have WiFi enabled you can connect up to 5 devices via WiFi to the Verizon iPhone 4.

I've got some more detail on the difference in antenna design on this new iPhone. As you can see from the pictures below, the good ol' death grip still attenuates signal strength on Verizon. Held normally I was getting a reading of -65 dBm on the Verizon iPhone, but in full on death grip the signal strength dropped to -83 dBm. That's in line with what we've seen on AT&T. 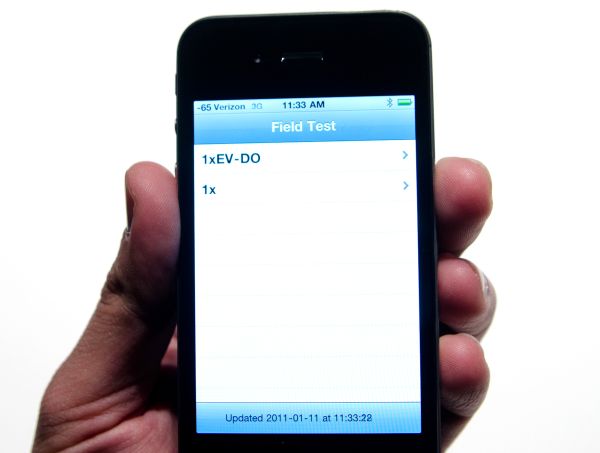 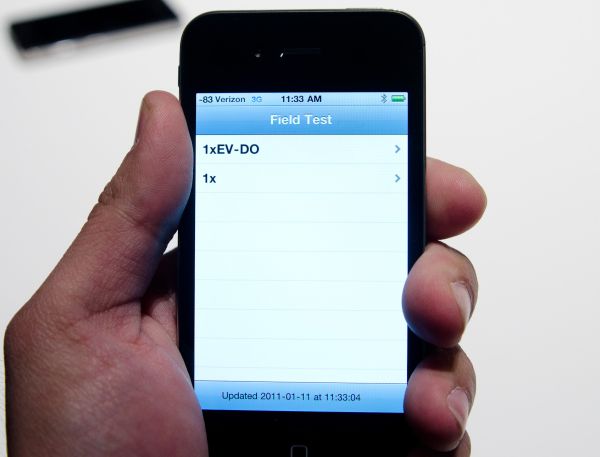 You will notice that there are more external antenna segments on the Verizon iPhone compared to the AT&T model. Specifically, there's a new strip at the very top of the phone that previously was a part of the UMTS/GSM antenna. With the Verizon iPhone 4 that strip is actually for a secondary receive antenna. This dual-receive antenna architecture is something that Verizon refers to as antenna diversity and it's a part of Verizon's spec for devices on its network. This is not something that's present on the GSM version of the iPhone 4. 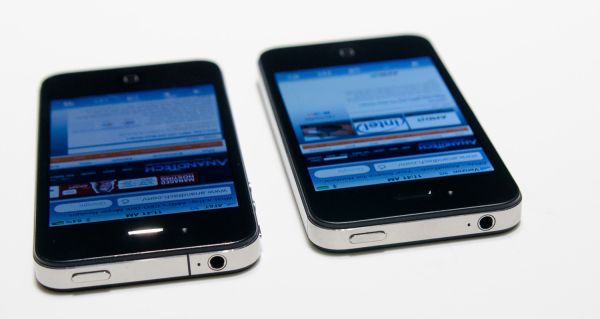 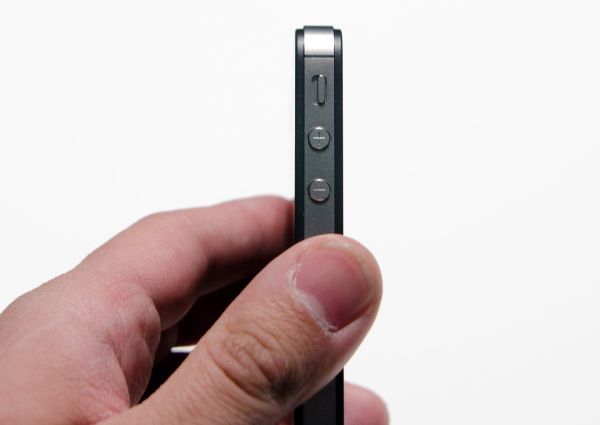 It's too early to tell if receive antenna diversity will mitigate the hand holding problems that drop calls in low signal scenarios. We will have to do extensive testing before we can figure that part out.

As far as network performance goes, AT&T's signal is strong but performance isn't very good at the Lincoln Center where Verizon held today's press event. To showcase network performance we have a couple of options. First up is a web page load test. I loaded three pages: AnandTech.com, our Dirk Meyer article and the CPU section on the site. The video below shows the latter two in action (AT&T on the left, Verizon on the right):
Again I have to mention that AT&T's performance at the Lincoln Center in NYC is pretty bad, definitely worse than it is at my office in Raleigh, NC. This is ultimately what will determine whether you go with the Verizon or AT&T versions of the iPhone 4 - what the network coverage looks like in your area.
Apple didn't have any installations of the Speedtest app, so we had to resort to using testmy.net. I ran three times on both the upload and download, I've reported the results below:

Download speed is suspiciously good. At 2.2Mbps it's higher than I have seen AT&T's iPhone 4 hit anywhere in NYC and the highest download speed I've ever seen for a device on Verizon that I've tested. Verizon likely has a local femtocell here to guarantee the best performance possible.

Upload speed is significantly worse however at only 321Kb/s on average. This is pretty typical for EVDO devices.
We'll have to wait until we get devices in hand before we can truly characterize network performance on the new Verizon iPhone 4. The numbers above are only a small snapshot of behavior.
As I mentioned in our earlier coverage, you can't use data and voice at the same time on the Verizon iPhone 4 (unless the data is over WiFi). If you are in the middle of a call and try to load a web page you'll get an error telling you that data is not available. 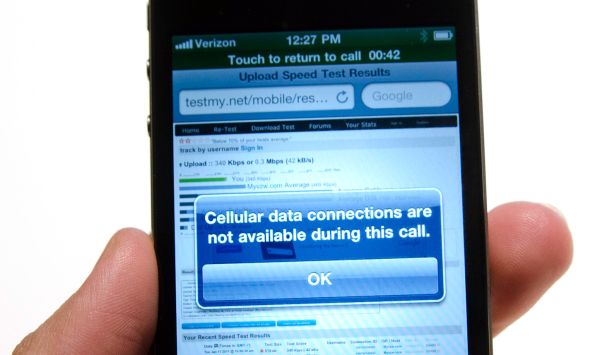 You'll notice that the 3G marker goes away during a call as well (because the call doesn't technically use the 3G radio). It doesn't disappear when you're sending an SMS however.
And there you have it. We'll be publishing a full review as soon as we can get our hands on a sample.
Tweet
PRINT THIS ARTICLE
POST A COMMENT