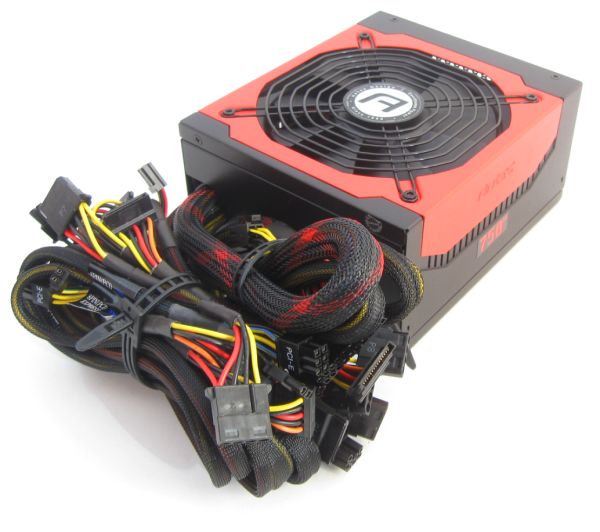 The cable sleeving for the 24-pin connector looks exactly like the sleeving from the EarthWatts Green 380W; the other cables use cheaper sleeving, but it's still better than nothing. The HCG-750 comes with a large selection of fixed cables, so again you'll want to make sure that your case has enough space you don't obstruct the airflow. If you're planning on running heavy benchmarking and/or overclocking without a case, obviously that's not a problem.

Holy moly! This is what I call a very long CPU cable. In addition the HCG-750 has nine SATA connectors. Four separate PCIe cables would have been nice, but four 8-pin capable connectors on two cables is still more than enough to support dual-GPU SLI or CrossFire systems. If you happen to run a high-end card like the HD 6970 or GTX 580, each GPU requires two connectors so gamers will definitely want at least four PCIe connectors. Note that we wouldn't recommend trying to run quad-SLI or quad-CrossFire using GTX 590 or HD 6990 off a single 750W PSU, considering we can already hit 500-600W with a single GPU at stock clocks.