The last couple of weeks after the recent GeForce GTX 550 Ti launch have been more eventful than I had initially been expecting. As you may recall the GTX 550 Ti launched at $150, a price tag too high for its sub-6850 performance. I’m not sure in what order things happened – whether it was a price change or a competitive card that came first – but GTX 550 Ti prices have finally come down for some of the cards. The average price of the cheaper cards is now around $130, a more fitting price given the card’s performance.

The timing for this leads into today’s launch. AMD is launching a new card, the Radeon HD 6790, at that same $150 price point. Based on the same Barts GPU that powers the Radeon HD 6800 series, this is AMD’s customary 3rd tier product that we’ve come to expect after the 4830 and 5830. As we’ll see NVIDIA had good reason to drop the price on the GTX 550 if they didn’t already, but at the same time AMD must still deal with the rest of the competition: NVIDIA’s GTX 460 lineup, and of course AMD itself. So just how well does the 6790 stack up in the crowded $150 price segment? Let’s find out.

3rd tier products didn’t get a great reputation last year. AMD and NVIDIA both launched such products based on their high-end GPUs – Cypress and GF100 respectively – and the resulting Radeon HD 5830 and GeForce GTX 465 were eventually eclipsed by the GeForce GTX 460 that was cooler, quieter, and better performing at the same if not lower price. The problem with 3rd tier products is that they’re difficult to balance; 1st tier products are fully enabled parts that are the performance kings, and 2nd tier products are the budget minded parts that trade some performance for lower power consumption and all that follows.

While 2nd tier products are largely composed of salvaged GPUs that couldn’t make it as a 1st tier product, the lower power requirements and prices make the resulting video card a solid product. But where do 3rd tier products come from? It’s everything that couldn’t pass muster as a 2nd tier product – more damaged units functional units that won’t operate at lower voltages like a 2nd tier product. The GTX 465 and Radeon HD 5830 embodied this with power consumption of a 1st tier card and the performance of a last generation card, which made them difficult to recommend. This does not mean that a 3rd tier card can’t be good – the Radeon HD 4830 and GTX 260 C216 were fairly well received – but it’s a difficult hurdle to overcome.

From the 5830 we learned that losing the ROPs hurts far more than the SPs, and we’re expecting much of the same here; total pixel pushing power is halved, and MSAA performance also takes a dive in this situation. Overall the 6790 has 90% of the shading/texturing, 54% of the ROP capacity, half the L2 cache, and 105% of the memory bandwidth of the 6850. Or to compare it to the 5770, it has 98% of the shading/texturing capacity, 98% of the ROP capacity, and 175% of the memory bandwidth, not accounting for the architectural differences between Barts and Juniper.

Further extending the 5830 comparison, as with the 5830 AMD is leaving the design of the card in the hands of their partners. The card being sampled to the press is based on the 6870’s cooler and PCB, as the 6790’s 150W TDP is almost identical to the 151W TDP of the 6870, however like the 5830 no one will be shipping a card using this design. Instead all of AMD’s partners will be using their own in-house designs, so we’ll be seeing a variety of coolers and PCBs in use. Accordingly while we can still take a look at the performance of the card, our power, temperature, and noise data will not match any retail card – power consumption should be very close however.

At 150W AMD is skirting the requirement for 2 PCIe power sockets. Being based on a 6870 our sample uses 2 sockets and any other design using a 6870 PCB verbatim should be similar, but some cards will ship with only a single socket. This doesn’t impact the power requirements of the card – it’s roughly 150W either way – but it makes the card more compatible with lower-wattage PSUs that only come with 1 PCIe power plug. 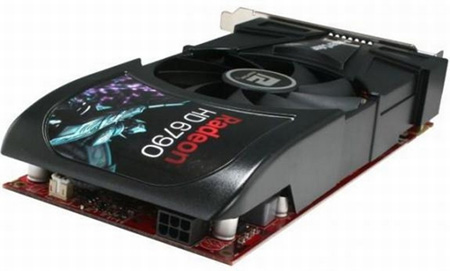 As we mentioned previously, AMD is launching the 6790 at $150. With the GTX 550’s price drop its direct competitor is no longer the GTX 550, but rather the closest competitor is now cheap GTX 460 768MB cards, which on average are about the same $150. AMD’s internal competition is the 6850, which averages closer to $160. Technically the Radeon HD 5770 is also competition, but with it going for around $110 after rebate, it’s far more value priced than the 6790 is.