To test out Windows Thin PC, I used a Dell Inspiron 640m. This rather dated laptop features a 2.0 GHz Core 2 Duo processor, 2GB of RAM, an 80GB hard drive and Intel's GMA 950 integrated graphics chip, the same one that can still be found in many low-end netbooks. It's no screaming rig, but that's not necessary for comparing Windows Thin PC to Windows 7, and I believe the laptop to be more or less representative of the sort of computer on which Windows Thin PC might find a home.

The Windows Thin PC installer is virtually identical to the regular Windows 7 installer, from the first boot screen to the last first-time setup prompt. Installation takes something like half the time that Windows 7 Ultimate does, which makes sense because there are fewer files to copy to the hard drive.

After installation is finished, you’ll be greeted with a very familiar sight: 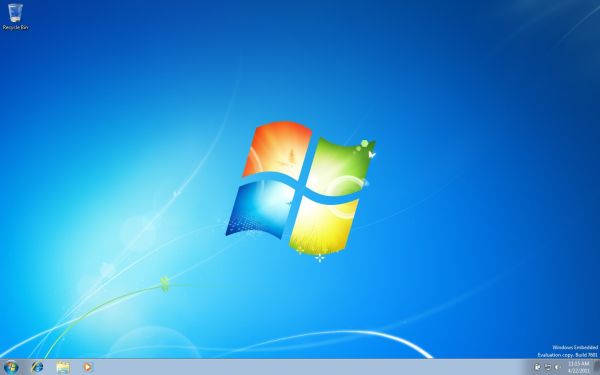 The “evaluation” text in the corner is the only thing that gives this away as anything but a stock Windows installation, at least until you click the Start button. 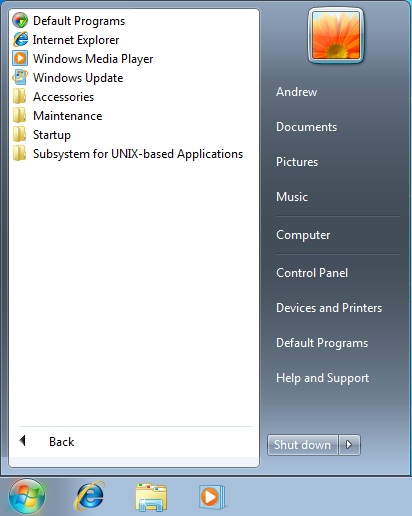 This is backed up by the dearth of installed applications – you still have Internet Explorer, Windows Media Player, the Remote Desktop client, the Windows accessibility tools, system-level stuff like the Administrative Tools (Event Viewer, Computer Management, etc.) the disk defragmenter, and old Windows 3.x standbys like Paint, Notepad, and Wordpad (though the latter three, among others, don’t appear on the Start menu by default). The bigger value-added Windows programs, though, like DVD Maker and Media Center, are completely absent, as are certain underlying technologies like the .NET Framework.

This is all done in the name of saving space, both on the disk and in memory - sitting idle at the Windows desktop with all Aero effects enabled (Aero Basic is enabled by default to save resources) Windows Thin PC used 505 MB of RAM, where Windows Ultimate installed on the same computer uses about 621 MB. This is a decent improvement, but the disk space usage comparison is much more impressive: a fresh install of Windows Ultimate uses 8.64 GB of my hard drive, where Windows Thin PC on the same computer uses just 2.7 GB of space.

This is a pretty drastic reduction in space, one that can't be achieved just by removing Media Center and other integrated programs - I dig down deeper to see where Microsoft was gaining all of these gigabytes.

The single biggest chunk of the saved space, some 3.5 GB of the 6 GB difference, is gained by disabling virtual memory and hibernation, tricks you can use on any Windows PC anywhere. By default, Windows will reserve a virtual memory pagefile (pagefile.sys) on your hard disk that equals the size of your installed RAM - on my test machine, this was 2GB, but it will dynamically shrink or grow based on your system. The hibernation file, where Windows stores the contents of RAM when it drops into its lowest power state, also changes its size based on your machine's installed RAM, though it wasn't quite a 1:1 ratio on my test machine (hiberfil.sys consumed 1.5 GB of space on my test machine).

The rest of the space is all gained by the removal of programs and system files. Several services normally included in Windows 7 - System Restore, Windows Search, and Windows Defender among them - are not just disabled but completely removed from Windows Thin PC, and with the binaries for these programs go their various hidden system folders they scatter throughout your hard drive.

Reduction in the number of background services running also saves you what little RAM that ThinPC saves over Windows 7. In addition to missing Windows Search and Windows Defender, Superfetch (the Windows Vista and Windows 7 feature that preemptively loads heavily used programs into memory to reduce load time) and the Diagnostic Service Host (the service behind all of those Windows troubleshooters) are disabled too. Trying to run a normal troubleshooter in ThinPC will throw up an error message, instead.

Back to disk space usage - Windows Thin PC also pares down your fonts folder pretty significantly - Thin PC includes just 41 fonts to Ultimate's 134, and this by itself saves around 500 MB of hard drive space. If a web page or Word document depends on a standard Windows font that isn't included in Thin PC, this can sometimes prevent these pages and documents from rendering properly.

Generally speaking, a side-by-side comparison of Windows Thin PC and Windows 7 shows that many system folders have been cut, usually by one or two-thirds - for example, the System32 folder (including subfolders) is 1.43 GB in Thin PC, but 1.92 GB in Windows 7.

So, obviously and by design, Windows Thin PC is missing quite a bit compared to a standard Windows 7 install. However, I was curious to see how Thin PC reacted to the installation of third-party programs - licensing issues aside, could Windows Thin PC serve as a very light version of Windows 7, instead of just a thin client OS?