The HD7 has the same 5MP camera/dual LED flash arrangement as the HD2, but adds 720p video recording. Again though, this is a previous generation device, so it doesn’t have the same image quality advancements that the newer HTC models have, as Brian detailed in his Thunderbolt review.

But overall, it works alright. Decent for web publishing and Facebook albums, as long as you have enough light. Low light is still basically terrible, and the flash is not very useful. As far as options go, HTC allows you to set the scene mode, after effects, metering mode, and flicker adjustment, in addition to resolution and flash modes.

I don’t get a whole lot of smartphones through here, so I don’t have a standardized test location for pictures like Brian, but I tend to take pictures of various Audis (I live next to the dealership). Also, I’d like to thank the guy that parked his Continental GT right outside my apartment building. Cue Janis Joplin—“Oh Lord, won’t you buy me a Mercedes-Benz? My neighbors drive Bentleys, I must make amends...” 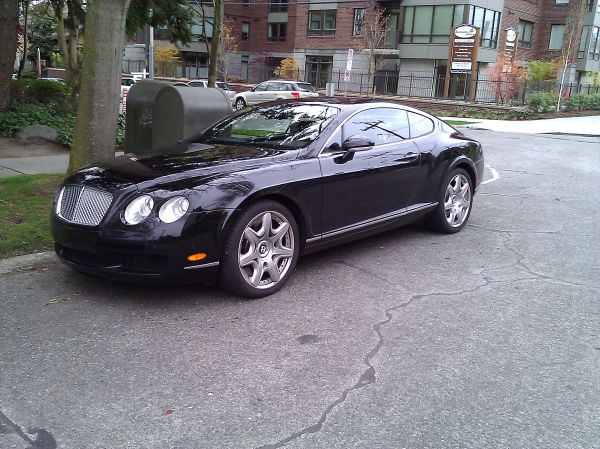 Most of the pictures turned out okay, but the ones that didn’t usually ended up not being okay either because the camera didn’t focus quickly enough, or because the picture ended up being blurry. So I shall resume my old complaint with WP7—they really need to add a software camera button. I’ve gotten more used to using the camera button in the HD7 than the one in the Venue Pro (or maybe the camera button just doesn’t suck as much), but I still end up taking 2-3 pictures at a time, because invariably, at least 35% of my pictures end up blurry.

As mentioned previously, the HD7 shoots 720p video. Unfortunately, I got the same really weird underwater-microphone effect that Brian saw with the Surround. It’s unexplainable, it almost sounds as though there’s some kind of heavy wind blowing into the mic, even on a clear day. It basically makes the video recording feature completely unusable, I don't understand how HTC hasn't fixed this yet. Also, it annoys me to no end that the camera application doesn’t default to the highest quality video recording option, you need to manually set it to 720p recording, every time.