While the SilverStone FT03 we recently reviewed required some level of instruction to assemble, the BUC doesn't come with a manual. You can download one online, but the overall design of the case is smart enough that we doubt you'll need it.

Installing the motherboard was easy enough thanks to the built-in standoffs on the tray, and there are plenty of cable routing holes surrounding it to keep the internals relatively clean. It's worth mentioning there's a decent-sized cutout in the tray for cooler backplates; hopefully at some point Intel will realize their push-pin mounting system sucks hard (I've actually seen a machine where the pins deteriorated after just a couple of years and the stock heatsink fell off), but until then it's nice to see most case manufacturers have us covered. 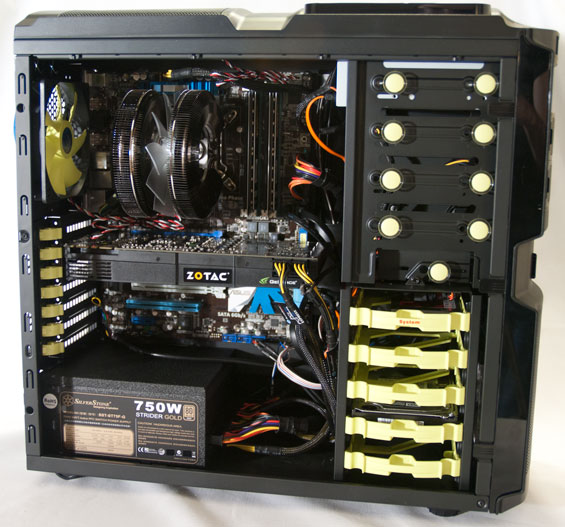 Removing the covers for the external bays is also painless as I mentioned before, though every bay below the top one has a metal piece you'll need to twist and remove. From there, pop out the fastening knobs, slide the optical drive in, then push the pins in and you're good. Again, this is a remarkably simple and sturdy system, and I never felt like the drive was anything less than completely secure. If that's not satisfactory, though, you can actually screw the drive in on the opposite side.

Unfortunately, the 3.5" drive trays aren't toolless and can be a source of some frustration. You have to squeeze the handle from the sides to loosen these trays up, but that's easier said than done and can require a remarkable amount of effort. That calls into question the usefulness of the hotswappable drive bay door, but the system does essentially work. To install a 3.5" drive, you need to first install rubber standoffs, then use special screws included with the case to mount the drive. This worked fine with a pair of Western Digital drives I tested, but an ever-so-slightly wider Seagate Barracuda just plain wouldn't fit using the side screws and had to be attached to the bottom of the tray. Once you're done it's good to go and lines up perfectly with the backplane, but the extra steps here and difficulty actually swapping drives can be a nuisance. 2.5" drives are bottom mounted in the trays with the mounting holes clearly labeled; these don't have any kind of vibration dampening, but you're expected to mount SSDs with no moving parts so it's a non-issue.

The backplane is probably one of my favorite features and a surprising inclusion in a case at this price. It basically consolidates power connections into just two plugs, and already has SATA cables built in that for the most part easily route to the ports on the motherboard. While it's necessary for any kind of hotswap functionality to even work, I was just happy it was there to make cable routing that much simpler.

Installing expansion cards with the built-in mounting system was surprisingly painless. The GTX 580 lined up and locked into place on the motherboard, and then the clamps came down and did their job. No muss, no fuss, although if you like you can also screw the card in.

Beyond hard drive and SSD installation, there were really two points that did require a bit of fuss during assembly. The first is the power supply, which essentially "snaps" into place but still didn't feel quite as clean as the other parts of the case did. I had to apply some measure of force to get it in, and from there it felt...mostly secure. In that instance I did wind up using screws to secure it in the back of the enclosure, and for those that are concerned, there's ventilation (and a removable filter) beneath the power supply. My other snag came with installing a 120mm fan in the side panel. There are vibration-dampening rubber grommets included, but these pop out relatively easily and so installation effectively requires lining up three elements instead of two: the fan, the grommets, and the screw holes. I was able to do it, but case fans almost never feel like they mount right and this was no exception. 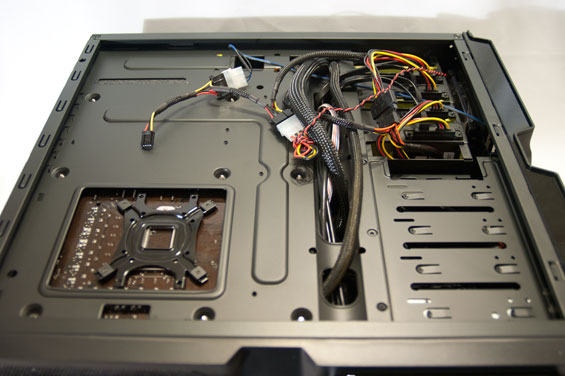 After all was said and done, my only major complaint was, surprisingly, cable routing. I had issues with this with the Antec P182 and again with the Corsair 600T, and I was hoping I wouldn't run into it here after our IN-WIN rep showed us some other models (we do have one more IN-WIN case on hand we'll be reviewing in the future) that had ample space behind the motherboard tray expressly for cabling. Getting the right-hand side panel back on proved to be an exercise in frustration and brute force, as it often tends to be with other enclosures, and my feeling is this: if you don't have enough space behind your motherboard tray for a molex connector to stand on its side, you don't have enough space. Mercifully the BUC's side panels are fairly flexible and can bow enough to handle it (unlike, say, the P182/183), but this is an issue that we shouldn't even be having at this point. I'm willing to accept a case that's a half inch wider if it means I don't have to grunt every time I put the side panel back on.