System Performance and Power Use

Starting out with the Windows Experience Index (WEI) from the 32-bit version of Windows 7 Ultimate, we can see that the E-350’s 1.6GHz CPU is the lowest scoring component. We wouldn’t place too much stock in WEI, but is does confirm the overall design: the E-350 is a low power and not very fast CPU paired with a moderately fast GPU. 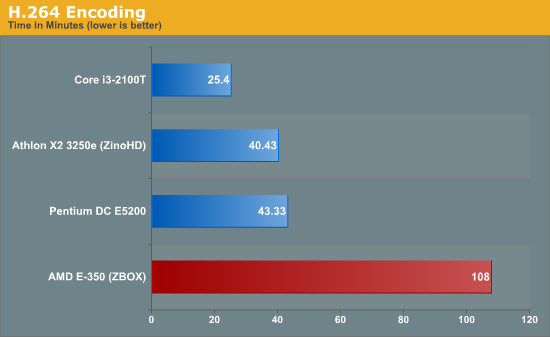 To get a better feel for how that score translates into actual performance, a thirty minute 480i AVC/AC3 file was transcoded using a popular software based h.264 encoder, Handbrake 0.94. Looking at the results above, we can see that the AD03BR-PLUS-U’s CPU is the slowest in the bunch; even substantially outperformed by the first generation Zino HD’s 1.5GHz Athlon X2 3250e. Atom would be slower still, but we’ll bypass that well-trodden path in this discussion. 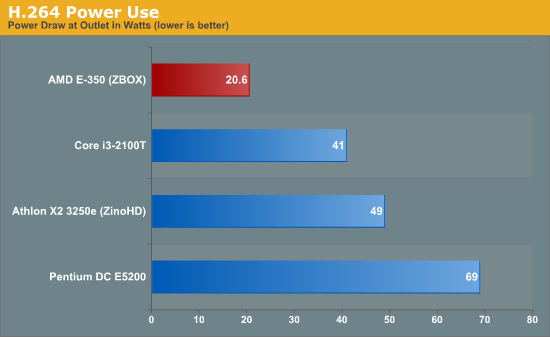 The lack of CPU prowess is not without benefits, however, as the E-350 has a clear advantage in power consumption. It uses only half the power required by the Core i3-2100T under load. So you use half the power and one-fourth the encoding performance, but there’s still the question of media decoding support. If you want to do video encoding on your HTPC, you’ll be better off with a faster CPU.

With the above charts as a baseline, it should be obvious that application load times and menu navigation inside programs like Windows Media Center will be somewhat slower compared to more powerful CPUs, but in day-to-day use the AD03BR-PLUS-U’s performance was not generally a blocking issue. There were some conditions however where it was problematic however, most notably when stressing the on-board network interface device (NIC). This was especially true when using the drivers provided on the CD and on ZOTAC’s website, where playing large files across the network taxed the CPU past the point where flawless playback was possible.

Utilization dropped to a much more manageable level after installing the most recent set of drivers from Realtek, but as we can see from the screenshot above taken after updating the drivers, it is still possible to experience a CPU constraint during playback if secondary activities/processes are not prioritized appropriately.

With a maximum power draw of 25.2W and an idle power of ~10.2W measured at the wall with a Kill A Watt P4460, we can again see where AMD’s Fusion realizes significant benefit from the platform’s design. There are several important points to take away from the above table, with the most important being the relative strengths (GPU) and weaknesses (CPU) of the ZBOX AD03BR-PLUS-U during media playback. Where decoding is possible using the AMD 6310’s UVD, performance is good; on the other hand, when we push those duties onto the CPU performance is not. In the case of HD content, the result is generally unwatchable.

For local content that is not a problem, with DXVA support provided from all of the major commercial players, and from the free/open source software (FOSS) community via MPC-HC as well. Internet content using Flash is only limited by the quality of the media and available bandwidth. Netflix is a different story, however, because it relies on Silverlight for playback, which does not currently support GPU decoding. This should be addressed with Silverlight 5, but it’s not in the current beta release. Interestingly, HDMI 1.4 3D Blu-ray playback is at least partially supported by the driver (i.e. playback begins and the display switches to 3D mode), but it was not watchable so the feature will need to be disabled in the player software if watching MVC discs.