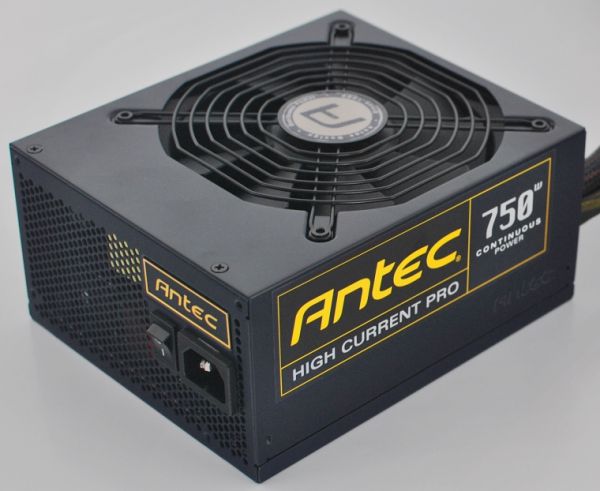 In contrast to most other products the housing of the HCP-750 is coated in anthracite. The fan grille has a pseudo-octagon shape and the front has protruding connector sockets in red and black. The fan is noticeably smaller than the case. The ventilation holes are (as usual) honeycombed and relatively small. This is advantageous for ensuring EMI is within spec but disadvantageous for cooling. A small power switch is located directly next to the power input.

Overall, the build quality of the case is flawless. On almost all sides of the PSU Antec logos can be found. At 180mm long and considering the power rating and modular connector system, the power supply is an average size. Under the cable sleeving you can still see the yellow, orange and red wires.

With four 6/8-pin PCIe connectors the power supply is relatively well equipped. Despite the somewhat more generous cable cross-section it would have been better to split the PCIe connectors onto four separate cables, though that can also create more cable clutter within a case if you need to use all the cables.

The 24-pin, the 4+4-pin 12V AUX, and two of the PCIe connectors are permanently installed at the power supply. This is quite understandable, since this power supply will typically be used with powerful graphics cards. The HCP-750 has six Molex connectors, which should be sufficient for the vast majority of builds. The fact that Antec offers two 8-pin connectors for server motherboards is another great idea. A fixed FDD connector is included in the configuration as well, which will still be useful for some builds.