When it comes to buying a pre-built desktop for the average consumer or gamer, about the only thing the big box manufacturers really have going for them is price. That hasn't stopped them from doing very well, but oftentimes the end user will be better off going to a boutique like iBuyPower for their desktop and enjoying the generally superior build and component quality along with better customer service. 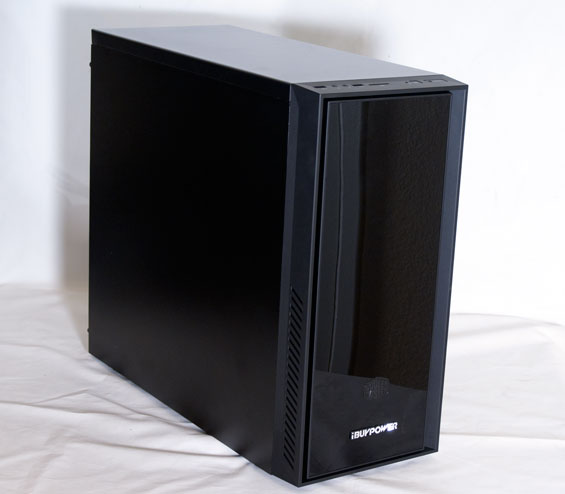 But for small business and enterprise, it can be a whole different ball game, where powerhouses like Dell and HP produce uniquely designed configurations meant for mass deployment...and have the resources to greatly improve support, to boot. We've seen business class machines from both vendors before, but today we have on hand iBuyPower's Professional Series desktop.

Any boutique would probably be remiss to not at least offer some kind of professional solution to end users, and in fact some (like AVADirect) can produce a healthy business going this route by leveraging their own agility in terms of component selection, producing custom builds that bigger OEMs simply aren't readily capable of. Yet the first warning sign comes from iBuyPower's own website, where their Professional Series towers aren't immediately presented; the front page is nothing but gaming machines. In fact you have to hit their "Featured Product" section under the "Desktop" button at the top of the page to even see this line; it doesn't show up under their "Intel Desktop" header. iBuyPower clearly knows who and where their bread and butter are, but a little more publicity for this line could probably go a long way.

For their custom workstation desktops, iBuyPower offers three base configurations, in X58, Xeon (LGA 1155), and Z68 flavors. They shipped us the Xeon version for review, and that's probably the best choice, but what's surprising is how closely this configuration mirrors the HP Z210 we reviewed recently, a desktop that's maybe a third the size of this tower.

The HP Z210 SFF we reviewed shares its core with iBuyPower's configuration: the only difference between the Xeon E3-1240 in our review system and the E3-1245 in HP's is support for Intel's IGP. Likewise, both offer 8GB of ECC DDR3-1333, though iBuyPower opts for two 4GB sticks instead of four 2GB sticks. The NVIDIA Quadro 600 (basically a workstation-class GeForce GT 430) also remains consistent.

Where iBuyPower benefits is by being able to employ a full ATX motherboard complete with all the modern trimmings: USB 3.0, FireWire, dual gigabit ethernet, and even surround sound. They also up the ante by equipping the iBuyPower Pro with a mirrored RAID and a liquid cooler for the processor; the former can be indispensible while the latter is of much more questionable value. What I can't understand is why they elected to eschew including an SSD with this configuration; in fact only their X58 model includes an SSD standard.

Ultimately, though, this configuration winds up being a bit over three bills south of the HP system we tested for a bit more flexibility in the hardware, both in terms of configuring your build and actual I/O, and while HP's Z210 tops out at the Quadro 600, iBuyPower will let you upgrade all the way up to a Quadro 5000.