The launch of the AppliedMicro's Catalina SoC for the NAS market was covered here. In a follow up to the initial coverage, we visited AMCC at CES to look at the various reference platforms in action. 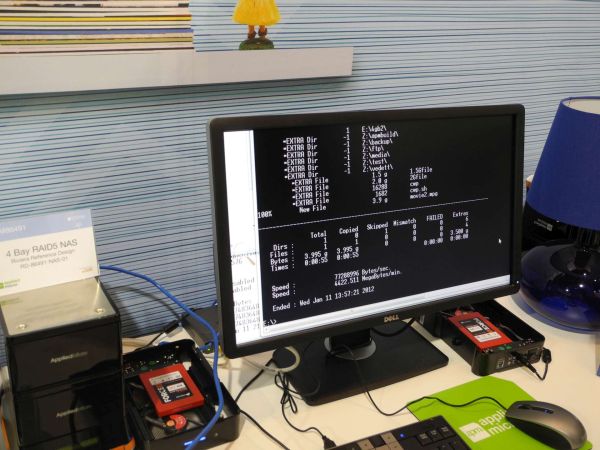 A simple robocopy benchmark was run to test the read and write speeds. Over one GbE port, read speeds of around 110 MBps and write speeds of around 74 MBps were observed. The USB 3.0 bandwidth seemed to be limited only by the SSD and mechanical access speeds. This sort of performance seems to be better than what I observed with the last generation platform in the WD My Book Live. It appears that
designs based on Riviera may give Marvell's NAS platform based designs a run for their money.

Another interesting aspect of Riviera was the unconnected USB 3.0 host / device port on the APM86491. A vendor could easily tweak Riviera to expose this as a device port. In that case, the unit would be a NAS / DAS (Direct Attached Storage) combo. The demo also involved accessing the files on the NAS through an iOS / Android app, but it was nothing that I hadn't already seen in action on the My Book Live. 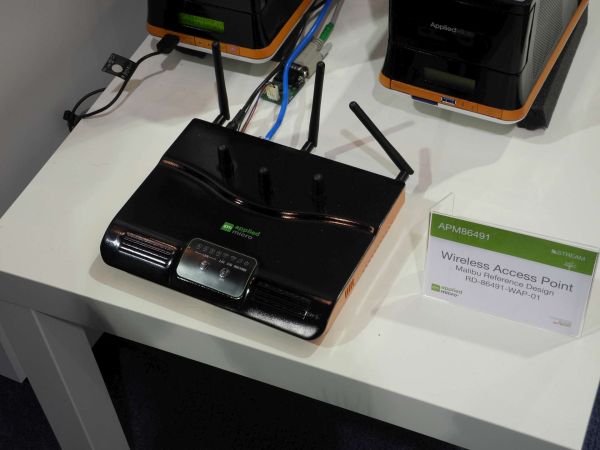 Since the APM86491 includes hardware accelerated network processing, AppliedMicro claimed speeds of upto 650 Mbps in the above configuration (thereby implying that it could scale upto 802.11ac speeds, if necessary).The USB 3.0 host port in the design can be used to attach storage to the router. I haven't seen any router in the market currently based on an AppliedMicro SoC. So, it will be interesting to see if the Malibu platform gets converted into a shipping product.

As a media enthusiast, the most interesting reference design was the APM82181 based PhiPhi. It was a home media server with transcoding inbuilt. We had already looked at the details of the APM82181 in the My Book Live review. 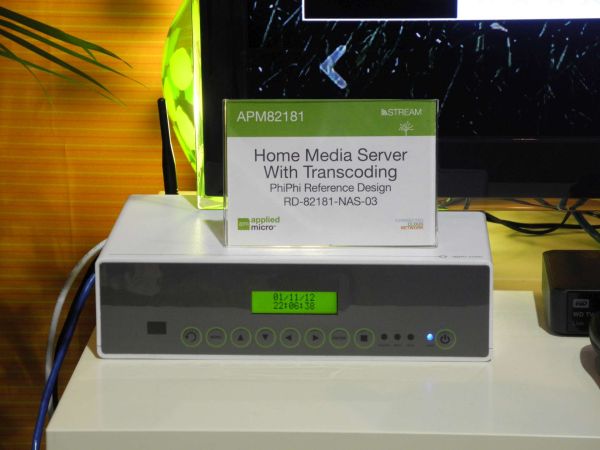 The reference design was a simple 1-bay NAS. It was connected to a network on which a WDTV Live SMP was also connected. The media server program running on the Phi-Phi exposed various files on the NAS to the streamer. When played back, the PhiPhi transcoded the stream to a pre-determined format and sent it to the streamer. A home media server with transcoding inbuilt could enable the device to support
DLNA renderers which don't implement support for a lot of codecs. In hindsight, the demo could have been more impressive if a mobile device capable of only playing a lower resolution stream was used instead of the WDTV Live SMP.

AppliedMicro indicated that one of the PCI-E ports on the SoC was connected to a Zenverge ZN200 chip. Before CES, we saw a joint press release by Zenverge and PacketVideo (developers of the TwonkyServer), indicating that the ZN200 could transcode videos to further expand DLNA support even in the case of very finicky renderers. Another press release by Zenverge suggested that the ZN200 could transcode upto 4 HD streams simultaneously. The only supported formats seem to be MPEG-2 and H.264 on the source side, which could limit usefulness in situations other than those involving just changes in resolution / modification of encode characteristics of MPEG-2 / H.264 videos.

The addition of a hardware transcoder to a media server is an interesting development, but the success of such a product heavily depends on performance and price. Of the three platforms demonstrated, this is the one which intrigues me the most. I am looking forward to the market debut of this interesting reference design.