The 1.1GHz Athlon "Thunderbird" (from here on referred to as the Thunderbird) doesn't boast any new changes over the previous Socket-A Thunderbirds other than the increased clock speed.

As you can tell by the above specs, nothing has really changed with the 1.1GHz Thunderbird. If you're interested in learning more about the above specifications feel free to read our original Thunderbird review. 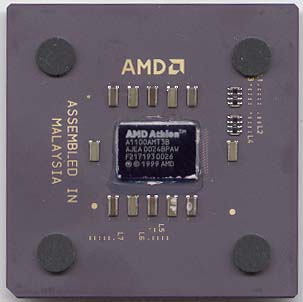 The 1.1GHz parts will most likely be produced exclusively in AMD's Fab30 plant in Dresden and thus will feature copper interconnects. As we mentioned in our Duron review, currently, the only way to differentiate between a Thunderbird manufactured in Dresden with copper interconnects and one manufactured in Austin with aluminum interconnects is by looking at the tint of the die itself. AMD uses a different polisher at their Dresden plant than they do at their Austin plant, the result being that all CPUs that come out of Dresden have a bluish-purple tint, which is what you will see on the 1.1GHz processors.

AMD has updated their Ordering Part Numbers (OPN), which can be used to identify the specifications of any of their PGA processors. The more simplified code is described below as well as a picture of the markings from our 1.1GHz part: